As Build Back Better Is Gutted, Defense Act Is Deemed a “Must-Pass” Bill 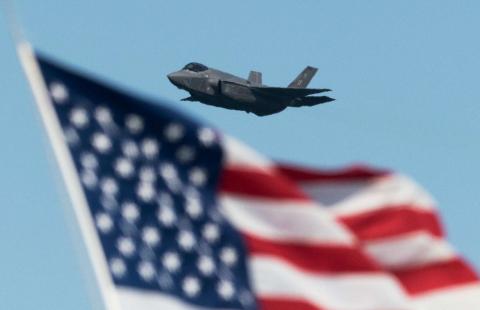 The drinking water in Flint, Michigan. The ashes of Paradise, California. A tub of petroleum that once was the Gulf of Mexico. Rising seas, and storms that eat cities. Black people murdered by cops, protesters gunned down by teenagers with war weapons, and children shot by children in the ersatz safety of their own homes and schools. A lethal pandemic close to completing its second year, fueled by a vapid anti-science movement with the vocal blessing of a disgraced former president.

Ponder all of this, and so much more besides, and I’ll bet my left shoe your absolute last thought would be, “You know what? This country really needs 91 new F-35 Joint Strike Fighters and a pair of new Virginia-class nuclear submarines.” What the hell, it’s only $9.3 billion we’re talking about. Never mind the fact that the F-35 keeps falling out of the sky, and the subs would be of better use studying North Atlantic right whale depopulation off the coast of Cape Cod.

Here we are, though, on the verge of authorizing the spending of $740 billion for items just like that. The annual National Defense Authorization Act (NDAA) of 2022, which authorizes the military budget and establishes defense policy, runs close to 70 fine-printed pages, and reads like a Christmas list compiled by the most terrifying child who ever lived. This is only the stuff we’re selling to ourselves, mind you; our list of global arms sales would fell a forest for the paper.

Good luck getting all that down the chimney, Santa.

NDAAs notoriously establish dangerous military policy while paving the way for sky-high defense spending (which gets locked in through subsequent defense appropriations bills). The NDAA of 2001, the post 9/11 document that allows the U.S. to basically kill and invade everything, everywhere, at any time, forever, was the gateway to torture, total surveillance and two decades of war in Afghanistan. The 2003 NDAA was basically a “Yeah, what that said” document, with specific language added that gave us two decades of war in Iraq. There has been some noise about repealing these two NDAAs but yeah, no, Forever War is still Forever War for the time being.

Amazingly enough, this year’s NDAA contains one potentially useful policy. The new authorization’s focus on “Combatting Sexual Assault in the Military” at least acknowledges the crisis of sexual violence in the armed forces. The new policy initiatives “[m]oves the decision to prosecute a serious crime out of the chain of command and to trained military prosecutors.” This is analogous to bringing in an outside prosecutor to handle officer-involved shootings, so local DAs don’t have to investigate or indict their own cops. That being said, the fact remains that no change in prosecution policy can eradicate the sexual violence that is an intrinsic part of U.S. militarism and imperialism.

At present, Congress is debating the 2022 NDAA along with President Biden’s signature Build Back Better Act, debt limit legislation, and funding to keep the federal government operating. The deadlines are piling up, and the pressure on Democratic lawmakers is intense. It is worth noting, however, that between the BBB Act and the NDAA, only the NDAA gets labeled as “must-pass” by the corporate news media.

“Must-pass”? The term makes it sound as if the preposterous might of the U.S. military will melt like a microwaved Peep if the bill isn’t signed before Congress blows town for the holidays.

“Must-pass”? The term makes it sound as if the preposterous might of the U.S. military will melt like a microwaved Peep if the bill isn’t signed before Congress blows town for the holidays. Between the nukes and the Navy SEALS, I think we have the “extreme violence in all directions simultaneously” capacity well handled. Makes you wonder if there’s money involved, some old system of graft, plunder and revolving doors that manages to scratch its own back while eating its cake, too. Maybe someone should look into that or something.

The Build Back Better Act doesn’t get the “must-pass” treatment, of course — yet another testament to the perverse priorities of the people running the show. Parents need affordable day care, Medicare recipients need help with their hearing, families need paid family leave, and the climate needs 10,000 times the help included in the bill, but it’s a beginning. If the environment is poisoned for all living things, who’s going to fly (crash) all those shiny F-35s? Didn’t think of that one, did ya, Mr. Manchin?

Passage of the NDAA is an annual festival of performative bipartisanship — the bills always sail by massive margins — but this year is a little different. With Democrats “in control” of both the House and Senate, Minority Leader Mitch McConnell has gone full guerrilla in his attempts to thwart Biden’s agenda. This year’s NDAA has fallen victim to this tactic, with McConnell rubbishing its road to passage in order to jam the Democrats with so many deadlines looming. There is actual concern the bill might not be on the president’s desk by the New Year.

This would suit McConnell just fine; in his vision of a perfect world, the BBB Act fails with Manchin’s help, the NDAA does not get done before 2022, the federal government shuts down, and the debt ceiling is breached. He can then gleefully blame Democrats while waiting for the midterms like a cat who hears the can opener cranking in the kitchen. In the meantime, the ocean is coming, and the kids got nowhere to go. “Must-pass,” indeed.

William Rivers Pitt is a senior editor and lead columnist at Truthout. He is also a New York Times and internationally bestselling author of three books: War on Iraq: What Team Bush Doesn’t Want You to Know, The Greatest Sedition Is Silence and House of Ill Repute: Reflections on War, Lies, and America’s Ravaged Reputation. His fourth book, The Mass Destruction of Iraq: Why It Is Happening, and Who Is Responsible, co-written with Dahr Jamail, is available now on Amazon. He lives and works in New Hampshire