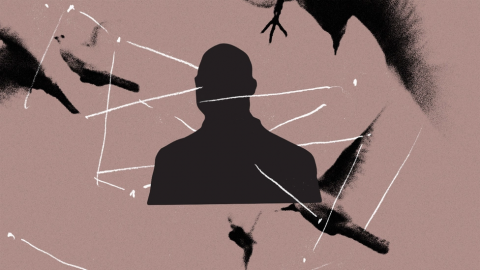 One evening about seven years ago in St. Andrews, Scotland, I was walking home from a long day of doctoral research. Most people out that night were not concluding studies. A scattered few exited the ancient city’s meager collection of pubs and restaurants.

That ordinary night shifted when a drunken man stumbled out of one of those bars and spotted my Black body. He presented no manifesto. I have no access to the soul-distorting experiences that led him to look upon me with contempt, but seconds after he saw me, he blurted out that most famous of anti-Black racial slurs. I had never been verbally accosted in a British accent and didn’t know that word was international.

I performed the assessment that Black folks have performed for centuries. How much danger am I in? Then I remembered I was in Scotland, and therefore the person probably did not have a gun. So I gave him my best cold stare, ready to defend myself if needed. He apparently performed a similar assessment, thought better of it, and moved on. There was nothing particularly special about that day. I had done nothing to antagonize him. I had simply been Black on what may have been a Tuesday, and for that reason alone I was a target of someone else’s rage.

The 10 Black people murdered in Buffalo, New York, lived in a country with a different set of laws than those of the United Kingdom: When the white supremacist Payton Gendron drove 200 miles from his home to a grocery store in a Black neighborhood in Buffalo, he was well armed. They died in a Tops grocery store because they were Black and wanted to buy food on a Saturday in America.

The massacre unleashed a wave of Black anger and grief. But we don’t know exactly where to put it. Are we mad at the particular person who committed this heinous act? Are we angry with the media personalities who traffic in explicit and implicit anti-Black racism? Are we infuriated by the long history of these events that stalk our people? Are we grieving the innocent lives lost? Perhaps we are upset with churches that seem indifferent to cries of Black pain, or perhaps we hurt because this incident calls to mind our own less deadly experiences of racial trauma. Or perhaps we are reeling because we know that friends and neighbors will denounce this particular evil, but will soon be at the school-board or church-council meetings calling every discussion of racism “critical race theory” and therefore a threat to the republic.

I am not sure there is a single source of the pain. I do know that being Black and hungry in America is sufficient to get you killed. Trayvon Martin died on his way home from picking up some Skittles and a cold drink at a convenience store. The encounter with a white woman that would lead to Emmett Till’s murder occurred in a store where he had gone to buy candy.

Some might suggest that there is no connection among these three incidents or between the fact that Payton Gendron was apprehended peacefully after allegedly shooting 13 people and that many unarmed Black Americans have died at the hands of police and vigilantes. I say they are connected by the hazards that attach to Black life, which stand in stark contrast to the instinctive honor given to other bodies.

But connections are anathema.

We are forbidden to notice that Black Americans were murdered while in search of sustenance and Dylann Roof was fed Burger King after his racially motivated attack on a Black church. We must deem it a coincidence that the Black church, a key element of Black communal life, was targeted by Roof in 2015 and the Ku Klux Klan during the height of the civil-rights movement in 1963. We must turn our eyes from the fact that Gendron’s wild claims about “replacement theory” are frighteningly similar to the “You will not replace us” chants that occurred in Charlottesville in 2017.

Payton Gendron’s actions must remain alone, disconnected from the recent history of racialized violence. He had nothing to do with that slaughter at Mother Emanuel in Charleston, South Carolina. He bears no relationship to the deaths of Ahmaud Arbery, Breonna Taylor, and George Floyd. He cannot be tied to the larger history of anti-Blackness, whose roots lie in the slave trade and later the lynching tree. Jim Crow, that ancient southern terror, can have nothing to do with northern Buffalo in 2022.

Gendron’s actions cannot be considered in the context of ongoing efforts to toss out of schools the very historical, legal, and theological tools that would equip us to understand the connections between the present moment and the ones that preceded it.

But if his actions are linked to American history and current culture, then we must ask about the roles people play in creating or maintaining a culture of anti-Black racism. One person pulled the trigger that ended those lives, and he bears the ultimate responsibility. But culture makes certain ideas and implications thinkable and actionable.

To assert that Payton Gendron’s actions were connected to a past and present, then, is not merely an intellectual accent to an idea; it is a revolution with far-reaching political and social implications that many are not willing to endure. Only if we can see these connections do we have a chance of healing.

I came home that evening in St. Andrews, Scotland, and had dinner with my family. I didn’t immediately tell my wife about the incident, because I did not want it to ruin our evening. The story felt too complicated for my elementary-school-age children. Dad smiled and pretended.

But someone had to explain to the children and grandchildren left behind by the dark events in Buffalo. Those families didn’t have the option of ignoring what happened. They will not eat together again.

A question remains for those who still reside in this republic: What do we owe the deceased in Buffalo and all those who preceded them? It cannot be anything less than pursuing the truth and unveiling all the interconnected evils that led to their tragic end.

If we have the political will and focus, society can put in place laws that limit gun violence. Churches and other groups can speak with one voice about the evils of racism and the cultural norms that allow them to flourish. If we do that seemingly impossible work, the outcome might be different than we expect. Humans will remain startlingly capable of evil, and we will still have acts of violence. But if racial violence occurred in the context of a more just society, that long-sought myth might finally become flesh. We would have an isolated incident.

Esau McCaulley is an associate professor at Wheaton College. He is the author of Reading While Black: African American Biblical Interpretation as an Exercise in Hope and Josey Johnson's Hair and the Holy Spirit.