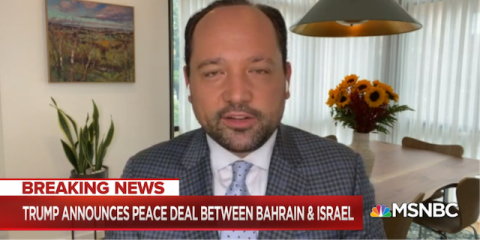 Corporate media outlets such as Forbes (9/11/20), Bloomberg (9/15/20), CNN (9/15/20) and the Washington Post (9/16/20) have described recent accords that normalize Israeli relations with the United Arab Emirates (UAE) and Bahrain as “peace” deals. This is a misleading label to apply to agreements that help cement a belligerent military alliance against Iran, and allow violence against Palestinians, Libyans and Yemenis to continue.

MSNBC aired a segment (MSNBC Live, 9/11/20) headlined “Trump Announces Peace Deal Between Bahrain and Israel,” during which Washington Post White House bureau chief Philip Rucker referred to the agreement as a “peace accord.” Later, Rucker implied that the term also applied to the Israeli/UAE pact, and claimed that it was a move in the direction of peace across West Asia, saying that “these are rather incremental steps…. This is not an end, of course, to fighting in the Middle East or [the arrival of] peace across the region.”

have also made [President Donald] Trump’s “maximum pressure” policy of economic asphyxiation against Tehran more effective and painful than his predecessor’s sanctions campaign. Increased Arab collaboration with Israel and the United States has helped the latter obstruct clandestine financial channels and escape valves traditionally used by Iranian authorities and institutions to evade US sanctions.

For MSNBC, and for the Post’s Rucker, “peace” means stifling Iran’s economy more effectively. In this regard, it’s not just that the deals aren’t “steps” towards peace; it’s that they are steps toward ratcheting up the grave human suffering that sanctions have inflicted on Iran, including seriously hindering the Iranian population’s access to medical necessities during a pandemic (FAIR.org, 4/8/20).

To the Wall Street Journal editorial board (9/15/20), the UAE and Bahrain making “peace” deals with Israeli is a “win-win” and its “most obvious benefit, besides strategic cooperation against Iran’s regional mayhem, is economic.” What “Iran’s regional mayhem” is remains a mystery—it’s a safe bet that it has something to do with being an obstacle to US designs—but it’s remarkable that the “win-win” scenario of this “peace” entails the US government pushing to sell “cutting-edge weapons to the Emirates, including F-35 fighter jets and Reaper drones,” a package that “also includes EA-18G Growler jets — electronic warfare planes.”

The Trump administration “do[es] not dispute that after years of American refusals to sell F-35s to the Emiratis, the change in position is linked to the diplomatic initiative,” reported the New York Times (9/15/20). Apart from the possibility of using these warplanes to menace Iranians, these weapons can also be deployed in the catastrophic war on Yemen, where the UAE is a major player, and in the devastating proxy war in Libya (In These Times, 8/18/20), where the UAE has also unleashed its jets (New York Times, 9/15/20). Facilitating a military build-up is a most curious exercise in “peace.”

Bahrain is also a party to the US/Saudi aggression against Yemen, which means that, like the UAE, it could be rewarded for formalizing relations with Israel by being allowed to buy more US weapons that it can use against Yemenis. 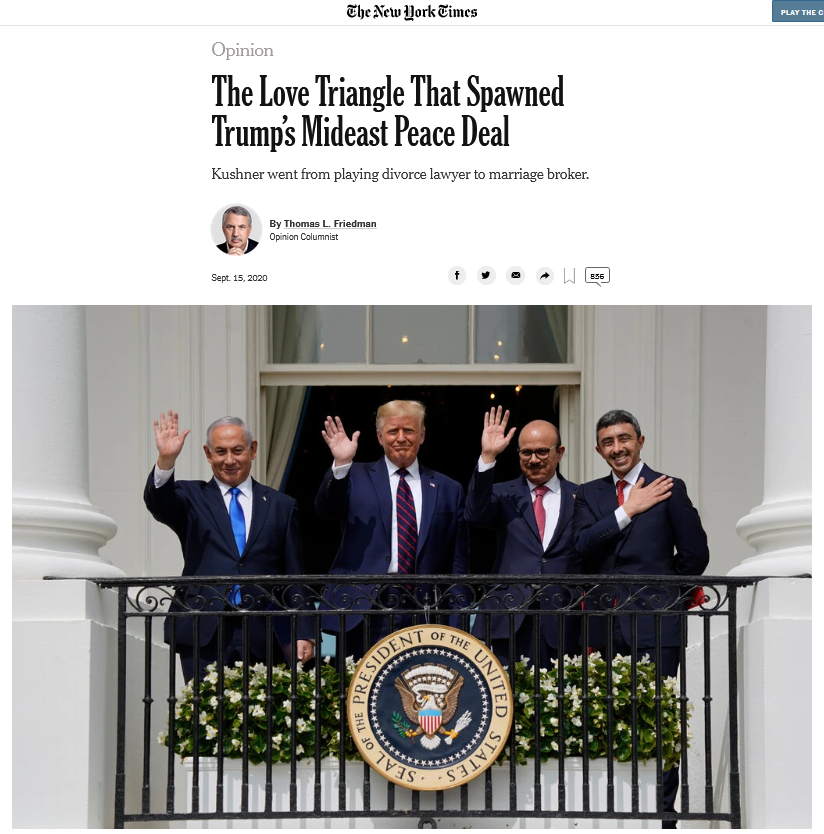 The New York Times‘ Thomas Friedman (9/15/20) compared the White House’s Jared Kushner to a divorce lawyer who discovered that “Mrs. Israel was having an affair with Mr. Emirates, who was fleeing an abusive relationship with Ms. Iran.”

These “peace” agreements are “an honest triumph,” in the eyes of New York Times columnist Bret Stephens (9/14/20), and “the right thing,” according to his op-ed page colleague Thomas Friedman (9/15/20).

However, days after Israel and the UAE agreed to establish full diplomatic relations, the heads of both countries’ spy agencies met to discuss cooperation on “security” (Al Jazeera, 8/18/20). In the language of countries with egregious human rights records like Israel and the UAE, “security” is a euphemism for violent repression. The Israeli/UAE friendship predates the recent accords, but any deepening of their “security” cooperation is unlikely to be good news for Palestinians, Yemenis or Iranians, or for those who live in countries where Iran has alliances, such as Syria and Lebanon. Nor, for that matter, is it likely to benefit people living under the UAE’s dictatorial monarchy. (Less than 12% of the UAE’s residents are considered citizens, with the rest treated as expatriate workers, regardless of whether they were born in the country or not.)

Strengthening Israeli/UAE “security” cooperation could be bad news for Libyans, too, in that Israel is on the same side of the war in that country as the UAE, a conflict that continues because of intervention by these and other outside powers (In These Times, 8/18/20).

Nor is this increased “security” coordination likely to be good news for Palestinians, Yemenis or Iranians, or those who live in countries where Iran has alliances, such as Syria or Lebanon. Nor, for that matter, is it likely to benefit people living under the UAE’s dictatorial monarchy. (Less than 12% of the UAE’s residents are considered citizens, with the rest treated as expatriate workers, regardless of whether they were born in the country or not.)

In the same vein, the Israel/Bahrain pact may help Bahrain’s reactionary monarchy entrench its power domestically and “crush any resistance to authoritarianism or efforts towards freedom and democracy” for the Bahraini population (Al Jazeera, 9/13/20).

may be good news for ordinary Palestinians…. It isn’t crazy to think that peace might come from the outside in: from an Arab world that encircles Israel with recognition and partnership rather than enmity, and which thereby shores up Israel’s security while moderating Palestinian behavior. If that’s right — and if states like Oman, Morocco, Kuwait, Sudan and especially Saudi Arabia follow suit — then this summer’s peace deals might finally create the conditions of viable Palestinian statehood.

The accords cannot plausibly be connected to a peaceful resolution to the Palestine/Israel conflict (and certainly not to a just one).  The agreements do nothing to inhibit Israel’s violent dispossession of Palestinians, whom Stephens regards as children in need of having their “behavior” “moderat[ed]” by their colonizers and the colonizers’ cohorts.

As part of the deal with the UAE, Israel said it would temporarily suspend its plan to formally annex 30% of the West Bank, but made no promise to halt its illegal stealing of Palestinian land through settlement construction. Nor do the normalization deals involve Israel “moderating” its “behavior” by agreeing to stop bombing Gaza, to lift the merciless siege depriving Gaza’s inhabitants of fuel and medical essentials, to cease torturing Palestinians, to end police terror of Palestinian citizens of Israel, or to permit the return of the refugees Israel has ethnically cleansed and is keeping out through force of arms.

Stephens fails to offer any convincing reason that “peace might come” to Israel/Palestine from a deal that fails to address these types of Israeli violence, which are far and away the most deadly and most widespread forms of violence in the conflict. Instead, the UAE and Bahrain are openly blessing Israeli brutality and creating the possibility of it getting even worse by taking out of the equation a tool that could have helped restrain Israel, namely the costs of being boycotted by other states.

Contrary to corporate media assertions, these US-managed agreements between three of its vassal states have little to do with “peace” and everything to do with enabling the smooth execution of despotism, war and a ruthless colonial enterprise.