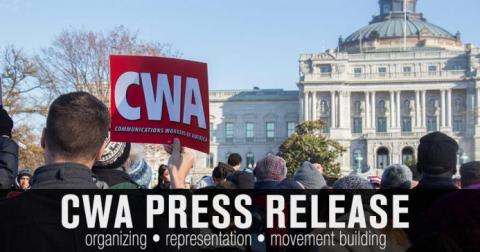 Washington, D.C. -- Statement by the Communications Workers of America on the report released today on offshoring of good jobs by U.S. government contractors.

Keeping good jobs in the U.S. is a top priority for working people. Corporations that send call center jobs and other good jobs overseas shouldn’t be rewarded with federal contracts.

Despite the campaign promises of President Trump, that’s exactly what’s happening. The new report by Good Jobs Nation and Public Citizen’s Global Trade Watch quantifies the extent of offshoring by the largest U.S. government contractors as well as the absence of action by the Trump administration to keep good jobs in the U.S.

CWA has exposed the offshoring of good call center jobs at companies including T-Mobile, AT&T, Verizon, Xerox, Sykes Enterprises and many more. We’ve joined with Senators and Members of Congress who have proposed legislation to stop rewarding offshoring and with those who have called on President Trump to sign an executive order that would help keep good call center jobs in the U.S.