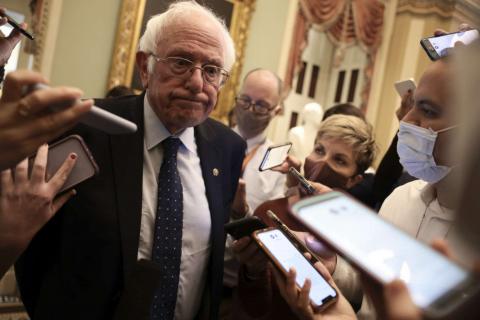 "Fuck the managers. Fuck this company. Fuck this position,” yelled 19-year-old Shana Blackwell over a Walmart intercom last year. “I fucking quit!” She called staff “racist” and sexist then walked off the job. In her wobbly cellphone video, pride and defiance filled her eyes like flames. Her tweet was one of the most viral in 2020.

Blackwell’s Quit-Heard-Round-the-World was followed by Beth McGrath in September 2021, who also commandeered a Walmart intercom, railed against poor treatment, gaslighting and ended with a heartfelt, “Fuck this job.”

Rising worker rage fills headlines and empties factories and stores. In September alone, over 4.4 million Americans quit. Strikes rattled companies from Kellogg’s to John Deere. Labor demanded higher wages and better benefits, more vacation and retirement. Yet the very living conditions workers have been fighting for may be won or lost not just on the picket line, but in Washington, D.C., where President Joe Biden’s $1.75 trillion Build Back Better bill is being gutted by corporate Democrats.

Workers need a win. Workers need child care, health insurance, affordable housing, elder care — all of which are in the stripped-down bill. One obstacle is the greed of paid-off Democrats. The other is the lingering neoliberal ideology that frames Build Back Better as an “entitlement” or an “investment”; it’s neither, it is just the beginning of the long overdue wealth redistribution owed to the working class.

Imagine waking up in a home you can afford, taking your child to free daycare, kissing an aging parent as the free nurse arrives. Imagine working a union job building electric cars while taking a free class at the local college. Finally, you get home and look around the dinner table, and your kid says at school she learned that greenhouse gases in atmosphere are dropping to safe levels, and you feel hope again.

The first $6.5 trillion version of Build Back Better, proposed by Independent Vermont Sen. Bernie Sanders and passed in the House, was comprehensive. It made good-paying union jobs available to the people. But in negotiations with the Biden administration, it was halved to $3.5 trillion to pass the bottleneck of corporate Democratic Senators Joe Manchin of West Virginia and Kyrsten Sinema of Arizona. As the bill nears the finish line, they further winnowed it to $1.75 trillion.

On November 19, the House passed Build Back Better, 220 to 213. The version that was passed ponies up nearly $400 billion for universal prekindergarten and affordable child care programs over six years, extends the child tax credit for another year, puts aside about $200 billion to provide paid family and medical leave starting in 2024, makes Obamacare more affordable, and puts $150 billion toward affordable housing.

But the Senate version gutted paid family leave. Dental and vision were cut. Free community college was cut. Tax credits for electric vehicles were cut. Lower drug prescription prices were cut. The question is, why?

“I don’t believe we should turn our society into an entitlement society,” said Senator Manchin. In that one sentence, he summed up the ideology of patrimonial capitalism. Those ideas are more important than his payoff by the coal industry, or Senator Sinema’s $750,000 virtual bribe from pharmaceutical companies and more from GOP donors to her campaign.

Even venal greed needs ideology to justify it. So, when Manchin invoked “entitlement,” it connected to a conservative mythos from center-right warnings of runaway inflation and “big government” to far-right nail-biting over “socialism.” It implicitly tapped into the imagery of the undeserving poor, a staple of Republican rhetoric from former President Ronald Reagan’s racist stump speech on “welfare queens” to former House Speaker Paul Ryan’s lament about “lazy” inner city (read Black) men.

Conservatives routinely warp imagery of New Deal-style policy and workers. They portray it as the start of a “New World Order” where the state seizes guns, flags and freedom. In the 1990s, the Republican Party fear-mongered its base with tales of Democrats ceding U.S. sovereignty to the United Nations, whose black helicopters would land on suburban lawns like the sequel to Red Dawn. During the Barack Obama years, it was “death panels” where “big government” health care would decide if grandma lived or died. Today, it is Republican Sen. Rand Paul from Kentucky warning Fox viewers about Build Back Better: “every time [socialism has] been tried in world history it always ends up with state-sponsored authoritarianism and violence.”

In lock-step with the image of “big government” is the “worker,” who is not “entitled” to the basic standard of living in a modern world. In neoliberalism, workers are taught to believe precarity is a positive state of mobility: in which unstable hours, or endless freelance work or gig economy labor is the path to the American Dream. Jay-Z made this famous when he rapped on the track “Diamonds From Sierra Leone (Remix)”: “I’m not a businessman / I’m a business, man.”

Further right, it seemed former President Donald Trump ushered f populism to the stage, but the Republican Party’s tax cuts and union-busting show a pattern closer to the “Mudsill Theory” in slaveholder James Hammond’s 1858 speech, “There must be a class to perform the drudgery of life…. Such a class you must have, or you would not have that other class which leads progress, civilization, and refinement. It constitutes the very mud-sill of society.”

The obstacle in front of the working class achieving real gains is not the personal greed or preening antics of Manchin and Sinema. It is the whole atmosphere of ideas that, like cracked and dirty prisms, distort the reality of workers’ lives into Hell.

A New York Times editorial advocated inching right, to the “center.” On CNN, Democratic Rep. Abigail Spanberger from Virginia said, “Nobody elected [Biden] to be FDR.” Meanwhile, The Nation and Jacobin took the left line that Democrats failed to meet the material needs of the working class. Panicked at more losses, Democrats quickly passed the $1.2 trillion infrastructure bill, but progressives fear they gave up leverage to push the $1.75 Build Back Better Act, and if so, the chance to brighten the lives of workers will be lost for a long, long time.

The gamble of each position comes down to a question: What do people want? In poll after poll, pieces of Build Back Better are popular. Yes, tax the rich. Yes, to dental and vision covered by Medicare. Yes, to care for the old. Yes, to clean energy jobs. Yet even though working people feel deeply their daily needs, some are misguided by the same neoliberal ideology in D.C. — a distrust of “big government” — that is, until they experience the benefits.

“You need the New Deal times two,” said economic professor Dr. Richard Wolff in a Truthout interview. “The U.S. has had a public crisis before like the Spanish Flu of 1918 and the Great Depression, but never both at the same time. We need a government response adequate to the size of the problem.”

When asked why the left finds it difficult to push Build Back Better and social democracy in general, Wolff pointed to the effect of decades of neoliberalism. It hardened a worldview of market fundamentalism, privatization, shredding of welfare and gutting unions — all of which left workers with a generational case of false consciousness.

“The left has been in decline for 60 years,” he said. “The percentage of unions in the private workforce is 7 percent. We’re at a historic low of organizing. Sixty years! We are a culture of holding the line. But something remarkable is happening: We’re shaking off the old ways. Look at the strikes at Kellogg’s, Starbucks, John Deere and Amazon.”

Workers no longer think of a good and decent life as merely an “entitlement.” It is a debt owed by the ruling class.

When Wolff surveys the wreckage left by COVID, he sees a break from the past that accelerated a left turn. “People look at the world differently after trauma,” he said. “For 18 months, 82 million people experienced some period of unemployment. It was a trauma, individually, and a trauma for their family. No one event guarantees a particular outcome; it is over-determined by context. One response is to become zombies. Another is resistance; you see it in the historic wave of quitting. Another is the number of strikes; these are the workers who to make their lives better.”

The problem, Wolff says, is that the new labor militancy will face reaction from employers wanting to recoup lost profit — say, by hiring three workers for four jobs, so new hires end up laboring more for less. “What the left has to do is show that the problem is with the system; you quit this job, the next will be the same. Even a strike victory is immediately watered down. You’re caught in a system.”

Wolff’s decades as a Marxist economist gave him a vantage point to map where we came from and where we’re going. What’s clear is that the U.S. worker passed through a trauma; friends and family got sick from COVID, more than 700,000 died; personal debt increased; frontline workers risked their lives in food delivery, hospitals and transportation to keep the nation going. It changed us deeply. Now workers no longer think of a good and decent life as merely an “entitlement.” It is a debt owed by the ruling class.

The word was stapled like a medal on workers amid the pandemic. Heroes. We saw in the media, nurses with faces bruised from back-to-back shifts to save lives. We saw bus drivers and flight attendants put themselves in harm’s way to keep the world from totally falling apart. The selfless action of the working class forces an opening in neoliberal ideology for a new image to become the basis of a new politics. One that can shift the balance of power during Striketober and the negotiations over Build Back Better.

The frame of workers today resembles the image of them post World War II, when the modern European welfare state was being built on the rubble. The soldiers who came back were hailed as heroes, and, as in Philip Zec’s famous cartoon, the war-time suffering of the masses pushed social democrats and labor parties across the continent and in Britain to set up national welfare. The devastation of COVID and the quarantine coma of the global economy has recreated a similar moment in history, where frontline workers and the masses are demanding a better world and class reparations.

For decades, neoliberalism has defined the political imagination. The workers quitting and going on strike are dismantling it. The more the left can channel labor militancy into a fight for Build Back Better, the quicker we can exorcise the last remnants of that lie that the working class must silently suffer exploitation for the mediocre pleasures of bourgeoise life. Everything in the world was made by a worker, which is why Karl Marx said in the Communist Manifesto that, “They have a world to win.”

Nicholas Powers is the author of The Ground Below Zero: 9/11 to Burning Man, New Orleans to Darfur, Haiti to Occupy Wall Street, published by Upset Press. He is an associate professor of English at SUNY Old Westbury and has been writing for Truthout since 2011. His article, “Killing the Future: The Theft of Black Life” in the Truthout anthology Who Do You Serve, Who Do You Protect? coalesces his years of reporting on police brutality.