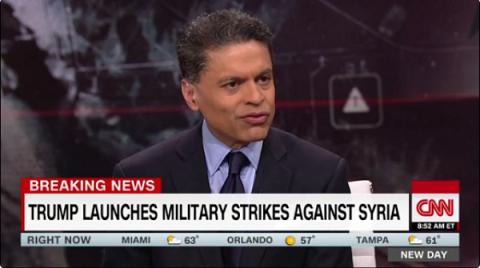 “I think Donald Trump became president of the United States” last night, CNN host Fareed Zakaria said when asked about the significance of Trump’s airstrikes on Syria (New Day, 4/7/17). “I think this was actually a big moment.”
[...]
His explanation is worth quoting at length for its distillation of the classic pundit attitude toward presidential violence:
Because candidate Trump had said that he would never get involved in the Syrian civil war. He told President Obama, you cannot do this without the authorization of Congress. He seemed unconcerned with global norms.

President Trump recognized that the president of the United States does have to act to enforce international norms, does have to have this broader moral and political purpose. President Trump realized, as every president has for many decades now, that presidents always believe they have inherent legal authority as commander in chief. And they don’t need to go to a pesky Congress every time they want military force…

Note the assurance with which Zakaria insists that a military attack on a sovereign state, unauthorized by the United Nations and unjustifiable in terms of self-defense, signifies a new respect on Trump’s part for “global norms” and “international rules.” Clearly, for Zakaria as for most pundits, the norm is that international law does not apply to the president of the United States–a doctrine that is usually referred to by the euphemism “American exceptionalism.”
(From Jim Naureckas, FAIR, 4/7/17)