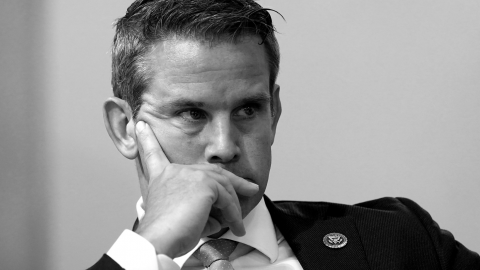 The Illinois representative thought the GOP was filled with democracy-loving internationalists. Now he sees the party as a corrupt shell of itself.

Political courage is a fascinating phenomenon, particularly at moments when it is largely absent. Which is why I’m so interested in the imperiled career of Representative Adam Kinzinger, the Illinois Republican who has described Donald Trump’s demagogy for what it is—a danger to the republic—and who possesses spine enough to excoriate members of his own party for succumbing to Trump’s imbecilic authoritarianism.

As Anne Applebaum described so well in her Atlantic cover story last year, “We all feel the urge to conform; it is the most normal of human desires.” Her essay, “History Will Judge the Complicit,” made the argument that collaboration, and not dissent, is the default posture of frightened humans, including and especially careerist politicians. Dissent can often lead to social and political death (and sometimes, physical death), and, as we’ve learned in the months following the insurrection of January 6, most Republicans would sooner cast people like Kinzinger into the wilderness than risk ostracism.

“I don’t have a tribe,” Kinzinger told me when we spoke earlier this month. “The good thing is, I don’t really care. The only reason this hurts me is that it reminds me of how frigging crazy the Republican Party has become. It’s not my tribe anymore.”

I first met Kinzinger in early 2014, when he was still very much part of his tribe; he was a protégé of Senator John McCain in that long-ago period when McCain himself was the country’s leading Republican. Kinzinger and I were both part of a group McCain brought to the Munich Security Conference, which is a kind of Burning Man for defense ministers. McCain, who attended Munich regularly, was in some ways the king of the conference, and officials of dozens of nations sought him out for advice, favors, blessings, and photos. He enjoyed himself very much, and, even at a German national-security conference—definitionally a gathering of very uptight people—he was his usual semi-anarchic self. During a roundtable discussion with the national security adviser of India, McCain introduced Kinzinger by saying, “This is Adam Kinzinger. He’s Henry Kissinger’s bastard son.” The Indian national security adviser smiled gamely.

That night, a small group of us visited a crowded Munich beer hall. Memory is a bit hazy here, but I do remember a large, drunk German falling on Senator Lindsey Graham. “There were a lot of people falling on top of each other,” Representative Ted Deutch, a Democrat from Florida, remembers. Deutch and I, both members of a particular Semitic tribe, were amused to find ourselves in a Munich beer hall, and I recall Mike Pompeo, then a congressman from Kansas, promising to help us escape in case things went the way things used to go in Munich. I also remember many jokes about putsches.

Kinzinger was in complete alignment with Graham and Pompeo back then—“I just assumed that we would be the core of people holding the torch for American leadership”—and I asked him why he thought they subsequently turned Trumpist.

“Power,” he said. “I think it’s just power. Pompeo convinced himself that he would help temper some of the more isolationist tendencies of Trump, and then he bought into the idea that he could one day be president. And Lindsey—well, Lindsey just needs somebody to tell him where to go, a strongman. McCain was that guy. Now it’s Trump. It’s sad.”

I asked Kinzinger if he thought he had been naive about the people who now lead the party. “You know, you always think that everyone has a red line. No matter how much politics a person can play, there’s a red line that people can’t cross. I was naive. There are some people who only care about access to power. I’m still coming to terms with this.”

Kinzinger, along with another apostate, Liz Cheney, serves on the House committee investigating the events of January 6. His decision to join this Democratic-led committee caused some of his Republican colleagues to worry (or to publicly perform worry) that he had become a spy in their midst.

“Madison Cawthorn can invoke coming bloodshed, and Paul Gosar can flirt with white nationalism,” he said, naming two of his more extremist colleagues, “and they’re signing a letter asking to have me kicked out of the caucus. This is how far the Republican Party has fallen. They call me a RINO”—a Republican in Name Only—“but I haven’t changed. The Republican Party has changed into an authoritarian Trump organization. They’re the RINOs. Trump is a RINO.”

Kinzinger says he’s at peace with the idea that he may be voted out of Congress by his fellow Republicans. “I believe in God. He knows what’s good or bad for me. If I lose my seat by doing the right thing, I’ll be fine.”

The story of the Republican Party’s descent into Trumpist authoritarianism is one The Atlantic is compelled to tell, and our writers have been telling it well, with moral urgency and a commitment to the notion that reality is describable and provable, for more than five years. This is a delicate assignment for The Atlantic. We were founded with the promise that we would be of “no party or clique,” and we try to make good on that promise. It is difficult, though, when one of the country’s two major parties is violating the norms of democratic behavior. We will continue to hold the Democratic Party accountable as well, when accountability is needed, and we will continue to publish writers—conservatives, Republicans, ex-Republicans—who are thinking in interesting ways about the future of their party and country.

Here are just a few of the notable pieces we’ve published on the subject of this crisis. Earlier, I recommended Anne Applebaum’s cover story on complicity and I recommend all of her work—and I would also point you to “The Road From Serfdom,” by the Harvard scholar Danielle Allen, about how citizens themselves can revive our democratic traditions. I’d also recommend Adam Serwer’s new piece, “The Five Coup Schemes of Donald J. Trump” (I think the headline is self-explanatory!); Yoni Appelbaum’s trenchant “How America Ends”; and Adrienne LaFrance’s examination of Facebook’s role in democratic decomposition, “Facebook Is a Doomsday Machine.” One other piece to recommend: James Mattis’s “The Enemy Within,” in which the former secretary of defense writes, “Our politics are paralyzing the country. We practice suspicion or contempt where trust is needed, imposing a sentence of anger and loneliness on others and ourselves. We scorch our opponents with language that precludes compromise. We brush aside the possibility that a person with whom we disagree might be right. We talk about what divides us and seldom acknowledge what unites us. Meanwhile, the docket of urgent national issues continues to grow—unaddressed and, under present circumstances, impossible to address.”

Mattis’s piece was published two years ago. Despite the temporary defeat (or marginalization, at least) of Trumpism, nothing much has changed.

Jeffrey Goldberg is the editor in chief of The Atlantic and a recipient of the National Magazine Award for Reporting. He is the author of Prisoners: A Story of Friendship and Terror.