‘We do not need a massive increase’: Sanders criticizes Biden’s $813 billion military budget 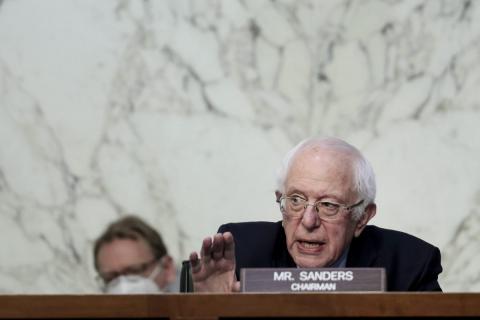 Sen. Bernie Sanders on Monday criticized President Joe Biden’s request for an $813.3 billion military budget in the next fiscal year as excessive, noting that the United States already spends more on national security than “the next 11 countries combined.”

“We do not need a massive increase in the defense budget,” Sanders (I-VT), the chair of the Senate Budget Committee, said in a statement. “Now that the president has done his job, it is up to Congress to review it, pass the proposals that make sense, and improve upon it.”

Part of a sprawling budget blueprint that the White House unveiled on Monday, Biden’s military spending request for Fiscal Year 2023 represents a $31 billion increase over the current level of $782 billion, which is already unprecedented.

William Hartung, a senior research fellow at the Quincy Institute for Responsible Statecraft, noted in a statement that Biden’s proposed budget is “substantially more—adjusted for inflation—than spending at the height of the Korean or Vietnam wars, and over $100 billion more than peak spending during the Cold War.”

“The Pentagon’s FY 2023 budget will be a boon to defense contractors,” Hartung continued, “with a proposed $276 billion for weapons procurement and R&D combined, over $30 billion more than the department’s FY 2022 proposal.”

If approved by Congress, Biden’s latest budget would put the US on track to spend more than $8 trillion on its military over the next decade. In addition to providing $773 billion for the Pentagon alone, the White House’s new proposal would also provide the Department of Energy with billions in funding to “modernize” the US nuclear arsenal.

By contrast, Biden is asking Congress for just $44.9 billion in total funding to fight the climate emergency in Fiscal Year 2023.

Robert Weissman, president of the consumer advocacy group Public Citizen, said in a statement Monday that “spending $813 billion on weaponry and military contractor pay-offs and calling it ‘defense spending’ is ill-advised and enormously wasteful.”

“The greatest threats to Americans in the 21st century are not external adversaries, but rather skyrocketing wealth inequality, impending climate chaos, public health crises, and corporate greed,” said Weissman. “The broken Washington consensus that sky-high Pentagon spending will somehow keep Americans safe works to prop up the military-industrial complex while siphoning resources away from real solutions to these problems and true, urgent human needs.”

“Congress must resist the growing pressures to increase militarized spending at all costs,” he added, “and instead put that funding to work for everyday people.”

In recent years, Sanders and other progressive lawmakers have tried to pass amendments that would enact modest cuts to the Pentagon budget or merely bring it back into line with the president’s earlier requests.

But such efforts have failed to gain enough support to pass the House or Senate thanks in part to lawmakers who receive substantial campaign cash from the weapons industry, which benefits from an ever-increasing military budget.

While progressive lawmakers and advocacy groups spoke out against Biden’s proposed military budget, they applauded other elements of the White House’s request, including its push for restrictions on corporate stock buybacks and its call for a new annual tax targeting the ultra-rich.

Morris Pearl, the chair of the Patriotic Millionaires, hailed Biden’s decision to include a minimum tax on billionaires in his budget blueprint as “a monumental step towards making the richest people in the United States pay taxes every year just like Americans who work for a living.”

“Democrats in Congress should build on the White House’s endorsement and go all-in on passing the Billionaires Income Tax this year,” Pearl argued. “The American people want to tax the rich, and they’ll reward Democrats in November if they can do it.”

In his statement on Monday, Sanders added that “at a time when over 700 billionaires in America became nearly $2 trillion richer during the pandemic while tens of millions continue to struggle, we need a budget that demands that the wealthiest Americans pay their fair share of taxes and substantially improves the lives of working families with children, the elderly, the sick, and the poor.”

“I will be doing everything I can to pass a strong and robust budget reconciliation bill that works for working families, not the top 1%,” said the Vermont senator.

While you are here, we want to make sure you know how vital the support of people like you is to our work.

Uncompromising and relentlessly critical journalism that gets to the roots of the crises we are facing is more important than ever. We don’t rely on advertising to fund our work—we rely on our readers and viewers.

If you want to help us keep producing more of the radically independent news and in-depth analysis The Real News provides, please consider making a tax-deductible donation or becoming a monthly sustainer.