Facing wage theft? Here’s what you should know. 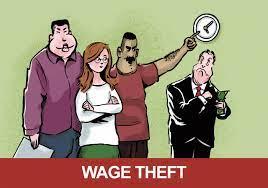 What is wage theft?

Wage theft is not a legal term. It’s a phrase used to describe minimum wage and overtime violations. When companies do not pay employees all the money they’re owed, intentionally, that is considered wage theft.

In 1938, the federal government passed the Fair Labor Standards Act, which created a national minimum wage for the first time, and required employers to pay a higher hourly rate when employees work more than 40 hours in a week.

The U.S. Department of Labor enforces the Fair Labor Standards Act, but many states (and cities) have even stronger wage theft laws. For example, New York state can impose higher penalties for companies that commit wage theft, and in Philadelphia, workers have three years to file a complaint against a company that underpaid them. The federal statute of limitations is two years in most federal cases.

One of the most common forms of wage theft happens when bosses ask staff to do tasks before or after they clock in for their shift. That could include cleaning work stations, counting cash, answering email, preparing coffee or setting up equipment.

When an employer pays someone less than the amount promised, that is wage theft. It happens often in the construction industry, labor advocates say, when contractors pay laborers a fraction of what they’re owed or won’t pay at all.

Companies must pay hourly employees 50 percent extra when they work more than 40 hours a week. Bosses often tell workers that the company doesn’t pay overtime and will continue paying the same hourly rate for longer hours. That is wage theft. Some bosses expect people to work more than 40 hours a week but will only pay them for 40 hours. That is also wage theft.

Businesses must pay their workers the federal minimum wage of $7.25 per hour or more. In many cities and states, the wage floor is higher. Many service industry workers end up making less because of how their pay is structured. Businesses can pay tipped workers as little as $2.13 an hour under federal law as long as those employees earn enough tip money to reach the minimum wage. If service is slow and a worker doesn’t receive enough tips to reach the minimum, their boss is required to pay the difference. Often, bosses don’t do that, especially in the restaurant industry.

Are all workers entitled to overtime pay and a minimum wage?

No. It depends on how much revenue a company earns, whether it does business in other states and whether employees receive an annual salary. For the most part, supervisors and high-skilled workers are not entitled to overtime pay. Companies that earn less than $500,000 in revenue each year are generally not subject to federal overtime and minimum wage rules, but if they do business with people in other states, they are subject to the law. States with their own wage theft laws may have different rules, but they cannot offer workers less protection than the Fair Labor Standards Act.

Are undocumented immigrants entitled to overtime pay and a minimum wage?

Yes. Even if someone is not authorized to work in the United States, they are protected from wage theft under the Fair Labor Standards Act. They can file a complaint with the U.S. Department of Labor to recover unpaid wages, and they can sue their employer in federal court.

I am a victim of wage theft. What do I do?

Check to see if your state has its own wage theft law that offers workers more protection than the federal Fair Labor Standards Act. Minnesota, New York, Oklahoma, Massachusetts, Virginia and California are a few that do. File a complaint with the state’s labor or employment department.

Another option is to file a complaint with the U.S. Department of Labor. However, in most cases, the complaint must be filed within two years of the wage theft incident. It normally takes the department about three months to investigate and close a case, so it might be faster to file a lawsuit in federal court.

If you’re thinking about going through the courts, look for an attorney who takes on wage and hour cases. Many won’t charge workers attorney’s fees because employers will end up paying those fees if they are at fault. You can also contact your state’s Legal Aid office to see if they will take on your case for free.