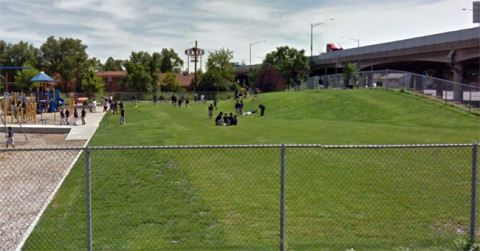 Nearly 8,000 U.S. public schools lie within 500 feet of highways, truck routes and other roads with significant traffic, according to a joint investigation by the Center for Public Integrity and Reveal from The Center for Investigative Reporting. That’s about one in every 11 public schools, serving roughly 4.4 million students and spread across every state in the nation. Thousands more private schools and Head Start centers are in the same fix.

Pollution is higher on and near busy roads, a toxic mix that can stunt lung growth, trigger asthma attacks, contribute to heart disease and raise the risk of cancer. Newer research suggests that what’s spewed out of tailpipes may also harm children’s ability to learn and could play a role in brain maladies associated with old age. Almost everyone gets a dose on a regular basis — tiny particles that batter the body’s defenses, carcinogens like benzene, chemicals called polycyclic aromatic hydrocarbons — but the people living, working or trying to learn very close to roads with heavy traffic get more. And more is worse for health, especially among children.

“The expectation of every parent is that they’re sending their child to a safe environment," said George Thurston, a population-health professor at the New York University School of Medicine. "And with this kind of pollution, they’re not.”
[…]
Darryl Alexander, the American Federation of Teachers’ health, safety and wellness director, said federal incentives would help. The EPA released a guide in 2015 for reducing road pollution at schools, but school districts are under no obligation to follow it, assuming they even know it exists. The U.S. Department of Education, noting that school buildings are funded with state and local money, declined to say whether it makes recommendations about school siting or sets any requirements.
[…]
New regulations to address traffic pollution don’t look likely, either. President Donald Trump signed an executive order requiring that the federal government get rid of two rules for every new one adopted, his EPA transition-team leader called for deep cuts at the agency and Trump told auto executives in January that environmental regulations are “out of control.” An auto industry group already has asked the administration to loosen higher fuel economy requirements — which have a side benefit of reducing air pollution — that are due to phase in through 2025.

For schools near busy roads, that increases the importance of local efforts such as better air filtration. But the National PTA couldn’t find examples of parents working on the issue.
(From Jamie Smith Hopkins, Center for Public Integrity, 2/17/17)