Amidst Pandemic, Dramatic Increases in Economic Inequality, the Rise of Racism, and Climate Disaster, the Danger of War Increases 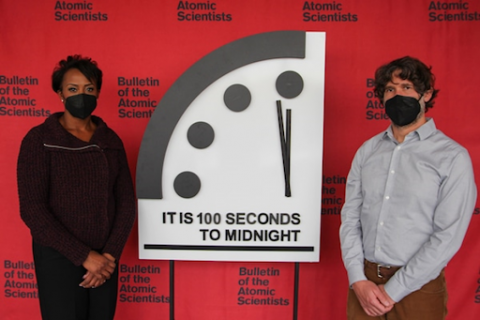 “The Clock has become a universally recognized indicator of the world’s vulnerability to catastrophe from nuclear weapons, climate change, and disruptive technologies in other domains.” This year marks the closest estimate of the possible midnight disaster in 75 years.

As the narrative unfolds concerning a possible war in Eastern Europe over Ukraine, the material below is usually left out of corporate media stories. There is reason to suspect that the Biden Administration, losing popularity by the day for its failure to get sufficient support for its domestic agenda, has chosen to reignite a new cold or hot war with Russia and China. Domestic politics, plus the fears of foreign policy elites about the relative decline in US global hegemony, may be leading the world down the path of grotesquely increased military expenditures and war. And the institutions that thrive on war or the preparation for war remain  beyond the control of elected leaders.

NATO/Ukraine/New Cold War. In 2016 leaders of the 28 NATO countries met in summit in Poland to reaffirm their commitment to the military alliance that was established in 1949 for the sole purpose of protecting the European continent from any possible Soviet military intervention. With the collapse of the former Soviet Union, rather than dissolving, NATO took on the task of policing the world for neoliberal globalization and the states “victorious” in the Cold War. NATO was the official operational arm of military operations in the former Yugoslavia in the 1990s and the military force that would destroy the Gaddafi regime in Libya.

After the collapse of the Soviet Bloc, NATO incorporated the states in Eastern Europe that had been affiliated with it. Now Poland, Hungary, and the Baltic States remain the frontline in the ongoing hostilities with Russia. They and western financiers from Ukraine, with substantial assistance from the United States, engineered the coup that ousted a corrupt but elected President in Ukraine. This set off an ongoing civil war between those in the population who wanted to continue ties to Russia and others who wanted Ukraine to join the European Union and NATO. The instability in Kiev was orchestrated by high US state department officials who advocated a New Cold War with Russia. Some US diplomats involved in the Ukraine story remain in the Biden diplomatic team.

At the NATO summit of 2016 it was agreed to establish four battalion-sized “battle groups” in Poland and the Baltic states. To use the language of the Cold War, this small force could serve as a “trip wire” that could precipitate an “incident” and a major war with Russia. NATO agreed to bolster the Ukraine military. The alliance would commit to establishing a controversial missile defense system in Eastern Europe.  And NATO countries promised to spend two percent of their budgets on the military. The continued commitment of the United States was affirmed by President Obama. After the Trump period of reduced commitment to NATO, President Biden wishes to resuscitate the alliance.

The Asian Pivot. In 2011, US spokespersons announced that the country would shift resources and attention to Asia, where US economic and security interests are deemed vital, from the Middle East. Although US/Chinese dialogue continues the United States has criticized China’s repositioning of what it regards as its possessions in the South China Sea. The United States has restated or implied its continued commitments to Taiwan, expanded military relations with Vietnam, reestablished military bases in the Philippines, and has generally avoided criticizing efforts by ruling Japanese politicians to revise their constitution to allow for a full-scale remilitarization. The United States has threatened North Korea over their military maneuvers and has bolstered the South Korean military. While Trump did reach out to North Korea, tension reduction on the peninsula was short-lived.

On the economic front the United States was instrumental in building support for the Trans-Pacific Partnership (TPP) to challenge Chinese economic hegemony in the region. While Trump rescinded the TPP approach, he launched a trade war against China and engaged in attacks on Chinese corporations operating in the West.

Both Trump and Biden spokespersons have made it clear that a New Cold War against China is ramping up. Corporations engaged in military production and research universities have used the China threat as a justification for increased military spending, research and development, cyber-security and a whole panoply of tools to fight “twenty-first century wars”.

Conclusion. Voices from the various movements for social and economic justice, preserving democratic institutions, peace, and climate change remain vital. All these movements must stand together to reverse the ticking clock that is moving inexorably toward midnight.