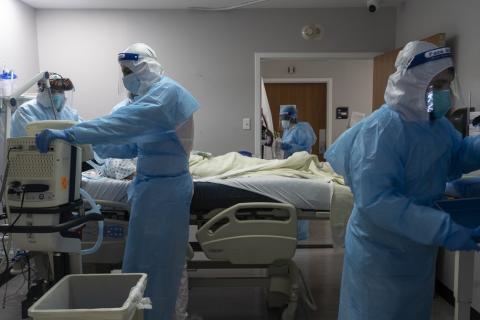 If ever there was a clear-cut demonstration of why the response to the COVID-19 pandemic has been such a catastrophic failure in so many U.S. states, the county council of Elkhart County, Indiana, just provided a good example. This week the northern Indiana county voted to reject $3 million in federal funds requested by its own health department after local residents deluged the council with conspiracy theories about COVID-19 and the federal government’s supposedly sinister role in combating and containing it.

As reported by the Associated Press:

The Elkhart County health department had sought the grant to hire staff members to provide education on chronic diseases to Black, Hispanic and Amish residents over a three-year period. The county council’s 6-0 vote on Sept. 11 against accepting the Centers for Disease Control and Prevention grant, however, had some health leaders saying the council was swayed by what they view as false information and conspiracy theories.

The money sought by the health department was intended to pay for the hiring of six badly needed new health care staff and was solicited in direct response to a health needs survey of the county’s two major hospitals, which had found the county’s Black, Hispanic, and Amish residents weren’t getting enough information relating to preventable health conditions such as diabetes, cancer, and heart disease. The survey determined that due to this lack of outreach, the county’s hospitals were filling up with patients unnecessarily, so the new staffers were sought to reach out into local communities to provide more education.

As explained by Roger Schneider, reporting for the Goshen News, in addition to paying for these new hires, the grant funding would have encompassed “mental health [treatment] with a need for a mobile response unit, co-morbidities, and treatment of chronic disease” within these communities. The grant request also had the strong backing of local mayors within the county. All in all, it seemed like a smart move to improve the health of the county’s citizens and relieve overstressed local hospitals.

But the health of their community was the last thing on the minds of several residents who showed up at the county’s council meeting on Sept. 11. Instead, the focus of these residents was on conspiracy theories, expressed in paranoiac rants about the federal government’s role in addressing the COVID-19 pandemic. The catalyst for this bizarre performance was apparently a single line in the federal grant application that stipulated local health officials agree to work with the CDC to track the number of local COVID-19 infections and assist their efforts to contact trace and quarantine infected residents.

This boilerplate contractual provision apparently smacked of sheer “government tyranny” and overreach to many of these folks, who had obviously absorbed all of their knowledge about COVID-19 from Fox News and inflammatory right-wing social media postings.

One resident, Alison Gingerich, was typical, weighing in with her deeply-felt “concerns:”

“I have to believe this grant has a lot to do with COVID,” she said. “We are tired of being educated on COVID. We have had two years of education on COVID. Two years of contract tracing with COVID. Any more education stands for threat, coercion, bullying and virtue signaling. And we are done with it. If we have $3 million to throw around let’s throw it around somewhere else. We are tired of masking our children.

“We are tired of being forced to get vaccines. And quite frankly, yesterday or the day before President Biden declared civil war on the country. And that is why we are here. We are very concerned. We are concerned our freedoms are being taken way and by perpetuating this crisis that is not a crisis, you can look at the numbers, we are not tripping over dead bodies in the streets. So, we are tired of the fear and tired of it being continued.”

As noted above, the grant itself had nothing to do with COVID-19 and nothing to do with vaccines, despite Gingerich’s rambling speech. It was intended to bolster the local health department’s dwindling resources to improve the community's overall health. According to Dr. Daniel Nafziger, a former county health official interviewed for the Goshen News article, the county’s hospitals are on the verge of being overwhelmed due to the influx of COVID-19 patients. He compared the county’s situation to that of Idaho (which recently implemented a policy of rationing care), saying that the county’s health system is close to “breaking.” But as this council meeting showed, once this right-wing, paranoid framing of everything COVID-related becomes entrenched in people’s minds it’s next to impossible to talk any sense to them.

This is particularly the case when elected community leaders opt to grandstand rather than do the harder work of explaining issues to an ignorant, uninformed public. Explaining why he would vote against the grant request, council member Adam Bujalski cited a single sentence in the grant application and flatly declared, “That one sentence is my no … I refuse to say that whatever the federal government tells me I have to do I have to do. I will never say that.” All told, over 20 people spoke out against receiving this free money from the federal government, many wearing “Vote NO” stickers and sporting T-shirts with American flags and words like “JESUS” emblazoned on them.

In the end, the vote was not close, and there was no dissent: the county voted unanimously to reject the grant request sought by its own health department.

Of course, since some of this grant money would have improved the health and lives of people of color, there was probably an element of racism underlying this strange disregard of free federal funds. Photos of the meeting show a nearly all-white audience in attendance, and the council itself is made up almost entirely of white men. The county is strongly Republican, and many of the constituents who benefited directly from the grant were ostensibly within its Democratic demographic. Had the express purpose of this grant been something other than shoring up the health of the county’s minority populations, the result may have been different.

But the county’s willingness to forego money their federal taxes had paid for in the face of these ranting, deluded constituents spouting conspiracy nonsense speaks volumes about just how dysfunctional the response to this pandemic has become, particularly in staunchly “red” areas of the country such as this. According to the AP article, Elkhart County, just east of South Bend, “saw severe COVID-19 outbreaks earlier in the year and was under a county health department-issued mask mandate for months until county commissioners refused in May to extend it under a new Republican-backed state law that required elected officials to approve such requirements.”

That means that these residents’ so-called concerns about federal overreach are entirely meritless. The CDC has no power in Elkhart county to “enforce” the kind of mandates these people were ranting about, nor do they have the ability to “force” the vaccines on anyone or “quarantine” anyone. The provision requiring that local health departments cooperate with the federal government is simply a reiteration of the CDC’s position since the pandemic started. The coordination of COVID-19 infection data with the federal government provides the means for the CDC to determine where the virus is progressing and where it is on the wane so that federal resources can be appropriately allocated.

That’s how the government goes about combating the pandemic to save as many lives as possible. At the risk of stating the obvious, all those efforts are intended to keep people like Gingerich and her ilk alive and out of the county’s few remaining ICUs. They’re not part of some government conspiracy to take away anyone’s “freedoms.” Former Goshen mayor Allan Kauffman, who was interviewed for the Associated Press article, was left shaking his head in dismay after the council’s vote rejecting the grant:

“Never have I seen something like this before, ever. And I never thought I ever would. It’s craziness,” Kauffman said. “What news do these people read, for God’s sakes? ... They want to believe these conspiracy theories.”

The brainwashing and manipulation of entire regions of this country by Fox News and right-wing media have now reached its apotheosis. Local governments are now willing to cut off their noses to spite their faces, rather than support the national effort to contain the virus’ spread. The irony is that many of the attendees at that Elkhart county council meeting will be the same ones who end up in the hospital, loudly demanding their “freedoms,” right up to the point when the ventilator tubes are pushed down their throats.