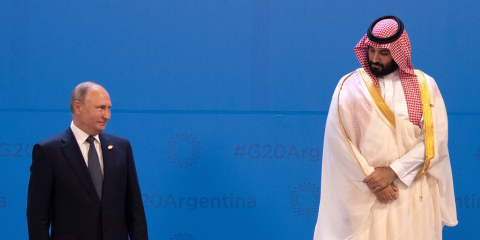 A spat between Saudi Crown Prince Mohammed bin Salman and Biden is pushing gas prices ever higher. It started under Obama.

As Russia ordered troops into Ukraine on Monday, gas prices soared to their highest levels in over seven years. While the media focuses on the conflict in Ukraine, a major cause of the gas price spike has gone overlooked: Moscow’s partnership with Saudi Arabia has grown dramatically in recent years, granting the two largest oil producers in the world the unprecedented ability to collude in oil export decisions. The desert kingdom’s relationship with the U.S. has chilled in the meantime, as demonstrated earlier this month, when President Joe Biden pleaded with the Saudis to increase oil production — a move that would not only have helped to alleviate rising inflation and gas prices, but also reduced Russia’s extravagant profits amid its aggression against Ukraine. The Saudi king declined.

The Saudi and Russian relationship has blossomed under Saudi Arabia’s de facto ruler, Crown Prince Mohammed bin Salman, whose first formal meeting with Russian President Vladimir Putin took place in the summer of 2015. MBS pursued the meeting after then-President Barack Obama declined to meet with him, The Intercept has learned from two sources with knowledge of the matter who were granted anonymity to describe sensitive discussions.

Now, as Biden refuses to meet with MBS due to his culpability in the grisly murder of journalist Jamal Khashoggi, the crown prince may again see a friend in Moscow, which is profiting handsomely off MBS’s refusal to increase oil production. Hints of MBS’s resentment over Biden’s refusal to meet with him occasionally spill out into the public, as they did last year, when the crown prince canceled a meeting with Defense Secretary Lloyd Austin on a day’s notice. He opted instead to meet with Leonid Slutsky: a top Russian lawmaker who was sanctioned by the U.S. for his role in Russia’s 2014 invasion of Crimea. (MBS canceled Austin’s visit because he was “holding out for a call from the president before responding to the administration’s entreaties,” according to senior officials cited by Council on Foreign Relations fellow Martin Indyk in Foreign Affairs magazine.)

“Putin and MBS have much in common, including murdering their critics at home and abroad, intervening in their neighbors by force and trying to get oil prices as high as possible,” Bruce Riedel, a senior fellow at the Brookings Institution and former CIA analyst with expertise in the Middle East, said in an email to The Intercept. “Putin will do MBS a great service if he invades Ukraine and sends oil prices through the roof

Back in 2015, then-deputy crown prince MBS conveyed to U.S. officials in Riyadh his impatience over his inability to secure a meeting with Obama, according to the two sources. A high-profile meeting with the U.S. president would have been a public relations coup for MBS, at the time still junior to his cousin, Crown Prince Mohammed bin Nayef, who enjoyed a warm relationship with the Obama administration. With that opportunity off the table, MBS opted to meet with Putin on the sidelines of the 19th St. Petersburg International Economic Forum in June 2015. One of the sources, a person with extensive ties to Middle East intelligence officials, said that MBS had taken the trip to spite Obama for neglecting to meet with him. (The Saudi embassy in Washington did not respond to a request for comment.)

“We view Russia as an important state in the modern world,” MBS said at the time, according to a readout of the meeting released by the Kremlin. “Therefore, we will work to develop bilateral relations … in all areas.”

The next month, in July 2015, then-CIA Director John Brennan rebuked MBS for his recent contacts with Putin, according to a lawsuit filed by former top Saudi intelligence official Saad Aljabri. MBS went as far as encouraging Putin to intervene in the Syrian civil war, the lawsuit alleges. In the bloody conflict that ensued, Russian forces killed thousands of Syrian civilians.

In September 2016, Saudi Arabia signed an agreement with Russia to cooperate in global oil markets, hinting that it could limit oil production at some point in the future. This was a major economic victory for Russia, which had never been admitted into the Organization of the Petroleum Exporting Countries and would now be a member of “OPEC Plus”— the plus referring to Russia — enabling Putin’s government to coordinate oil production decisions with other member nations.

By 2018, Saudi Arabia’s forewarning about limiting oil production had become a reality. This vexed then-President Donald Trump, who was facing midterm elections and high oil prices — much like Biden is today. But unlike Biden, Trump enjoyed unusually warm relations with the Saudis, having upended long-standing U.S. presidential tradition by selecting Riyadh for his first official foreign visit, lavished praise on the young crown prince, authorized the largest arms sale to Saudi Arabia in U.S. history, vetoed legislation blocking arms sales, and defended MBS against accusations — including from Trump’s own CIA director — of involvement in the Khashoggi murder.

MBS complied with Trump’s request, raising oil production steeply, which caused prices to collapse to below $60 a barrel. (Today, oil is at almost $100 a barrel.) Then, during the 2020 election season, amid the pandemic-driven slowdown in demand, Trump requested that the Saudis decrease production to protect the struggling U.S. shale industry. Once again, MBS complied.

By contrast, Biden’s repeated requests for Saudi Arabia to increase oil production have gone unanswered. Earlier this month, Biden discussed “ensuring the stability of global energy supplies” in a call with Saudi King Salman, MBS’s father, according to a readout of the conversation released by the White House. One key detail not included in the White House readout, but mentioned in the Saudi version, was that King Salman “highlight[ed] the role of the historic OPEC Plus agreement … and the importance of maintaining the agreement,” referring to the pact with Russia to coordinate oil production decisions.

Last week, the White House sent its coordinator for Middle East and North Africa, Brett McGurk, to Riyadh to “discuss a collaborative approach to managing potential market pressures stemming from a possible Russian invasion of Ukraine,” according to a travel note released by the National Security Council. The Saudi government did not release an equivalent statement about McGurk’s visit. “Likely [the visit] did not register as a matter of importance to the government, which is telling in and of itself,” said Dr. Ellen Wald, a nonresident senior fellow at the Atlantic Council.

Opponents of accountability measures for Saudi Arabia often claim that they could drive the kingdom into the arms of U.S. competitors. Back when Congress was debating sanctioning Saudi Arabia, a former aide to MBS, Turki Aldakhil, issued a not-so-subtle threat in the Saudi-owned media outlet Al Arabiya. “Imposing any type of sanctions on Saudi Arabia by the West will cause the kingdom to resort to other options,” Aldakhil warned. “Russia and China are ready to fulfill Riyadh’s military needs … repercussions of these sanctions will include a Russian military base in Tabuk, northwest of Saudi Arabia.”

But Saudi Arabia is pretty clearly already in Russia’s corner economically; and any attempt by Riyadh to welcome Russia’s military presence would be extremely complex and costly for the Saudis, experts say.

“The practical reality of Saudi Arabia transforming its military from decades of American military-made equipment and technology would be enormously expensive, difficult and time consuming,” Douglas London, a retired CIA senior operations officer and author of “The Recruiter: Spying and the Lost Art of American Intelligence,” told The Intercept in an email. London, who served extensively in the Middle East during his 34 years in the CIA, said that mixing Russian and Chinese military technology with U.S. equipment would also cause significant interoperability issues. “The kingdom’s flirtation with America’s rivals is largely to feign greater independence in security issues and send a message.”

Saudi Arabia lacks an advanced military of its own, depending heavily on the U.S. not just for military equipment but also for its maintenance. While this affords Washington plenty of leverage to treat the desert kingdom as a “pariah,” as candidate Biden promised to do, his administration has done little to hold Saudi Arabia accountable for a range of human rights abuses, from the Khashoggi killing to the starvation and bombing of countless civilians in Yemen.

Today, for example, the Biden administration announced new sanctions against Houthi financiers, a move that human rights advocates have warned would exacerbate the humanitarian crisis by hampering civilian imports. Sarah Leah Whitson, executive director of Democracy for the Arab World Now, told The Intercept, “That the Biden administration has reimposed sanctions that a mere few months ago it condemned as inhumane and ineffective is all you need to know about its commitment to human rights.”