Convoy Movement Isn’t a Struggle Over Freedom, It’s an Attempt to Kill Democracy 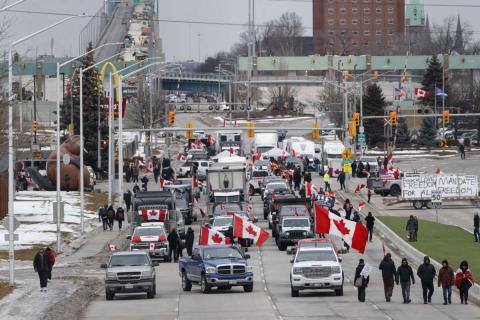 The “Freedom Convoy” movement, consisting of hundreds of trucks, has ground to a halt the busiest border crossing between Canada and the United States and occupied Ottawa, Canada’s capital, effectively blockading the city and disrupting daily life for most residents in the core of the city. The convoy participants reject all vaccine requirements and mandates and support a decidedly anti-government discourse reminiscent of far-right ideology in the United States.

The truckers are endorsed largely by leading U.S. Republicans such as Donald Trump, Ted Cruz and Marjorie Taylor Greene, along with some Canadian conservative politicians. Support has also come from powerful anti-democratic social media figures such as Tucker Carlson, Jordan Peterson and Elon Musk, and an array of white supremacist groups. Some of the more powerful right-wing groups in Canada include Action4Canada, which makes the false and conspiracy-riddled claim that the COVID-19 pandemic “was carried out, at least in part, by Bill Gates and a ‘New World (Economic) Order’ to facilitate the injection of 5G-enabled microchips into the population.” With the help of the social media, support for the Freedom Convoy protests snowballed globally with upcoming convoys being planned for the United States, France and all 27 European countries.

The Freedom Convoy protests is the brainchild of James Bauder, who heads the Canada Unity movement, which launched the protests. Bauder believes in multiple baseless conspiracy theories and “has endorsed the QAnon movement and called Covid-19 ‘the biggest political scam in history.’” Bauder is no friend of organized labor and, as Jacobin has noted, two years ago he participated in another convoy called United We Roll that “planned an anti-union protest where convoy members threatened to dismantle the picket line and run over workers.”

Other leaders in the movement include some hard right extremists such as Patrick King who, according to The Conversation, once “stated that he believes the vaccine was created to ‘depopulate’ the white race.” Another convoy leader named B.J. Dichter has a reputation for spreading Islamophobic sentiments.

The Canadian Anti-Hate Network, a nonprofit group, has reported that “The so-called ‘Freedom Convoy’ was organized by known far-right figures who have espoused Islamophobic, anti-Semitic and other hateful views.”

The Ottawa protests have made clear that extreme elements supporting fascism and white nationalism are attracted to the movement, and visible in the appearance of neo-Nazi and Confederate flags and an abundance of QAnon logos emblazoned on trucks, signs and stickers. Moreover, some sources are suggesting that a significant amount of funding, over $8 million as of February 7, may have come from right-wing sources in the United States. Some of the highest individual donations have come from American billionaires. Funding from the states has so alarmed members of the New Democratic Party that they have called it “an attack on Canada’s democracy” and have asked the U.S. ambassador “to testify before the House of Commons foreign affairs committee.

Jagmeet Singh, the leader of Canada’s New Democratic Party, has stated that this is more than a protest movement. On the contrary, he argues that “the convoy’s stated intent is to “overthrow the government.” The convoy association “with hate groups … expressing racist and anti-immigrant sentiments … could explain why the Freedom Convoy is strangely silent on labor issues facing immigrant truckers who now make up over one-third of truckers in Canada,” writes Emily Leedham in Jacobin. She further notes “that many of the concerns of the protesters have little to do with workers’ rights or labor issues within Canada’s trucking industry. In fact, Convoy organizers have previously harassed workers on the picket line and ignored calls for support from racialized truckers fighting against wage theft.”

The Ottawa truckers are motivating right-wing convoy movements across the globe.

Freedom, once again, has been hijacked in the interest of a counter-revolution whose purpose is to destroy the authority of the government to protect the common good, limit the influence of the financial and corporate elite, and protect civic structures crucial to a democracy. The Ottawa truckers are motivating right-wing convoy movements across the globe and their growing influence makes clear that they are winning the global information war.

Indeed, it is not just convoy movements that are increasingly subverting the concept of freedom in the service of right-wing extremism across the globe. From the United States and Brazil to Turkey and Hungary, anti-democratic actors are reducing freedom to the realm of unchecked self-interest, a rejection of the welfare state and a flight from social responsibility. In the process, they are waging a war on democracy.

Removed from the discourse of the common good, equality and social rights, individual freedom now aligns with the mob — positioning itself with those willing in the age of the pandemic to sacrifice other people’s lives in the name of a bogus appeal to personal rights.

While former President Donald Trump has been the most prominent figure in maligning individual freedom as a vehicle for embracing a fascist politics and the discourse of hate and violence, his endorsement of authoritarianism in the name of freedom has legitimated anti-democratic acts across the globe. Not only has this movement become a flashpoint for global far-right protests, it has also developed a massive social media presence in which, as Politico has reported, the convoy movement has promoted the idea that “efforts to keep people safe from the coronavirus are, instead, anti-democratic restrictions on individual freedoms.”

Elisabeth Anker argues that the right wing in the United States is increasingly using the language of “ugly freedoms” to promote an “anti-democratic politics [that] threatens to overtake freedom’s meaning entirely, harnessing freedom solely to projects of exclusion, privilege and harm.” She writes:

‘Ugly freedoms’ [are] used to block the teaching of certain ideas, diminish employees’ ability to have power in the workplace and undermine public health. These are not merely misunderstood freedoms, or even just a cynical use of the language of freedom to frame bigoted policies. They manifest, instead, a particular interpretation of freedom that is not expansive, but exclusionary and coercive.

This notion of “ugly freedom” is certainly applicable to the convoy movement. Lost in its neoliberal view of freedom is any notion of an “inclusive freedom” that contests authoritarian and anti-democratic modes of suppression such as the concentration of wealth and power in the hands of a financial elite, the rise of the punishing state, mass poverty, the rise of war culture, ecological devastation, and the criminalization of social problems such as homelessness. Convoy protesters are silent regarding a notion of inclusive freedom — one that would argue for universal health care, expanding workers’ unions, introducing regulations that ensure worker safety and paid sick days, and the need for social and wage benefits for unemployed workers. Under this form of capitalism, freedom is hollowed out, removed from any sense of social solidarity, forcing individuals to bear full responsibility for the problems they confront even though they are not of their own making. As Zygmunt Bauman rightly observes, existential insecurity is intensified as “individuals are now eft to find and practice individual solutions to socially produced troubles … while being equipped with tools and resources that are blatantly inadequate to the task.”

The dangers of unchecked individualism cannot be separated from struggles over freedom, especially as it becomes a rationale for undermining human dependency, the common good and support for mutual solidarity. Freedom when wedded to neoliberal notions of individualism undermines human bonds and makes solidarity difficult to both recognize and practice. This danger has become clear as the appeal to freedom in the convoy movement is used as a call to resistance to COVID-19 vaccination efforts and mask mandates — a tactic which is code for an allegiance to the political right. Vaccine scientist Peter Hotez adds to this position, arguing that for the most part, the anti-vax, freedom-at-all-cost movement engages in “anti-science aggression” and “is a component of authoritarian rule [cultivated by] their own cadre of pseudo intellectuals.” Hotez makes clear that the appeal to freedom to buttress an anti-vax, anti-science movement has fueled its degeneration into a “killing force.” One can clearly apply this analysis to the convoy movement.

The convoy movement is not a struggle over freedom, it is an attempt to destroy democracy in the name of freedom.

What Hotez and other critics of the anti-vax movement, including the convoy protests, miss is how neoliberalism remakes the social into the biographical, further convincing individuals that they have no obligation to contribute to the health, safety and democratic institutions that shape the wider community. Those who support the convoy movement have lost sight of the relationship between liberty and the greater good. The convoy movement is not a struggle over freedom, it is an attempt to destroy democracy in the name of freedom.

Henry A. Giroux currently holds the McMaster University Chair for Scholarship in the Public Interest in the English and Cultural Studies Department and is the Paulo Freire Distinguished Scholar in Critical Pedagogy. His most recent books include: American Nightmare: Facing the Challenge of Fascism (City Lights, 2018); The Terror of the Unforeseen (Los Angeles Review of books, 2019), On Critical Pedagogy, 2nd edition (Bloomsbury, 2020); Race, Politics, and Pandemic Pedagogy: Education in a Time of Crisis (Bloomsbury 2021); and Pedagogy of Resistance: Against Manufactured Ignorance (Bloomsbury 2022). Giroux is also a member of Truthout’s Board of Directors.