The U.S. Hypocrisy on Ukraine 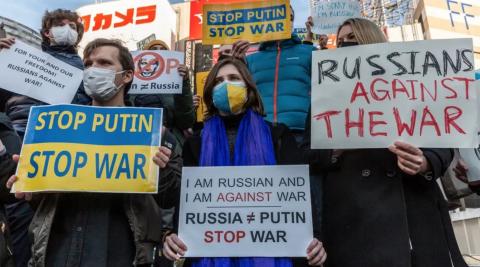 We should condemn the Russian invasion, but also recognize that the United States has been violating other nations’ sovereignty for years.

Though U.S. and NATO policy in recent years has contributed to the current tragedy unfolding in Ukraine, responsibility rests unequivocally with the Kremlin. It is an illegal war of aggression which has quite deservedly resulted in worldwide condemnation.

Media coverage has been sympathetic to the civilian victims of the invasion and the Ukrainian resistance. Again, while it raises questions about why there hasn’t been a comparable response when the victims weren’t white, Christian Europeans, or when the aggressor was the United States or a U.S. ally, it is refreshing to see this acknowledgement of the horrors of war.

There’s no excusing the invasion, but the double standards and hypocrisy coming out of Washington, D.C., are quite striking.

For example, President Joe Biden has correctly asserted that “nations have a right to sovereignty and territorial integrity.” The United States, however, has been the only government in the world to formally recognize Israel’s illegal annexation of Syria’s Golan Heights and Morocco’s annexation of the entire nation of Western Sahara, both seized by force in defiance of the United Nations.

If Biden really believed that countries have a right self-determination he would not refuse to recognize this right for Western Sahara, as the International Court of Justice and virtually every country on Earth has called for, nor would he refuse to support Palestinian self-determination outside of the parameters agreed to by their Israeli occupiers, the current prime minister of which has categorially ruled out Palestinian statehood.

In addition, Biden’s claim that the United States “always stands up to bullies” would be news to the Yemenis, Lebanese, Palestinians, and others who have been subjected to massive military attacks by U.S.-armed allies. His insistence that “we stand for freedom” is contradicted by his administration’s support for brutal dictatorships in Egypt, Saudi Arabia, Bahrain, the United Arab Emirates, and elsewhere. Criticism of Russia’s veto of the U.N. Security Council resolution condemning the invasion rings hollow in light of successive U.S. vetoes of resolutions challenging the U.S. invasions of Grenada and Panama, U.S. attacks on Nicaragua, and Israel’s invasions of Lebanon.

And, of course, Biden’s insistence that countries must not invade other nations on false pretenses is incredibly hypocritical considering his strident support as a Senator for the U.S. invasion of Iraq on the deceptive grounds that Saddam Hussein had somehow amassed vast arsenal of chemical and biological weapons, a nuclear program, and sophisticated delivery systems.

Although Biden is certainly correct to challenge Russian president Vladimir Putin’s claims that Ukraine constituted enough of a threat to Russian national security that his government had to invade, Biden’s past puts him in a poor position to lead the international response to Russian aggression.

The history of U.S. militarism, imperialism, and false narratives has led some on the antiwar left to rationalize Russian aggression and exaggerate Western responsibility. A number of forums and rallies in the weeks preceding the invasion calling for a no war in Ukraine focused on the nonexistent threat of U.S. military intervention while ignoring the very real and growing threat of a Russian invasion. Subsequently, some have tried to blame Washington for Moscow’s actions.

It is certainly true that the decision by the United States to break what appears to have been a promise to the Kremlin that NATO would not expand eastward contributed to Putin’s paranoid nationalism. Incorporating former Warsaw Pact countries and three former Soviet republics into the Western alliance could be seen as unnecessarily provocative, particularly in light of repeated invasions of Russia from Western Europe through Ukraine in 1812, 1914, 1919, and 1941.

Even many critics of the United States’ massive arms transfers to countries around the world argue that a democratic nation faced with a full-scale invasion justifies military aid.

A strong argument could also be made that the crisis could have been avoided if NATO had been willing to rule out membership for Ukraine, granting the nation a neutral status similar to Finland and Austria during the Cold War. At the same time, Putin’s rewriting of history and his insistence that Ukraine is inherently part of Russia, along with his decision to launch a full-scale invasion, is indicative that he would have done so regardless.

Putin appears to have at least some U.S. supporters. Not only are many in the Trump wing of the Republican Party embracing his autocratic reactionary nationalism, but there are also people on the left who have embraced him simply because he opposes the United States.

Despite claims to the contrary, the United States was not responsible for the popular 2014 uprising that ousted the Ukraine’s democratically elected but increasingly autocratic and notoriously corrupt President Viktor Yanukovych. The limited funding of some opposition groups was no more responsible for the pro-Russian leader’s ouster than Soviet support for armed leftist groups was responsible for socialist revolutions during the Cold War. It’s as wrong to deny agency to Ukrainians as it was to deny it to Salvadorans.

And despite overreach by some U.S. officials in trying to influence the makeup of the provisional government, subsequent elections have brought to power popular representative governments. The current president, Volodymyr Zelenskyy, who won by a landslide, is Jewish and an ethnic Russian, making claims that the Ukrainian government is controlled by Nazis committing genocide against Russian-speakers particularly absurd.

As with the U.S. invasion of Iraq, Russia’s invasion of Ukraine is a major setback to nonproliferation efforts. In the 1994 Budapest agreement, Ukraine agreed to give up its vast nuclear arsenal inherited from the Soviet Union in return for guarantees by Russia and others of its territorial integrity.

So how should the United States respond? Even many critics of the United States’ massive arms transfers to countries around the world argue that a democratic nation faced with a full-scale invasion justifies military aid. At this time, however, it is unclear whether it would be enough to defeat the Russian invasion or just cause more bloodshed. Perhaps more effective would be massive nonviolent civil resistance, which would make an occupied Ukraine ungovernable like the kind that freed the Baltic Republics from Russian occupation in the early 1990s.

Meanwhile, in Russia, antiwar protests have broken out and leading scientists, writers, intellectuals, sports figures, and others are openly challenging the Kremlin. More than 1,700 protesters were arrested in just the incursion’s first few days.

In contrast to the Soviet era, Russia is far more dependent on the increasingly globalized economy, so the economic sanctions are already hurting, particularly the oligarchs on whose support Putin depends. And the bravery of Ukrainians in both the armed and unarmed resistance has slowed and, in some cases, even reversed the Russian advance.

It is unclear what the right course is for the United States to take, and Washington’s hypocrisy and double standards has weakened U.S. leadership on this issue. However, unlike many international crises, the world appears united in opposing Russian aggression and it is likely Putin will ultimately be defeated.

The only question is, how long it will take, and how many people will die in the meantime?

Stephen Zunes is a professor of politics at the University of San Francisco and co-author of Western Sahara: War, Nationalism, and Conflict Irresolution.