The best-case scenario in Ukraine 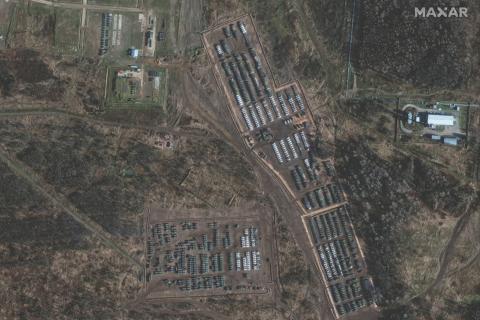 Rather than risking war, the US would be wise to accept neutrality for Russia’s western neighbor.
Soldiers swarmed over the tarmac of an airport in Ukraine for several days in mid-November. They were unloading 80 tons of American weaponry. As they worked, Ukraine’s defense minister was being welcomed with an “enhanced honor cordon” at the Pentagon. Secretary of Defense Lloyd Austin pledged that the United States would give Ukraine “unwavering support” in its suddenly escalating confrontation with Russia.
In recent weeks, tens of thousands of Russian troops have massed near the Russia-Ukraine border. Ukrainian troops are massed on their side. Some in Washington fear that war is approaching. Pledges like Secretary Austin’s suggest that the United States could be drawn into it. That would be disastrous.
Ukraine has a 1,300-mile border with Russia, so Russia sees the possibility of it allying with the United States much as we would see a foreign-allied Mexico. It is half a world away from American shores and has little strategic value for us other than as a tool against Russia. Our arms shipments and pledges of unlimited support send a dangerously misleading message to our Ukrainian friends. Despite all our bluster, the United States would be highly unlikely to send troops to support Ukraine in a war with Russia. Instead, we should promote a settlement that would turn Ukraine into a Slavic version of Finland or Austria: open to all, West-oriented if its people so desire, but militarily neutral.
Today’s Ukraine emerged 30 years ago from the wreckage of the Soviet Union. Its current leaders are strongly anti-Russian and would like to bring Ukraine into the US-dominated NATO military alliance. Russia says it will do whatever is necessary to prevent that. Since 2014, Russian troops have occupied two pieces of Ukraine that are inhabited mainly by Russian speakers, including the strategic Crimean Peninsula. Ukraine threatens to seize them back. Russia may try to take more. Rather than seek to calm this dispute, the United States is pouring gasoline on the smoldering embers.
Secretary of State Antony Blinken recently called the US commitment to Ukraine “ironclad.” Note to President Volodymyr Zelensky: Don’t take him literally. Going to war on the presumption that the United States will send troops or gunships to fight Russia would be a grave miscalculation. It’s good to reassure your friends, but if war breaks out, this promise is likely to prove falser than vows made in wine.
Russia has strong reasons for restraint. If it invaded Ukraine, it would certainly suffer heavy sanctions from the European Union. In some areas, its ground forces would encounter fierce resistance. Even if successful, Russia would have a hard time controlling a country that is twice the size of Britain.
For the United States, the list of dangers is even longer. Countering a Russian force on the battlefield in Ukraine would require large deployments, produce casualties, and quite possibly result in defeat. War would create economic upheaval across Europe and distract Congress from President Biden’s cherished domestic agenda. The big winner would likely be the Chinese, since isolation from the West would all but force Russia into their arms. China could even decide that with the United States at war with Russia, the time would be right to strike against Taiwan.
Despite this shared interest in peace, both sides are engaged in high-stakes geopolitical gambling. Russia holds better cards. It cares far more about Ukraine than we do, and it is willing to sacrifice far more to secure its position there. “If some kind of strike systems appear on the territory of Ukraine, the flight time to Moscow will be 7-10 minutes, and five minutes in the case of a hypersonic weapon being deployed. Just imagine,” Russian President Vladimir Putin said Tuesday. “What are we to do in such a scenario? We will have to then create something similar in relation to those who threaten us in
Ukraine is hardly the first European country to find itself torn between East and West. During World War II, the Soviet Union failed to overrun Finland and settled for an accord guaranteeing Finnish neutrality. Over the decades that followed, Finland studiously avoided provoking Moscow. It did not participate in US-sponsored projects like the Marshall Plan and did not join NATO. In exchange for this deference, the Soviets generally respected Finland’s independence and democracy.
A similar arrangement shaped Austria. American and Soviet troops that occupied the country after World War II withdrew in 1955. As part of the deal, which took years to negotiate, a declaration of “permanent neutrality” was added to the Austrian constitution. “In all future times,” it says, “Austria will not join any military alliances and will not permit the establishment of any foreign military bases on her territory.”
President Eisenhower didn’t like this deal. He wanted Austria to be on our side, not neutral. Today many in Washington feel the same way about Ukraine. They see it as a valuable chess piece in our campaign against Russia. Allowing it to be neutralized would end this contest without victory. In the United States, where the “will to win” is deeply ingrained in both security policy and collective consciousness, that feels close to defeat.
In fact, it would be the opposite.
The greatest defeat the United States could suffer in Ukraine is to be drawn into war there. An accord that Russia and Ukraine signed in 2015 provides a basis for peace, but it is languishing. Now, as war drums beat, is the time to revive it. Eisenhower swallowed hard and accepted permanent neutrality for Austria. Biden should follow his example and seek the same for Ukraine.
By Stephen Kinzer December 2, 2021, Boston Globe
Stephen Kinzer is a senior fellow at the Watson Institute for International and Public Affairs at Brown University