Lock him up! Why is repeat offender Donald Trump still a free man? 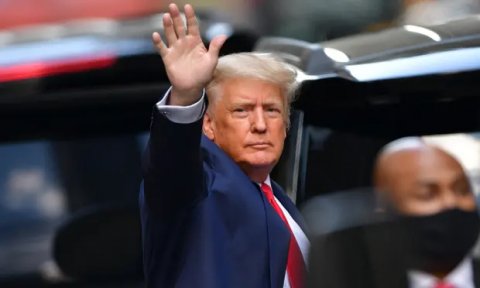 The ex-president is accused of abuse of power, fraud, tax evasion and more but he has not been charged with anything

A sudden fall from power always comes hard. King Alfred was reduced to skulking in a Somerset bog. A distraught Napoleon talked to coffee bushes on St Helena. Emperor Haile Selassie of Ethiopia hung around the haberdashery department of Jolly’s in Bath. Uganda’s Idi Amin plotted bloody revenge from a Novotel in Jeddah. Only Alfred the Great made a successful comeback.

All of which brings us to Donald Trump, currently in exile at his luxury club in Bedminster, New Jersey. Whingeing amid the manicured greens and bunkers of his exclusive golf course, the defeated president recalls an ageing Bonnie Prince Charlie – a sort of “king over the water” with water features. Like deposed leaders throughout history, he obsesses about a return to power.

Yet as Senate minority leader Mitch McConnell moves to kill off a 9/11-style national commission to investigate the 6 January Capitol Hill insurrection, the pressing question is not whether Trump can maintain cult-like sway over Republicans, or even whether he will run again in 2024. The question that should most concern Americans who care about democracy is: why isn’t Trump in jail?

The fact he is not, and has not been charged with anything, is a genuine puzzle – some might say a scandal, even a conspiracy. Trump’s actual and potential criminal rap sheet long predates the Capitol siege. It includes alleged abuses of power, obstruction of justice, fraud, tax evasion, Russian money-laundering, election tampering, conflicts of interest, hush-money bribes, assassination – and a lot of lies.

Let’s take these allegations one at a time. District of Columbia investigators say they have charged 410 people over the Capitol breach. Some could be tried for plotting to overthrow the US government – a crime punishable by up to 20 years in prison – or even for murder, given that five people died.

Yet Trump, who urged supporters at a Washington rally that day to “fight like hell” to stop Congress certifying his election loss, is not among them. He has not even been questioned over his indisputably pivotal role.

For sure, Trump was impeached – but he declined to appear before Congress, and Republican toadies made a mockery of the process, voting to acquit him of inciting insurrection. In March, DC attorney Michael Sherwin said federal investigations involving Trump are still under way. “Maybe the president is culpable,” he mused. But updates about this key aspect of the affair are unaccountably lacking.

Yet these long-running investigations lack tangible results. Nor do they appear to be examining potentially more politically illuminating allegations such as Trump’s dealings with Vladimir Putin and Russia’s oligarchs, money-laundering via the New York property market, and the past role of disgraced Deutsche Bank. While claiming it’s all a “witch-hunt”, Trump may be happy for these limited inquiries to drag on indefinitely.

Why, meanwhile, has Trump not already been arraigned on charges of obstruction of justice and abuse of power? Exactly two years ago, special counsel Robert Mueller cited 10 instances of the then president allegedly obstructing investigations into collusion between the Trump 2016 campaign and Russia. They included his firing of the FBI director, James Comey, and an attempt to sack Mueller himself.

Mueller plainly indicated there was a case to answer, but said he was unable to bring indictments. “A president cannot be charged with a federal crime while he is in office,” he said. Even if that is legally correct, Trump is no longer in office. Merrick Garland, William Barr’s thankfully less Uriah Heep-ish successor as attorney-general, should be all over this. Why isn’t he?

Trump’s well-attested attempts to induce Georgia state officials to manipulate November’s election count in his favour were a crime, Fulton County prosecutors suggest. If so, why the delay? Charge him! Add to the rap sheet allegations of the ex-president corruptly channelling US taxpayer and foreign funds into his hotel and resort businesses.

Trump, who promised to 'drain the swamp', waddled knee-deep in sleaze. So charge him!


“Special interest groups likely spent more than $13 million at Trump properties” in order to gain access and influence, Citizens for Responsibility and Ethics in Washington, an independent watchdog, reports. This typified an administration “marked by self-interest, profiteering at the highest levels, and more than 3,700 conflicts of interest”.

In short, Trump, who promised to “drain the swamp”, waddled knee-deep in sleaze. So investigate and charge him!

Trump has much to answer for internationally, too. The UN says the assassination he ordered last year, without just cause, of an Iranian general, Qassem Suleimani, was an unlawful act – possibly a war crime. And if all that is not enough, then consider – from a moral if not a legal standpoint – the thousands of avoidable Covid-19 deaths attributable to Trump’s denialism, stupidity and reckless incompetence.

It’s truly strange that in a land of laws, Trump still walks free, strutting around his fancy-pants golf course, holding $250,000 a head fundraisers, evading justice, encouraging sedition, and daily blogging divisive bile about a stolen election. The Big Kahuna peddles the Big Lie. What other self-respecting country would allow it?

The dismaying answer may be that to lock him up – the fate he wished on Hillary Clinton – would be to risk another insurrection. That’s the last thing Joe Biden and America’s wobbly democracy needs. But letting him get away with it harms democracy, too. In office, Trump ruled by lawlessness and fear. In exile, fear keeps him beyond the reach of the law.