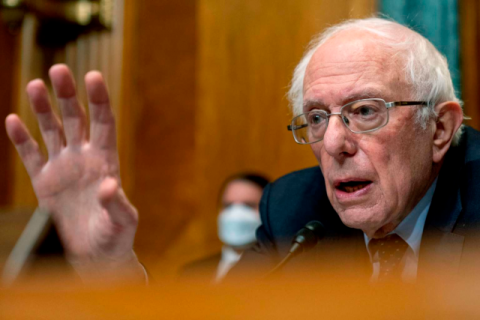 After his defeat at the hands of Hillary Clinton and the Democratic National Committee (DNC) in the 2016 presidential primaries, Vermont Sen. Bernie Sanders went back to work. Sanders’s supporters were in agony that November as they watched Clinton lose to the worst candidate ever put forth by the Republican Party: “Bernie would have won!” The rest is rancid history.

When Sanders declared his intention to run again in 2020, hope blossomed anew. His supporters, and more than a few of the Smart Folks in professional politics, believed the country was ready for Sanders’s progressive policy ideas after years of enduring the Trump firestorm. Sanders built a lead in the early primaries against a large and varied pack of Democratic candidates, and for progressives, the chance of a lifetime seemed finally at hand.

It was not to be. A variety of factors — low turnout by young voters who were the backbone of his campaign plan, poor showings in more conservative Southern state primaries, the rise of COVID fears which culminated in the crash stop the nation endured in March, and the thunderclap endorsement of Joe Biden by Rep. Jim Clyburn of South Carolina — ripped the needle off the record for the Sanders campaign. This time, however, the ultimate outcome was far different.

Biden took control of the election rather in spite of himself, won the nomination without the intra-party rancor that came in the aftermath of 2016, and soundly defeated Trump in November. After a pair of unlikely victories in two Georgia Senate races, long weeks of Trumpian tantrums, a slew of right-wing street riots, an attempted coup at the Capitol and the second impeachment of Donald Trump, President Biden found himself with a slim House majority and an even slimmer Senate majority. For the first time in 12 years, Mitch McConnell was not the most powerful person in Washington.

Enter the democratic socialist from Vermont. Those slim majorities gave Democrats control over every congressional committee, and Sanders was given the chairmanship of the Senate Budget Committee. Putting him in that seat may well measure up to be the most impactful decision any Democrat has made in decades.

The Budget Committee’s main purpose “is to develop a concurrent resolution on the budget to serve as the framework for congressional action on spending, revenue, and debt-limit legislation.” It is separate from the Appropriations Committee, which decides where specific revenues should be allocated within that larger budgetary framework. “The Senate Budget Committee is also responsible for the enforcement of this concurrent resolution and associated budget laws,” according to the committee’s information page.

If that all sounds like pretty dusty stuff, it isn’t. Like the Appropriations Committee, the Budget Committee is where the money’s at, and in Washington, D.C., a great deal of congressional power flows through the choices on who and what gets federal revenues.

One of the great powers of the Budget Committee is the use of reconciliation, which, according to the committee, is “a piece of legislation that is written to bring about specific identified fiscal goals. A reconciliation bill, if passed and signed by the president, carries with it the full force of law.” A bill drafted under the rules of reconciliation is immune to the filibuster, and requires only a straight-up majority to pass.

The power of reconciliation is in the hands of Bernie Sanders now, and he has made good use of it. With the Senate tied at 50-50 and Vice President Kamala Harris standing as the tie-breaking vote, passage of President Biden’s most important priorities would have been all but impossible. Thanks to Sanders and his reconciliation tool, Biden’s $1.9 trillion COVID relief bill is days away from becoming law.

The relief bill is only the beginning for Sanders. “Senate Democrats are readying to pass President Biden’s infrastructure package through the budget reconciliation process, a recognition they’re unlikely to get much Republican support for a potential $2 trillion package,” reports Axios. “Sen. Bernie Sanders told Axios on Tuesday he’s consulted with the White House about how to prepare for the next round of spending, and he’s ready to do it immediately via reconciliation — a process he controls as chair of the Senate Budget Committee. ‘If I have anything to say about it, it will, and I think the president wants it to happen,’ Sanders said during an interview in the Capitol.”

There have been some notable and potentially disruptive bumps in the road due to the use of reconciliation. A $15 minimum wage hike included in the relief bill has been stripped after Senate Parliamentarian Elizabeth MacDonough ruled it unworkable under the reconciliation rules. A hue and cry was raised in the ranks of progressive Democrats: an unelected official should not have the power to derail so vital a policy. Calls for the Senate to ignore or even fire MacDonough were made, and one of those voices belonged to Sanders.

“My personal view is that the idea that we have a Senate staffer, a high-ranking staffer, deciding whether 30 million Americans get a pay raise or not is nonsensical,” Sanders told reporters on Monday. “We have got to make that decision, not a staffer who’s unelected, so my own view is that we should ignore the rulings, the decision of the parliamentarian.”

After decades shouting truth in the wilderness of U.S. politics, Sanders is making the most of his chance.

Back in 2001, when then-Senate Parliamentarian Robert Dove ruled against two key provisions in George W. Bush’s tax plan, the Republicans fired him and passed the bill. It was a bad look then, and 20 years later, the Senate majority assessed it would be a bad look again. In this instance, Senate Democratic leadership decided “Let’s be like the Republicans!” wasn’t a wise choice so early in the legislative season, especially with the minority piteously puling over the alleged absence of “unity.”

Sanders’s impact as Budget Committee chairman reached into the Biden administration itself this week, as the nomination of Neera Tanden to head the Office of Management and Budget (OMB) fell to dust. Tanden, a former Hillary Clinton campaign official and vociferous Twitter warrior, found her nomination facing bipartisan push-back captained by Sanders, whose committee oversees the OMB.

As much as Tanden’s notoriously caustic Twitter treatment of friends and enemies alike put her nomination in peril, it was her pro-corporate work with the Center for American Progress (CAP) that ultimately did her nomination in. CAP calls itself a progressive organization, but enjoys vast funding from a variety of Wall Street entities. During her time there, Tanden was responsible for maintaining and augmenting those financial relationships, a fact that has rubbed actual progressive organizations raw for years.

In April 2019, Sanders dispatched a letter to CAP underscoring his concerns about Tanden’s tactics and behavior. “Neera Tanden repeatedly calls for unity while simultaneously maligning my staff and supporters and belittling progressive ideas,” he wrote. “I worry that the corporate money CAP is receiving is inordinately and inappropriately influencing the role it is playing in the progressive movement.”

Two years later and with real power in hand, Sanders was able to derail the nomination of someone who had plagued him and his campaigns for five years. It could be said that Neera Tanden is the last casualty of the Hillary-Bernie wars, and when all was said and done, Bernie won.

If the failure of Tanden’s nomination has angered the Biden administration, they are at pains not to show it. “The state of the Bernie-Biden relationship remains strong, even under stressful circumstances,” reports Politico. “With Democrats navigating battles over labor rights and wage policy, the two have back-channeled, applauded each other, and crafted carefully worded statements designed to project peace and the aura of collaboration. It is, in part, a recognition that each side needs the other in order to be successful. It’s also driven by a desire to avoid the problems of the past.”

Bernie Sanders will never be president. From his chairman’s seat on the Budget Committee, however, he has steered vital legislation toward passage in perilous congressional seas, and body-blocked ersatz progressives from positions of significant government power. Just over the horizon lurk all-important issues like infrastructure, immigration, the minimum wage, climate disruption and the ongoing fight against COVID.

After decades shouting truth in the wilderness of U.S. politics, Sanders is making the most of his chance. He is steering the Biden administration toward a genuinely progressive course, and is paying little heed to the fountaining hypocrisies of the Republican right. Two months in, he is already enjoying great success, which means the Biden administration is enjoying great success. Next to Representative Clyburn, Chairman Sanders may be the best friend Joe Biden has ever had.

William Rivers Pitt is a senior editor and lead columnist at Truthout. He is also a New York Times and internationally bestselling author of three books: War on Iraq: What Team Bush Doesn’t Want You to Know, The Greatest Sedition Is Silence and House of Ill Repute: Reflections on War, Lies, and America’s Ravaged Reputation. His fourth book, The Mass Destruction of Iraq: Why It Is Happening, and Who Is Responsible, co-written with Dahr Jamail, is available now on Amazon. He lives and works in New Hampshire.