The Death Of Local News 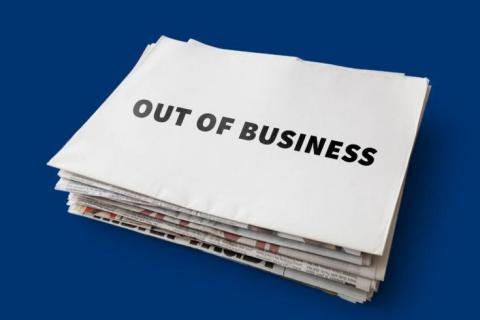 A recent story in the Statehouse File began with an all-too-familiar report.

Two years ago, Indiana had 70 daily newspapers. Now there are fewer than 50, and over the last year, 13 paid circulation newspapers in the state closed their doors.

The story relayed the personal experience of editors and others at the papers that closed, and went on enumerate the consequences for local communities that have lost their newspapers–either entirely, or by “ghosting” in the wake of acquisitions by companies like Gannett (now part of the even more rapacious Gatehouse).

Citizens who have lost what we used to call “watchdog journalism” are significantly disadvantaged by not knowing what is going on in their communities. Studies show losses in community cohesion, voter turnout and civic participation. Taxpayers take a hit, too– a recent study, “Financing Dies in Darkness? The Impact of Newspaper Closures on Public Finance,” showed that newspaper closures were followed by higher costs of issuing bonds. (Presumably, bond purchasers anticipate a higher degree of risk when no one is watching the store.)

It isn’t just Indiana. The Guardian recently considered the threat to journalism’s future posed by the degree to which hedge funds are snapping up distressed properties.

As the pandemic recedes in the United States, few businesses may emerge so transformed as local and regional newspapers.

More than 70 local newsrooms have closed over the past 15 months, with hundreds of media jobs lost, as the already difficult financial conditions in the industry intensified during the crisis. By some estimates, a staggering 2,100 local newspapers, or one in four, have closed in the US since 2005.

But into the carnage a new breed of owner has emerged: one that has industry veterans and media observers deeply worried about the future of journalism in America and its ability to act as part of a functioning democracy.

According to a recent analysis, hedge funds or private equity firms now control half of US daily newspapers, including some of the largest newspaper groups in the country: Tribune, McClatchy and MediaNews Group.

Needless to say, these hedge funds have zero commitment to journalism. Their entire focus is on the bottom line and the return on their investments. Groups like Alden Capital have earned a reputation for ruthlessness by dramatically cutting editorial staff and selling off assets to boost profits.

As the editor of the Columbia Journalism Review has noted,

The debate we need to have is do we value these newspapers as an investment like a car dealership or a pawn shop, or do they have a different function in the community? I argue that they do, and they’re important to the way we function every day, but local communities need to buy into that idea.

If professional, verifiable news gathering is lost, a significant percentage of the American public will be left to the not-so-tender-mercies of the Breitbarts and their leftwing analogs.  Aside from bias, these outlets add to the increasing nationalization of news and politics–they aren’t replacing the local newspapers we’ve lost.

It will be interesting to see what happens in New Bedford, Massachusetts, where the  New York Times reports that– following the “ghosting” of the Standard Times, the local paper, employees decided to create an alternative. They created a digital paper, The New Bedford Light.

The Light, which has no print edition, is free to readers. It does not accept advertising, relying on donations, grants and sponsorships from local businesses. It plans deep community involvement, including media literacy workshops for residents who might become contributors.

It is largely following a playbook for digital nonprofit news sites prepared by the Institute for Nonprofit News, a group that guides start-ups and emphasizes editorial independence and financial transparency.

According to the Times, similar nonprofit news sites are appearing across the country. There are hundreds now online, and more than 50 have gone up in the last two years.

None, to the best of my knowledge, have emerged in Indiana.

For those of us who are determined to figure out what’s going on in our city and state, there are  reliable, specialized sources we can consult. What we don’t have, however, is a “one-stop” source that doesn’t just give us the news we are looking for, but the answers to  questions it wouldn’t occur to us to ask–and an explanation of why we should care.

What we also don’t have are substantial numbers of citizens who read the same headlines and stories, and as a result, occupy the same reality.

As we are seeing with the Big Lie, it’s one thing to argue about what a particular fact means; it’s another matter altogether to argue about a “fact” you’ve invented. The first argument strengthens democracy; the second one justifies democracy’s abandonment