The Long Troubled United States Relations With China: U.S. Globalism, the Open Door Notes, and the Centrality of China for Building A Global Empire 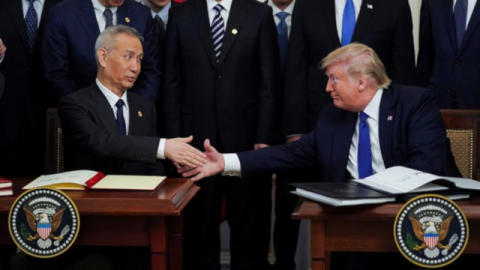 The developing United States international obsession with China (leaving aside the super-exploitation of Chinese labor and profound anti-Chinese racism in the United States), has its roots in the rise of the US as a great power. As historians such as William Appleman Williams have pointed out, the United States emerged as an industrial power on the world stage between the end of the Civil War and the 1890s. Not only was the US economy experiencing industrialization, but private entrepreneurs were building a transcontinental railroad, with Chinese labor, to create a vast continental empire. Coupled with industrialization, a vast transportation network, was the development of agricultural surpluses, well-beyond the consumer needs of persons in the United States. Williams concluded that by the 1880s the United States, because of increased agricultural productivity, began to seek world markets for its goods (The Contours of American History, 1961).

Increasingly the industrial and agricultural revolutions in the United States were leading to increased competition with European imperial powers and the rising Japanese empire. A  sector of the United States political class, exemplified by former Secretary of the Navy and soon-to-be President Theodore Roosevelt, argued for the United States to develop a global vision and a naval military capability to facilitate becoming a global empire, particularly to challenge Europe. After diplomatic skirmishes with Great Britain over who should have dominant influence in Latin America, the United States entered the Cuban anti-colonial war against the Spanish empire in 1898. (Over the subsequent years until 1959 the United States replaced Spain as the colonial overseer of Cuba). In addition, the United States took Puerto Rico, reaffirmed its dominance over the Hawaiian Islands and seized control of the Philippines. To further the globalization of US empire President Roosevelt was able to get Congressional support for a “two-ocean” navy. The United States was on the road to becoming a world power.

But the lack of control of the political economy of China remained an obstacle to the completion of the imperial project. The 4,000 years old Chinese empire, controlling vast amounts of land, people, and neighboring countries had begun to deconstruct in the nineteenth century. The Opium Wars of 1839-42 and 1856 were carried out by Great Britain and later France, Germany, and Russia to force China to open its domestic markets to foreign penetration, and further, to the development of spheres of influence for each of these countries (and Japan). The devolution of the Qing Dynasty and the defeat of Chinese nationalists during the Boxer Rebellion in 1901-1902 seemed to solidify European and Japanese control over the vast Chinese empire.

Fearful of being frozen out of the vast potential Chinese market, President William McKinley’s Secretary of State, John Hay, issued two “notes” to European powers in 1899 and 1900 indicating that the United States would insist upon equal access to Chinese markets, even in areas of the country that had been seen as part of the “spheres of influence” of the colonial powers.

Traditional interpreters of United States foreign policy, such as George Kennan, regarded John Hay’s Open Door Notes as examples of typical U.S. diplomatic bluster; empty threats that could not be backed up by economic or military power. Williams in his classic, The Tragedy of American Diplomacy, argues that the Notes were emblematic of the development of United States global imperial power.

What had been the nineteenth century vision of U.S. domination of Latin America, the Monroe Doctrine, was being applied to Asia as well. The defeat of the Spanish, the occupation of the Philippines, the development of a two ocean navy, burgeoning agricultural products, a vision of American exceptionalism often articulated by Theodore Roosevelt and spokespersons of both political parties, all made it clear that domination of China was to be a key global project of the twentieth century.