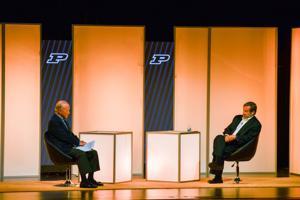 So this weekend I watched a little bit of Mitch Daniels’ interview of Steve Koonin - he’s the physicist who wrote a book saying climate change is real, but it’s not bad. At one point, Koonin says, in a dismissive way, that Africa needs fossil fuels for development, they can’t possibly get their needs met through solar and wind, “it’s not enough.”

Since my focus has been on his shoddy science (everyone and their mother has written rebuttals), It seemed like a random thing to say. But I read about the problems of electricity in Africa and it hit me THIS IS HIS PURPOSE. IT’S ABOUT PERSUADING INVESTORS TO BACK FOSSIL FUELS IN AFRICA.

A great deal of the continent suffers from lack of access to any electricity - and those who have it, don’t have it consistently.

And the population is expected to grow much faster than the US.

AND solar and wind are in a GREAT position to provide energy for Africa. THEY GET MORE SUN THAN ANYONE!! AND SOLAR POWER IS GETTING CHEAPER AND BETTER!!

Western policies have made it more difficult for African countries to build more coal plants, but some are underway nonetheless. The president of Uganda just wrote an editorial complaining that climate change mitigation policies imposed on them are unfair because (a) they need more energy now, (b) coal is the cheapest way to get it, and (c) Western countries have had the advantage of using cheap energy even though it polluted-his country has just as much right to release CO2, and their emissions will be a tiny fraction of what the US has done. Which makes sense - and is the reason for giving them support to go solar. Because otherwise they’re trapped by a dependency on coal. WHICH IS WHAT THE INDUSTRY WANTS!!

When I read about the battle over electricity in Africa, and saw Conservatives who promoted Koonin’s book by saying “Look, we’re not so bad after all” - all of a sudden the publicity given to Koonin by right-wing media made sense.

The science part is a giant red herring. Nobody’s reading his critiques of computer modeling, any more than we read past page 50 of Stephen Hawking’s book.

The point is to soothe investors who’ve strayed from FOX news and caught a glimpse of reality - and to keep growing the demand for coal and oil.

And here’s my conspiracy theory - I think Koonin’s been groomed by the Heartland Institute starting at least 10 years ago, when he was in Obama’s DOE. Because Koonin has a big mouth and he’s kind of naive.

When Koonin worked on developing renewables for BP, he said in an interview that governments were going to have to tax people “until it hurt” to get us off of fossil fuels. How was that a smart thing to say?

“‘Industry’s goal is not to deploy the most innovative or the greenest technology. The goal is to make money,’ he said. And the scale of investments in energy is so vast that even the government is not in a position to make much of a dent through direct investment: A single, large oil company spends almost as much on research and development per year as the entire Department of Energy budget, he said.

So to spur innovation and the deployment of new forms of energy, regulation and financial incentives are key, he said. He cited as an example the way installations of new wind turbines in the United States have risen and fallen in lockstep with the back-and-forth passage and repeal of production tax credits for the industry.”

If there’s anyone oil companies would want to influence, it has to be Koonin’s big mouth.

Koonin claims to have had a come to Jesus moment at an APA committee meeting in January, 2014, where he brought 3 Heartland Institute denialist scientists to debate 3 famous climate research scientists (including MacArthur grantee Benjamin Santer). But that’s not the truth. Koonin chaired that committee, which was in charge of reviewing the APA’s statement on climate change. Koonin set up the meeting, and when his deniaists lost - he quit the committee. Koonin came into that room with his mind already made up. Why would a savvy person even work with Heartland, who has been funded by and promoting the fossil fuel industry’s lies for 3 decades?

Koonin’s been exploited by right-wing media repeatedly while promoting his book. He keeps having to correct interviewers, explaining that “actually, climate change IS real” as the chevron blasts “OBAMA SCIENTIST REVEALS HOAX”.

I think he maybe DID want to “restore integrity to science”, as he claims. But bad affiliations - and his own ego - have accomplished the opposite.