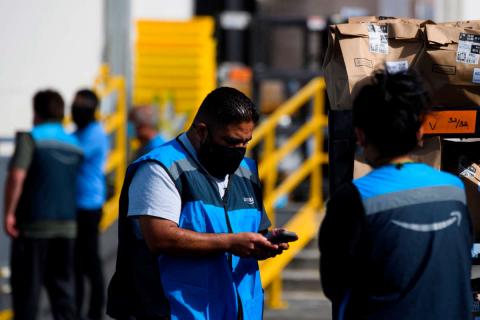 An Amazon delivery driver scans bags of groceries while loading a vehicle outside a distribution facility on February 2, 2021, in Redondo Beach, California.

If a warehouse worker was injured on the job in 2021, there was about a 50 percent chance that they worked for Amazon, a new report highlighting dangerous working conditions at the company has revealed.

Though Amazon employed only about 33 percent of warehouse workers in 2021, it was responsible for 49 percent of warehouse injuries that year, according to a damning new report from the Strategic Organizing Center (SOC), a coalition between four major labor unions. The report analyzes data from the Occupational Safety and Health Administration (OSHA).

In 2021, the company’s serious injury rate was 6.8 per 100 full-time equivalent workers, the new report found. This is more than double the serious injury rate of other warehouses, which have an average rate of 3.3 per 100 workers. With 7.7 injuries of any type per 100 Amazon workers filed with OSHA last year, Amazon’s workers suffered injuries at a far higher rate than those in the rest of the industry, who experienced 4.0 injuries per 100 workers.

The report’s authors say that the reason for Amazon’s high injury rate is the company’s strict quotas and “obsession with speed,” which it monitors using invasive surveillance systems that track workers’ every move. The company also pushes hurt workers to keep working while they are recovering, even if the work will perpetuate the injury or make it worse.

Musculoskeletal disorders like carpal tunnel or back pain are common among Amazon workers, investigations have found. Repetitive, strenuous movements place strain on workers’ bodies, and symptoms often linger long after the initial injury.

The company’s policies appear to have a direct influence on its injury rate. While the rate increased each year between 2017 and 2019, from 7.5 injuries to 9.0 per 100 workers, the rate dropped to 6.6 injuries per 100 workers in 2020 — the same year that the company temporarily lightened its quotas in response to the pandemic. Although the policies were only in place for a few months, it was long enough to have a tangible impact on the company’s injury rate.

To distract from their poor injury rates — and Washington state OSHA investigations into the Seattle-based company that have found wrongdoing — Amazon said last year that it would be spending millions on increasing safety and that it would halve the injury rate within the next five years. Yet the same year that the company made that pledge, the injury rate increased.

“The facts show that for all of its public relations efforts, Amazon is not doing enough to keep workers safe,” SOC authors wrote. “Amazon could choose to slow the pace of work or ease the pressures of its oppressive monitoring systems. But after doing so in 2020 to accommodate pandemic safety precautions, the company largely returned to its old systems of surveillance and pressure in 2021 — as reflected in the injury data.”

Amazon warehouse workers have been waging union campaigns in part because of working conditions in their facilities. Workers in Bessemer, Alabama, who are organizing with the Retail, Warehouse and Department Store Union, and Amazon Labor Union, which recently won a union in New York, have said that improving working conditions are a central plank of their campaigns. At BHM1, the unionizing facility in Alabama, the report found that serious injuries increased by a whopping 43 percent last year.

The company can afford to ease its quotas, SOC pointed out in its report. While its policies appeared to push workers to injury, the company’s profits grew by 50 percent from 2020 to 2021, from $21.3 billion to $33.4 billion; meanwhile, Amazon chairman Jeff Bezos gained over $52 billion in net worth during the course of the pandemic alone.