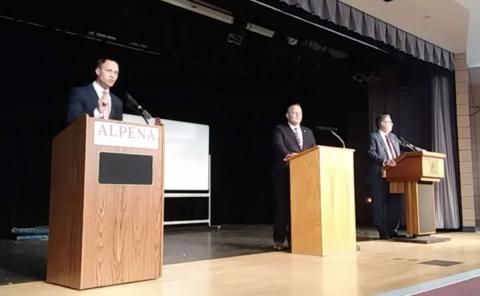 Three Republican candidates for attorney general in Michigan, vying to win their party’s primary so they can attempt to oust the current Democratic incumbent, indicated support for undoing a landmark Supreme Court decision from over half a century ago that lifted restrictions to accessing birth control.

Former state House Speaker Tom Leonard, current state Rep. Ryan Berman, and Matthew DePerno, a lawyer in the state who has pushed false claims of election fraud in the 2020 presidential election, met on Friday in Alpena, Michigan, for a debate over who should become the Republican nominee for state Attorney General. During the event, a member of the audience asked the candidates what their views were on the Supreme Court case Griswold v. Connecticut, a ruling made in 1965 that guaranteed couples in the U.S. the right to receive information on and access to contraceptives.

All three candidates were “caught off guard” by the question, according to reporting from The Detroit News, and were apparently ignorant of what the ruling entailed. Upon further clarification, however, all three candidates indicated opposition to the Supreme Court’s ruling, saying that it violated states’ rights to restrict access to birth control for their residents.

“The Supreme Court … has to decide, mark my words, that the privacy issue currently is unworkable. It’s going to be a states’ rights issue on all these things, as it should be,” chimed in DePerno.

Berman said he needed to do more research on the ruling, but also stated that he’s for “states’ rights” and in favor of limiting “judicial activism” at the federal level.

Current Democratic state Attorney General Dana Nessel responded to the comments from the three men with shock, writing on Twitter her own response to their views.

“The party of ‘limited government’ wants direct involvement in everything you do in the bedroom,” Nessel wrote. “The Handmaids Tale is no longer dystopian fiction.”

In another tweet, Nessel made a promise to voters to defend against the undoing of Griswold.

“As MI Attorney General, I will continue to defend the constitutional right to privacy and to ensure (and, oh my God, I can’t believe I have to say this) your legal right to use contraceptives in our state,” Nessel said. “This is definitely a campaign promise I never imagined having to make.”

Seeking to clarify their stances, the Republican candidates for attorney general tried to stipulate that they weren’t against contraception or birth control, but rather the way the Supreme Court had ruled in 1965.

“Our rights should be grounded in the Constitution’s text and tradition, not a judge’s feelings,” Leonard said in a statement on Monday, adding that Nessel’s comments indicated, in his mind, that she is a “fringe culture war activist.”

Leonard, who admitted his ignorance about the ruling, wrongly purported that the Constitution was not involved in the forming of Griswold. In fact, several constitutional amendments and the precedent they created were cited in the Court’s 7-2 decision forming a penumbra of rights that allowed the justices to affirm a right to privacy in certain situations.

“Would we allow the police to search the sacred precincts of marital bedrooms for telltale signs of the use of contraceptives? The very idea is repulsive to the notions of privacy surrounding the marriage relationship,” the Court’s opinion stated.

The ruling also referenced the Ninth Amendment, found within the Bill of Rights, which recognized that the “enumeration in the Constitution, of certain rights, shall not be construed to deny or disparage others retained by the people.”

Responding to Leonard’s comments made on Monday, Nessel asked whether other rulings from the Court – including those disallowing restrictions on marriage rights, access to education, and other topics – were improperly made, since they trampled on supposed states’ rights.