If We Don’t Act Now, the Entire US Could Become a “Cancer Alley” 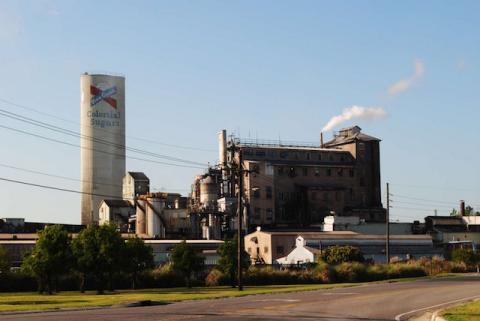 People across the country are waking up to structural racism and coping with police brutality and civil unrest while also living through the nightmare of the COVID-19 pandemic. They’re mourning losses and longing for life to get back to normal.

But in St. James Parish, Louisiana, where I’m from — a predominantly Black and low-income community nicknamed “Cancer Alley” — racism, brutality, loss and unrest are normal. In fact, a new plastics complex and President Trump’s decision to gut the National Environmental Policy Act (NEPA) stand to make things even worse.

Democratic presidential nominee Joe Biden mentioned St. James Parish in his clean energy plan speech because we’re notorious for having the country’s highest concentration of chemical plants and refineries, the highest cancer rates, the worst particulate pollution and one of the highest mortality rates per capita from COVID-19 in the nation. For those of us living here, it’s not just Cancer Alley; it’s death row.

Imagine living in a hotspot like this, which has had standout rates of illness and death for 40 years. Now imagine a foreign company seeking to redouble the pollution and health risks you’re already facing, wipe out your local history and target those who object for arrest on draconian charges. Then imagine on top of all this that Washington is gutting the law that contained the few environmental protections that remained to help communities like yours. That’s exactly what’s happening in St. James Parish now.

Formosa Plastics Corporation is a Taiwan-based company whose Texas plant illegally dumped massive amounts of plastic pellets (or “nurdles”) into the Gulf of Mexico, and the company paid the largest fine of any suit against an industrial polluter brought by a private citizen in U.S. history.

Formosa’s new project was considered too polluting for Taiwan, so it chose to site it in Cancer Alley instead, calling it — get this — “the Sunshine Project.” It obtained Louisiana Gov. John Bel Edwards’s blessing and environmental permits to build a giant, $9.4 billion, 14-plant complex — one of the largest plastic plants in the world — on 2,500 acres in St. James Parish.

For those of us living here, it’s not just Cancer Alley; it’s death row.

The plant would more than double the area’s already heavy toxic air pollution; more than triple exposure to cancer-causing chemicals, including emitting more carcinogenic ethylene oxide than anywhere else in the U.S.; and discharge more waste into the St. James Canal and the Mississippi River.

The Formosa project is part of a larger, industry-wide push to vastly expand plastic production and consumption. The feedstocks (or unprocessed material) for plastics are the petrochemical byproducts of fossil fuel production. But as demand for fossil fuel energy falls, the industry plans to keep expanding fracking, drilling and refining by building hundreds more plants to extract more ethane, the main ingredient in plastic, and producing and selling more plastic. That stokes climate pollution and plastic pollution, both of which are already choking the planet. In fence-line communities of color like mine, where the plants are overwhelmingly located, it’s killing people.

These facts have been hushed-up and spun by the plastic and petrochemical industries, but it’s increasingly coming out. The true extent of the plastic crisis is exposed in the documentary film The Story of Plastic, where Ronnie Hamrick, who worked at the Formosa Plastics plant in Texas, says, “I worked 25 years at the plant as a supervisor, but I had to get out of there because I got tired of the bullcrap — lying for them — because that’s all you do out there at that plant is lie.”

Plastic industry executives doubled down on lies to roll back plastics bans and pretend more single-use plastic is needed to ensure public health during the pandemic.

Plastic industry executives doubled down on lies and spin in the COVID-19 crisis, using it as an excuse to roll back plastics bans and pretend more single-use plastic is needed to ensure public health during the pandemic. But at a briefing of the House Oversight Committee’s Subcommittee on Environment in July, titled, “Plastic Production, Pollution and Waste in the Time of COVID-19: The Life-Threatening Impact of Single-Use Plastic on Human Health,” experts refuted this, testifying how petroleum and chemical plants are making COVID-19 worse, and how they destroy African American communities.

“What’s left are the gravesites of these communities,” said Monique Harden, assistant director of law and policy at the Deep South Center for Environmental Justice, “and over those gravesites the towering smokestacks, storage tanks, and processing units of petrochemical facilities.”

In St. James Parish, the Formosa project site includes at least one African American graveyard from around 1877, and probably others. The company knew it, and planned to build a pipeline through it but didn’t even tell Parish officials until community groups like mine exposed them. Formosa claimed we couldn’t prove the graves were there, and we had to go to court to get a restraining order just to go to the site, which the company tried to block.

If Trump and the plastic industry get their way, what’s “normal” here in Cancer Alley could soon become normal in the rest of the country.

On Juneteenth, the day that commemorates emancipation from slavery in the U.S., members of my organization, RISE St. James, went there to honor our ancestors. Formosa and local officials, meanwhile, celebrated by charging two peaceful activists from the community group Louisiana Bucket Brigade with “terrorizing,” because they had left a box of nurdles Formosa had illegally dumped on the lawn of an industry lobbyist in December 2019. Now these activists face possible jail sentences of up to 15 years.

I’ve been warned that other activists like me face arrest, too. But we’re not cowed, we’re not going to stop fighting, and we’re getting traction. We’ve sued the U.S. Army Corps of Engineers for improperly approving the Formosa project, and obtained a stop-work order that blocks the company from building the complex while the lawsuit plays out. U.S., Taiwanese and Vietnamese groups in the #StopFormosa campaign even went to Taiwan recently to protest at the Formosa shareholders meeting.

We may yet defeat the Formosa plant, like we defeated the Wanhua Chemical plant before it. But our fight in Cancer Alley is now the whole country’s fight. The plastic industry plans hundreds of new plants in the U.S., and worldwide. In July, the Trump administration rolled back protections and disclosure requirements in NEPA that have made our work possible, with the express intention of making more projects like these harder to fight.

Here in St. James Parish, almost no family has escaped from illnesses caused by industrial pollution, including mine. I have autoimmune hepatitis and aluminum in my body. Our cancer rates and COVID-19 rates are among the highest in the country. But we’re not just an outlier; we’re the canary in the coal mine. If Trump and the plastic industry get their way, what’s “normal” here in Cancer Alley could soon become normal in the rest of the country.

Sharon Lavigne is the founder and president of RISE St. James, a grassroots, faith-based organization dedicated to opposing the siting of new petrochemical facilities in St. James, Louisiana, out of concern for the worsening health effects and environmental pollution.

This article was produced by Earth | Food | Life, a project of the Independent Media Institute.