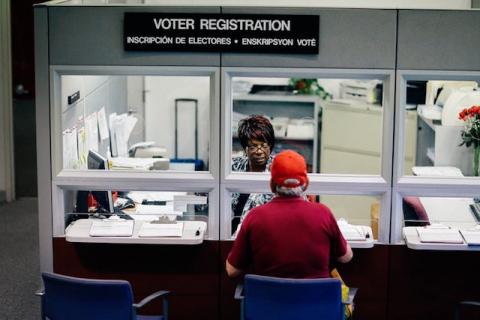 The first thing you need to understand about Florida’s poll tax—which U.S. District Judge Robert Hinkle sharply limited on Sunday—is that the state has no idea how to implement it. Setting aside the racial and democratic implications, the law sounds straightforward: It obligates former felons to pay all fines and fees associated with their sentence before they can cast a ballot. The scheme might function properly if Florida could identify residents with unpaid court charges and calculate how much they owe. But the state cannot do any of that, because it does not know who owes courts money or how much they owe. And even if ex-felons try to unearth their court-imposed fines and fees, they will probably fail. In most cases, reliable records do not exist.

This chaos gives people with felony convictions two choices. They can register to vote and hope that state prosecutors do not later dig up court debts and bring criminal charges against them. Or, to avoid risking jail time, they can surrender their constitutional right to vote. On Sunday, in a 125-page decision, Hinkle ruled this predicament unconstitutional. In doing so, he meticulously detailed the extraordinary negligence and incompetence exhibited by Florida lawmakers as they rushed to stop ex-felons from voting. That record will make it very difficult for an appeals court—even one stacked with Trump judges—to reverse his decision. It will be impossible for any judge to overturn Hinkle’s ruling without carrying water for the GOP.

Florida Republicans have long sought different measures to make voting harder, leading one federal judge to accuse them of leading an “obscene,” “undeclared war on Floridians’ right to vote.” But in November 2018, voters overwhelmingly passed Amendment 4, an initiative that repealed a Jim Crow–era law that permanently revoked suffrage from anyone with a felony on their record—even after they served their prison sentence and completed probation or parole. It should have enfranchised about 1.4 million people. But Republicans were convinced that the amendment would benefit the Democratic Party, since Florida’s ex-felons are disproportionately nonwhite, and racial minorities tend to vote for Democrats. So they raced to pass SB 7066, which compelled ex-felons to pay all fines and fees connected to their sentence before they could legally vote.

If that sounds like a fair restriction on a fundamental right, remember that Florida is a pioneer in cash register justice: It literally funds its criminal justice system through a mind-boggling array of fines and fees imposed on everyone unfortunate enough to get arrested in the state. The nickel-and-diming spirals as you move through the system. You must pay to get a public defender. You must pay for medical care behind bars. You must pay to reinstate a suspended driver’s license. You must pay for drug abuse treatment, for electronic monitoring, for your own urinalysis. There is no exception for indigent defendants. And none of it is cheap: As Hinkle noted, one Florida county charges a minimum of $668 for a public defender and $548 if you forgo public defense. Even if you represent yourself, you must pay for the pleasure of appearing in court. And those costs go up when defendants are charged with multiple counts.

Curiously, although Florida devised this scheme, it never created a uniform method of tracking payments. The Legislature left that job to the counties, whose own records are often out of date or incomplete. Some counties hire private debt collectors who add a 40 percent surcharge on unpaid court debt. Most debts still go unpaid. In 2018, the Florida Court Clerks and Comptrollers, an association that attempts to track court assessments, labeled 83 percent of court fines levied between 2014 and 2018 as having “minimal collections expectations.” That means they’ll probably never be paid. The same association reported that counties collect just 20.55 percent of fines and fees levied in circuit criminal courts, where most felony cases take place.

In 2019, before holding a trial on SB 7066, Hinkle ruled that the Constitution likely prohibits Florida from disenfranchising residents who are unable to pay these costs. But his decision was extremely narrow: It forced ex-felons to prove that they couldn’t pay. Hinkle also gave Florida wide latitude to devise a legal process for people eligible for voting rights restoration to prove their indigence. During the trial, state attorneys disclosed that Florida had failed to do so. Nor had the state made any headway identifying the amount that ex-felons still owe. As Hinkle wrote on Sunday, the only way to glean this information is to obtain a copy of the “judgment” against them from the county where it was issued. But due to messy, decentralized record-keeping, that approach almost always fails. As Hinkle explained:

A group of well-trained, highly educated individuals—a professor specializing in this field with a team of doctoral candidates from a major research university—made diligent efforts over a long period to obtain [court debt] information on 153 randomly selected felons. They found that information was often unavailable over the internet or by telephone and that, remarkably, there were inconsistencies in the available information for all but 3 of the 153 individuals.

Even when ex-felons can get a copy of their judgment, it is frequently ambiguous, failing to identify precisely how much a defendant must pay. During trial, a state official was asked to interpret one such inscrutable judgment. She admitted that she did not understand it. That official was Maria Matthews, the director of the Division of Elections, who is implementing SB 7066. If Matthews “cannot say who is eligible,” Hinkle concluded, it’s obvious that “some voters also will not know.”

In theory, the Division of Elections screens all voter registrations for felony convictions and, now, unpaid fines and fees. But a state budget analysis found that the division would require at least 21 extra employees to screen the flood of applicants in light of Amendment 4. And the Legislature provided it with zero. As a result, there is currently a backlog of about 85,000 pending voter registrations from newly eligible Floridians. Matthews estimated that her office would need 1,491 days to get through the backlog. If her entire staff worked weekends and holidays, then, it might be finished in time for the 2024 election. But that is wishful thinking, because, in the 18 months since Amendment 4 passed, Matthews’ office has not finished reviewing a single registration from an ex-felon. It has found no reliable method of determining how much they owe. Virtually every attempt to calculate this figure—by both state officials and expert accountants hired by the defendants—produces inconsistencies and discrepancies. The information does not exist.

Republican lawmakers knew the information didn’t exist when they passed SB 7066. Voting rights advocates told them they were crafting an unworkable system, yet they forged ahead anyway. The goal of the bill, after all, was not to collect revenue for the state. The goal was to undo Amendment 4, to make it so arduous for formerly incarcerated people to vote that they just gave up. But it wound up being so outrageously onerous that it crossed the constitutional line.

Hinkle concluded that SB 7066 constitutes a forbidden tax on the vote in violation of the 24th Amendment, as it’s applied to Floridians who can’t pay their court fines and fees. He also found that the state will violate residents’ due process rights unless it provides them with an efficient, reliable method of determining their eligibility to vote. Hinkle ordered the state to let voters request an “advisory opinion” on their eligibility from the Division of Elections. If the office doesn’t respond within 21 days, the individual can legally vote. Florida relied on the inertia of the system to keep people from voting. Now the state’s inertia will restore their right to vote.

If the office denies eligibility due to unpaid fines and fees, it must identify the precise amount owed. If the applicant demonstrates an inability to pay, however, the state must allow them to vote. Applicants can easily prove their indigence by filing an affidavit or simply noting that they were assigned a public defender.

This remedy, as Hinkle acknowledged, is imperfect. But it is far superior to Florida’s haphazard approach, which state officials revealed to be an abject failure at trial. The state will now appeal to the 11th U.S. Circuit Court of Appeals, which already upheld Hinkle’s narrow preliminary injunction. This time around, though, a different panel of judges will review the decision. Donald Trump recently flipped the 11th Circuit, meaning a majority of its judges were appointed by Republicans. So it is possible that a panel of Trump judges will smack down Hinkle. And even if the 11th Circuit agrees with Hinkle, the Supreme Court could reverse it.

But there is reason to believe that higher courts, even right-leaning ones, might just let Hinkle’s decision stand. In the process of defending SB 7066, Florida humiliated itself, revealing the extreme incompetence of myriad legislators, election administrators, and county officials. It is now painfully clear that would-be voters have no dependable way to figure out what they owe. The state plainly hoped this system would dissuade people from even attempting to vote for fear of criminal prosecution. In passing a poll tax, it also transformed its registration procedures into a Kafkaesque bureaucratic nightmare for 1.4 million Floridians. To reverse Hinkle’s order, a court would have to rationalize that nightmare, to claim that the state has not, in fact, infringed on residents’ constitutional right to vote. That cannot be done in good faith. Conservative judges may be eager to rubber-stamp run-of-the-mill voter suppression, but they sometimes shy away from especially egregious disenfranchisement. It is hard to see why courts would stick their necks out to defend Florida’s clown show.

However, On Friday, the 11th Circuit Court of Appeals overturned a lower court ruling that had struck down the Florida GOP's modern-day poll tax, making it all but certain that the law will remain in effect for November.

Republicans passed their law last year after voters amended Florida's constitution in 2018 to end lifetime voter disenfranchisement for up to 1.4 million people who had served out sentences for all but the most serious crimes. An expert witness for the plaintiffs estimated that 775,000 citizens would be unable to pay the poll tax, in large part because Florida levies onerous fines to fund its court system. The court noted, for instance, that one county charges a minimum of $668 for a public defender—and $548 even for defendants who forgo one. Furthermore, 43% of the disenfranchised are Black, roughly three times the African American share of the state's overall adult population.

Before voters passed the 2018 initiative, Florida disenfranchised one in 10 adults, the highest proportion of any state, including one in five Black adults—five times the rate of white adults in Florida. This racial discrimination was no accident, either, since Florida’s lifetime voting ban was a product of the Jim Crow era.

In striking down the poll tax, the lower court's ruling meant that it's unconstitutional to condition voting rights upon the payment of court fees and costs. While requiring the payment of fines and restitution to victims can be constitutional in certain instances, the court said, it was unconstitutional when applied to citizens who are genuinely unable to pay the costs or who owe an amount that cannot be determined. Indeed, the state effectively makes it impossible for many voters to even find out the exact amount owed because Florida lacks adequate records.

Consequently, the poll tax will prevent potentially hundreds of thousands of Florida citizens from exercising their rights this year despite the Constitution's 24th Amendment banning the disenfranchising of voters "by reason of failure to pay any poll tax or other tax." While the 11th Circuit acknowledged that 85,000 voters with felony convictions have registered since voters passed the 2018 initiative, it still granted Florida officials the power to disenfranchise them once more if the state can prove that they still owe court costs.