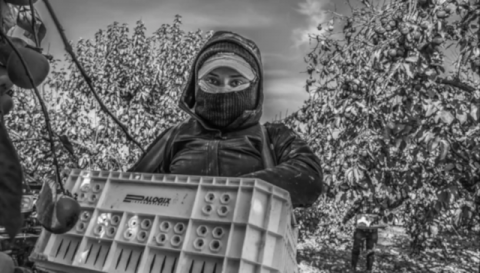 Oakland, CA—As the Biden administration begins dismantling Trump's anti-immigrant legacy and contemplates reforms to US immigration policy, it will have to take the crucial decision of whether to continue or terminate the H-2A “guest worker” program.

A new report by the Oakland Institute, Dignity or Exploitation — What Future for Farmworker Families in the United States?, documents the systematic abuse of workers in the H-2A program and its impact on the resident farmworker communities, confronted with a race to the bottom in wages and working conditions.

“The H-2A program has created a captive labor force, made to work in brutal and often illegal conditions. In practice, it is not far from slavery,” said David Bacon, author of the report, based on years of research and interviews. “The majority of these migrant workers arrive in the US already in debt. Department of Labor regulations permit companies to subject them to quotas that require them to work at an exhausting speed. Efforts to organize against exploitative conditions have been met with terminations, deportations and blacklisting — all legal under the program’s regulations, even when those working conditions have led to death,” Bacon continued.

H-2A workers also face disproportionate exposure to the COVID-19 pandemic. The report describes some of the most acute situations, and analyzes the basic reason for the high infection rate — congregate housing, or barracks, where workers sleep in bunk beds. This housing has been held legal by authorities responsible for workers' health.

The report details how the competition between “guest workers” and the domestic labor force depresses the wages, increases the pressure to intensify and speed-up work, and undermines the bargaining power of all farmworkers in the US. Growth of the H-2A program has also exacerbated an existing housing crisis for rural workers, as recruitment has skyrocketed from 10,000 visas in 1992 to over 250,000 in 2020.

The exploitative conditions and vulnerability of migrants who came under the H-2A program are very close to those of the bracero program that was in place from 1942 to 1964. The Immigration and Naturalization Act of 1965, which put an end to the bracero program, established an immigration system based on family reunification and community stability, protecting the wages, rights, health, and housing of farmworkers. This system is under increasing threat today.

“Restoring the family preference system and halting the H-2A program are two of the most important decisions that will face the Biden administration in regards to the direction of US immigration policy,” said Anuradha Mittal, Executive Director of the Oakland Institute.