FBI Has Found No Evidence of Antifa Involvement in Capitol Attack, Says Director 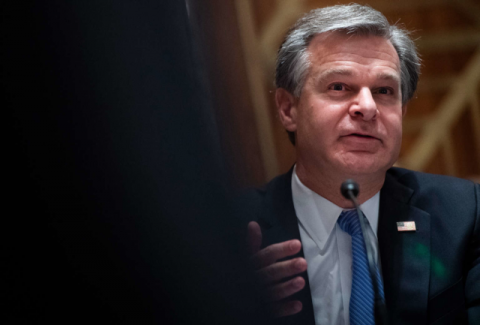 On Tuesday, Federal Bureau of Investigation (FBI) Director Chris Wray confirmed that the agency has not been able to find evidence of people associated with antifa or other left-wing ideologies in connection with the attack on the Capitol on January 6.

At a testimony before the Senate, Wray said that there is no evidence that there were “fake” Donald Trump supporters at the Capitol attack and that, “We have not to date seen any evidence of anarchist violent extremists or people subscribing to antifa in connection with the 6th.”

Wray qualified that the failure to turn up anything that might indict left-wingers was not for lack of trying. “We’re equal opportunity in looking for violent extremism of any ideology,” Wray said. This both-sidesism appears to be exercised to a fault by the FBI: Shortly after the right-wing attack on the Capitol, FBI agents arrested a left-wing activist who was not connected to the attack for expressing leftist beliefs online.

Though the FBI has not found any evidence of left-wing activity from January 6, Wray told the Senate, “That doesn’t mean we’re not looking.” The FBI has a long history of targeting the left, specifically Black activists. That tradition was on display last summer when the FBI used surveillance technology to target and track Black Lives Matter protesters.

Since Trump supporters violently attacked the Capitol, Republicans like Sen. Ron Johnson of Wisconsin and the former president have vehemently pushed the narrative that it was actually people who subscribe to anti-fascism who showed up in mobs to overturn the results of the election. This has been debunked many times over, including now by Wray.

Still, the GOP’s disinformation campaign surrounding the Capitol attack has worked: A poll from January found that half of Republicans polled think that anti-fascists were responsible for the Capitol breach. That’s despite the fact that many of the over 260 people who have been charged in federal court for their involvement with the violent coup attempt have stated their allegiance to Trump in court documents; some of the people who were at the Capitol that day have unequivocally said that it was Trump supporters, not the left wing, who were responsible for the attack.

Wray also denounced the attack as terrorism during the testimony. “That attack, that siege was criminal behavior, plain and simple, and it’s behavior that we, the FBI, view as domestic terrorism,” he said.

“Jan. 6 was not an isolated event,” Wray continued in his opening statement. “The problem of domestic terrorism has been metastasizing across the country for a long time now and it is not going away any time soon.”

Specifically calling out the far right Proud Boys and the Oath Keepers, Wray said that the FBI has found people associated with white supremacist movements and militias among the mob on January 6. He noted that, since he began serving as director of the FBI in 2017, arrests for white supremacist violence have increased significantly.

Right-wing violence, in general, has been on the rise across the globe in the past years and, in the U.S., right-wingers and white supremacists were particularly energized by Trump’s presidency. Though the right has been fearmongering about left-wing violence since protests for racial justice sprang up last year, white supremacists and people with right-wing beliefs have continually been shown to be responsible for the vast majority of domestic acts of terror in the country.