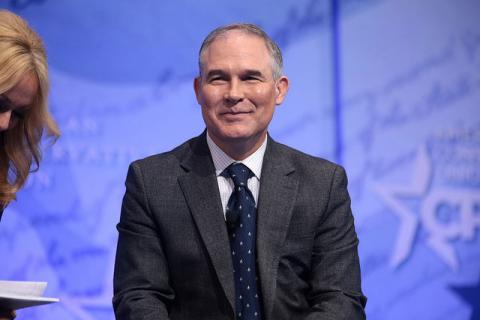 The Environmental Protection Agency (EPA) sent out a notice on Wednesday announcing a series of upcoming public meetings in which it will consider gutting rules and regulations meant to protect the public from lead and hazardous chemicals, including training programs designed to prevent children from being exposed to lead paint.

The notice went out at 2:30, just as EPA Administrator Scott Pruitt was meeting with residents of a neighborhood in East Chicago, Indiana, that has been contaminated with lead for decades. Six weeks after beleaguered residents petitioned his agency to take emergency action to protect them from lead contamination in their drinking water, Scott Pruitt was visiting East Chicago as part of the kick-off tour for his term as administrator of the EPA.
[…]
The EPA said the it scheduled the reviews of the lead standards in order to comply with President Trump's executive order requiring federal agencies to identify regulations that should trimmed or eliminated. Trump tapped Pruitt to run the EPA earlier this year, praising a long list of legal challenges he filed against federal environmental regulations as attorney general of Oklahoma.
(From Mike Ludwig, truthout, 4/21/17)