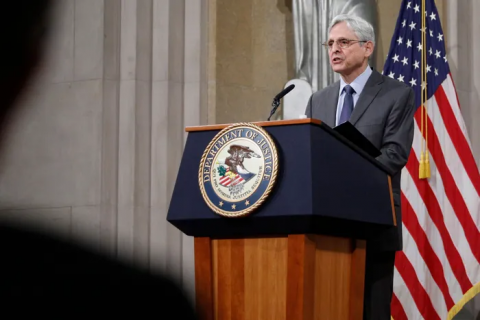 Even if, as appears more likely every day, Congress does nothing in 2021 to strengthen federal voting-rights laws, stronger enforcement of existing laws by the U.S. Department of Justice would be far better than nothing. And that’s exactly what Attorney General Merrick Garland pledged to undertake in a speech on Friday. “He said that within 30 days the department would double the Civil Rights Division’s voting rights enforcement staff and committed to working with other agencies to combat voting-related disinformation,” Politico reports. This would give new assistant attorney general for civil rights Kristen Clarke a much better chance to initiate an effective voting-rights strategy absent new legislation.

Alluding to the profusion of new voting restrictions being enacted by Republican-controlled state governments from Georgia to Florida to Iowa to Texas, Garland promised fresh scrutiny from the Justice Department:

Garland said that “many of the changes are not calibrated to address the kinds of voter fraud that are alleged as justification,” and said that DOJ is scrutinizing them to determine whether they violate federal statute.

“Where we see violations we will not hesitate to act,” he said.

The AG also cast a dim light on the bizarre “audits” under way in Arizona and other states aimed at undermining the legitimacy of settled 2020 election results.

While the administration would undoubtedly welcome the new tools for voting-rights enforcement contained in the For the People Act and the John Lewis Voting Rights Act that nearly all congressional Democrats favor and nearly all Republicans oppose, existing law does give DOJ significant powers to initiate lawsuits against discriminatory state and local actions under Section 2 of the Voting Rights Act of 1965 (the more powerful Section 5 preclearance requirement was gutted by the U.S. Supreme Court in 2013; restoring it is the central purpose of the John Lewis legislation). But fully utilizing those powers will require adequate resources, which is what Garland is now promising to supply.

It’s not an ideal situation for voting-rights advocates, but at least they know they will have some powerful friends in Washington who can do something about voter suppression.