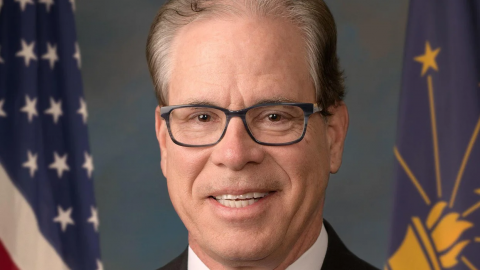 Sen. Mike Braun (R-Ind.) is facing serious blow back for his remarks arguing the legalization of interracial marriage should not have been a U.S. Supreme Court ruling but rather a decision left to individual states. The controversial remarks came during the confirmation hearings held for President Joe Biden's SCOTUS justice nominee, Ketanji Brown Jackson.

At one point during his questioning of Brown Jackson, Brau complained about what he described as "judicial activism" as he highlighted a number of historic rulings he appeared to have issues — with interracial marriage being one of them.

"When it comes to issues, you can't have it both ways," Braun said. "When you want that diversity to shine within our federal system, there are going to be rules and proceedings, they're going to be out of sync with maybe what other states would do. It's the beauty of the system, and that's where the differences among points of view in our 50 states ought to express themselves."

Shortly after making the remarks, Braun attempted to backpedal. In a statement offering further explanation for his remarks, the Indiana lawmaker wrote: "Let me be clear on that issue — there is no question the Constitution prohibits discrimination of any kind based on race, that is not something that is even up for debate, and I condemn racism in any form, at all levels, and by any states, entities, or individuals."

However, that still wasn't enough to quell the critical reactions that followed. Shortly after reports began circulating about Braun's remarks, lawmakers from both sides of the aisle, political candidates, Indiana residents and other Twitter users began flooding the social network with critical reactions.

Mike Schmuhl, who serves as the Indiana Democratic Party's chairman, quickly fired back with blistering comments in response to Braun's remarks which he described as "un-American."

"The United States Supreme Court has affirmed many times that marriage equality in our country extends to any committed couple regardless of sex, race, orientation, or religious affiliation, and to question that legitimacy questions the very fabric of America and its people," Schmuhl said.

Schmuhl went on to slam the Republican Party's "culture wars" which he believes are impacting America's future.

"Democrats implore all Hoosiers to ask themselves if they want to be associated with someone as embarrassing as Mike Braun and a form of partisanship that endorses white nationalist views — because these are the same views that led to the insurrection against our nation on January 6, 2021," he said. "If Mike Braun wants to question the legitimacy of anything, it should be his own standing as a United States Senator. He cheated his way into office and consistently shows that he does not represent us.”

However, Democrats aren't the only ones slamming Braun for his remarks. Some Republican lawmakers and candidates have also pushed back in disagreement. Speaking to The Indy Star in an emailed statement, Indiana Republican Party chairman Kyle Hupfer said he believes "some rights are so 'intrinsic' that they cannot be left up to states, and one of those is ensuring 'racial equality.'"

"As for my thoughts on the issue at hand, I believe there are some rights that are so intrinsic to us as humans and Americans that the states cannot be left to decide those issues on their own," Hupfer said. "That includes ensuring racial equality in all aspects of life."

Others took to Twitter to express their concerns. "It is appalling that a US Senator from IN claims that the US Supreme Ct shouldn’t decide the right of people to marry inter-racially," tweeted Mayor Thomas McDermott (D), who is running for the Indiana Senate. "I condemn [Senator Braun] ‘s comments and I urge [Sen. Todd Young] to join me in condemning views that should be left behind in our nation's past.

From a second Twitter account, McDermott tweeted, "The modern-day GOP has become a disgrace. Comments like these, from a sitting US Senator, were wrong in the 1950’s, and are appalling in the year 2022. It’s up to us #Hoosiers to take care of business and drive backwards thinking politicians out of Washington DC."

Members of interracial families have also pushed back against Braun for his offensive remarks.

While some Twitter users expressed frustration over Braun's remarks and antics from other Republican lawmakers, other users mocked the lawmaker for his blunder.

Rep. Alexandria Ocasio-Cortez (D-N.Y.) went a step further in dissecting Braun's statement. The lawmaker shared her interpretation of his statement as she challenged him to speak publicly again and denounce his previous remarks.

"Senator Braun’s statement does not walk back what he said," Ocasio-Cortez tweeted.

She concluded, "He needs to go on the record to clarify whether he believes states should be allowed to reinstate anti-miscegenation laws, and whether it’s his belief SCOTUS should overturn Loving v. Virginia as he does w/ Roe v. Wade."