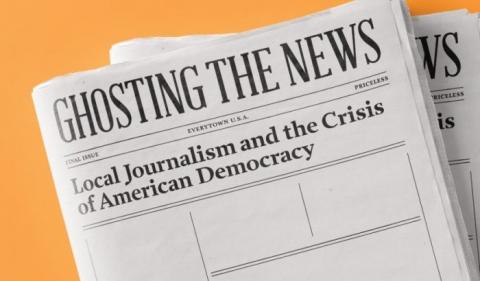 What’s happened to local news in our medium-size city north of Boston is a story that could be told in hundreds of communities across the country.

The first time we lived here, in the early 1980s, we were served by a vibrant, locally owned daily newspaper. When we returned nearly 30 years later, the daily, a shell of its former self, would soon go out of business, leaving the field to a weekly owned by GateHouse Media, now merged with Gannett. Since last fall, the paper hasn’t employed a single full-time staff reporter. And with the Covid-19 pandemic prompting more cuts, that’s not likely to change any time soon — if ever.

This depressing scenario is the subject of Margaret Sullivan’s new book, Ghosting the News: Local Journalism and the Crisis of American Democracy. The book is part of the Columbia Global Reports series of “novella-length” paperbacks and ebooks. At a brisk 132 pages, Sullivan lays out the crisis in community and regional journalism and suggests some possible solutions.

“The decline of local news is every bit as troubling as the spread of disinformation on the internet,” Sullivan writes, adding: “Some of the most trusted sources of news — local sources, particularly local newspapers — are slipping away, never to return. The cost to democracy is great. It takes a toll on civic engagement — even on citizens’ ability to have a common sense of reality and facts, the very basis of self-governance.”

Ghosting the News is a useful introduction to the decline of local, and Sullivan is an ideal guide. Currently the media columnist for The Washington Post, she previously worked as the penultimate public editor of The New York Times and — of relevance to the matter at hand — as editor and vice president of The Buffalo News, until recently owned by the billionaire investor Warren Buffett.

Buffett proved to be a disappointment. Despite being a self-confessed newspaper junkie who was at one time a trusted adviser to the legendary Post publisher Katharine Graham, he showed little interest in efforts aimed at reinvigorating the shrinking newspaper business. Instead, he was content to manage their decline, cutting staff and taking out what profits remained before selling his chain of 31 papers to Lee Enterprises earlier this year.

As Sullivan describes it, the News at one time ran up margins of some 30 percent while making few investments in technology. She takes credit for improving the diversity of the staff and expanding the paper’s investigative efforts. But with the Great Recession of 2008 came the beginning of an endless downward spiral.

Sullivan doesn’t ignore the role of greed-crazed hedge-fund owners and corporate chains such as Alden Global Capital and Gannett, which are squeezing the life out of hundreds of local and regional newspapers. But she sidesteps it a bit by focusing on the death of The Vindicator, a family-owned newspaper in economically depressed Youngstown, Ohio, that went under (sort of) in 2018. It’s a wise choice on her part, since the owners of The Vindicator clearly wanted to stay in business; their fate shows that there’s more to the story than capitalism run amok. They gave up only after losing money for 20 of the previous 22 years.

Yet, as Sullivan acknowledges, the media ecosystem quickly expanded to fill at least part of the gap. The Tribune Chronicle of nearby Warren began publishing a Youngstown edition called (you guessed it) The Vindicator. The nonprofit investigative news organization ProPublica assigned a reporter to Youngstown. The McClatchy chain (now struggling to emerge from bankruptcy) launched a digital regional news site, Mahoning Matters, with some funding from Google.

What has happened in Youngstown parallels what I’ve seen in my own reporting on local news. In places like New Haven, Connecticut, and Burlington, Vermont, entrepreneurial journalists have launched for-profit and nonprofit news projects in response to the market failure of their legacy daily newspapers. In rural Mendocino County, California, where Alden has laid waste to its four papers, the founders of a small website called The Mendocino Voice have ambitious plans to convert to cooperative ownership and expand their reporting staff.

Such projects don’t fully make up for what has been lost. But they provide a compelling counter-narrative to the prevailing pessimism. Yes, as Penelope Muse Abernathy of the University of North Carolina has documented, we’ve lost more than 2,100 newspapers over the past 15 years. In some places, though, new ventures have arisen to take their place — a trend that we can expect will continue.

Sullivan highlights a number of these projects, from East Lansing, Michigan, where volunteers report for a website called the East Lansing Info, to Pflugerville, Texas, where a new chain of free print newspapers is thriving. She also takes a look at the Arkansas Democrat-Gazette, home to an unusual experiment by which readers are being given free iPads to replace their print newspaper.

Among the solutions Sullivan suggests are an expansion of the nonprofit model; more funding from the digital advertising giants Google and Facebook, which depend on local news organizations for at least some of their content; more local coverage by public broadcasting outlets and commercial television; and possibly even direct subsidies from the government, seen as anathema until recently but now the subject of books such as Victor Pickard’s Democracy without Journalism?

In the absence of a comprehensive news source, residents of our city have taken to Facebook, NextDoor, Patch and email lists. Rather than “here is what’s happening,” we ask each other what’s happening. We rely on the mayor’s Facebook posts, on the police department’s text updates and on reports by citizens who have the time and inclination to sit through city council meetings on Zoom and write them up.

There’s a widespread narrative these days that this is what we want — that social media have taken the place of local newspapers, case closed, the end. That’s not what I see. If a real source of reliable news and information came along, I think my fellow residents would support it — if only it were available.

“The newspaper ties a region together,” Sullivan writes, “helps it make sense of itself, fosters a sense of community, serves as a village square whose boundaries transcend Facebook’s filter bubble.”

But as Clay Shirky, whom Sullivan quotes in her conclusion, has said, “Society doesn’t need newspapers. What it needs is journalism.” If you want to know what happened to local newspapers during the past quarter-century, Ghosting the News does a good job of laying it out. If you want to know what will take their place — well, check back a year or two after we have a vaccine.

Dan Kennedy is a professor of journalism at Northeastern University and a panelist on “Beat the Press,” a weekly media program on Boston’s WGBH-TV. His most recent book is The Return of the Moguls: How Jeff Bezos and John Henry Are Remaking Newspapers for the Twenty-First Century.