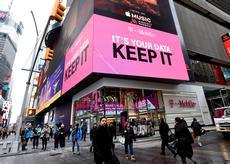 WASHINGTON — A National Labor Relations Board (NLRB) administrative law judge has ruled that T-Mobile created an illegal workplace organization while workers have been organizing a real, independent union for a voice at America’s fastest-growing wireless company. The judge ordered T-Mobile to immediately disband the company-controlled organization.

“If T-Mobile wants to address its workers’ concerns and ideas, we have democratically-elected representatives ready and willing to meet with management to discuss how we can improve our workplace,” said Angela Melvin, a T-Mobile customer service representative in Wichita, Kan., who sits on the steering committee of the employee-backed union, T-Mobile Workers United (TU). “We’re telling our co-workers: Your voice matters. Across the country, call center representatives, retail associates, and technicians are coming together to support one another and fight for fairness on the job.”

In a desperate attempt to stop TU, T-Mobile launched its company controlled organization, T-Voice, in 2015. This copycat organization was "chartered" to be the "voice" of employees and address their "pain points." Yet management has funded this organization, handpicked T-Voice representatives, and selected the issues that would get resolved.

In February 2016, CWA filed a NLRB charge outlining how T-Mobile had adopted this anti-union tactic that has been illegal since Congress enacted the National Labor Relations Act in 1935.

In striking down T-Voice, NLRB administrative law judge Sharon Levinson Steckler wrote, “Whenever an employer unlawfully establishes and maintains a dominated labor organization, that organization must be disestablished. … The rationale for doing so dates back to the earlier days of enforcing the Act: The dominated labor organization cannot function as a bargaining representative of employees and employees must have a choice to begin anew for organizing purposes.”

T-Voice has failed to stop the growing momentum and energy of the real union’s organizing campaign. One year ago, TU took a major step forward by formally electing Chief Stewards, co-workers who are their union representatives. Workers opened their first national field office in Wichita, and they continue to forge workplace partnerships with ver.di.
“Everyday, workers are seeking out TU for help tackling the challenges we face at work,” said Victoria Singer, a T-Mobile customer service representative in Albuquerque, NM. “T-Voice is not the voice of T-Mobile workers. It's an illegal organization run by the company to create the illusion of respect for workers. Everything we’ve accomplished is the result of TU members uniting, standing up, and speaking out. We will continue pushing for justice — particularly concerning the company’s unrealistic sales metrics and performance goals.”