What’s “in the Damn Bill” for Families? Bernie Sanders Wants You to Know. 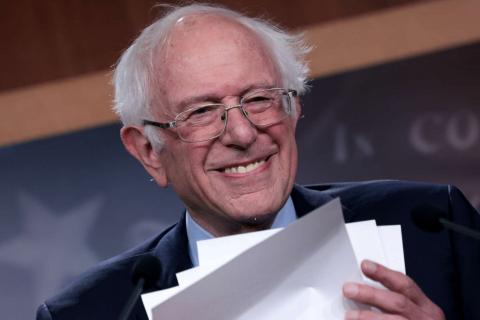 Sen. Bernie Sanders answers questions during a press conference at the U.S. Capitol on October 6, 2021, in Washington, D.C.

Sen. Bernie Sanders (I-Vermont) wants you to know “what’s in the damn bill.”

The chairman of the Senate Budget Committee is of course talking about the budget reconciliation package that Democrats are currently haggling over in Congress, a debate that Sanders and other progressives say the media has framed around the original $3.5 trillion price tag rather than the actual content of the legislation.

Sanders, Rep. Alexandria Ocasio-Cortez (D-New York) and progressive leaders held a panel discussion on Wednesday to lay out what the proposed $3.5 trillion in new spending over the next decade would pay for — and what could be lost as Democrats attempt to hammer out a deal with conservative Democratic Senators Joe Manchin of West Virginia and Kyrsten Sinema of Arizona.

“Brothers and sisters, what we are trying to do here is not radical,” Sanders said. “Much of what we are talking about exists today — it’s not a pipe dream — it exists in other countries. Guess what, we are the only major country on Earth not to guarantee paid family and medical leave.”

Seeking a compromise in order to push what’s left of his Build Back Better agenda through Congress, President Joe Biden pushed Democrats this week to accept a deal as low as $1.75 trillion. That’s roughly half the size of the $3.5 trillion package, which would be equivalent to only about 1.2 percent the nation’s economic output during the same 10-year time period.

Sanders, his Democratic allies and activist groups are now making a final push to rally public support for proposals in the reconciliation package that have proved highly popular in poll after poll but could be trimmed or eliminated in negotiations with Sinema and Manchin, whose votes are needed to pass the reconciliation package along party lines.

While proposals such as paid leave are whittled down or, like free tuition at community colleges, are likely dropped altogether, progressives hope they can salvage what remains by convincing voters that such programs can be fully funded by taxes on the wealthy and corporations.

“[Corporate lobbyists] want you and everyone out here who is watching at home, they want you to give up before the deal is done, because it’s way easier for them to try to get away with the things they are lobbying for and against if people at home aren’t watching,” Ocasio-Cortez said.

Topping the list are programs that have proven popular among parents, especially after the pandemic brought attention to the widespread need for paid leave and child care.

A national survey released this week by Family Story, a nonprofit group, found that 81 percent of adults support expanding paid family and medical leave for workers, including 87 percent of parents and 89 percent of mothers with children under the age of 5. Researchers say a national paid leave program would improve family health and well-being and reduce poverty by boosting incomes by a combined $28.5 billion each year.

The original Build Back Better proposal included up to 12 weeks of paid leave for people who suffer a serious medical condition or need to be a home caring for a new child or sick family member, with workers receiving about two-thirds of their regular income. However, paid leave could be reduced to four weeks or less in the compromise bill, leaving many new caretakers with only a month to care an elderly parent or a newborn child unless they drop out of workforce.

Currently, workplaces with 50 or more employees must provide 12 weeks of unpaid leave under federal law, but the United States is the only wealthy country without a paid leave guarantee. While most high-income workers have access to paid sick leave, only 33 percent of workers on the low end of the pay scale do, forcing many service industry workers to choose between putting food on the table and staying home when they are sick, according to the Economic Policy Institute. Women and workers of color are more likely to work low-wage jobs, and paid leave would help close income disparities.

The Family Story poll also found that a clear majority of respondents support boosting child nutrition programs and providing universal pre-kindergarten along with training and better wages for child care workers. Sixty-percent of parents said the COVID pandemic had impacted their child care arrangements, and nearly half said it’s difficult to afford child care in the first place.

Funding for child care and nutrition will still be included in the budget deal pushed by Biden, according to reports, but a push to extend or make permanent a popular child tax credit that comes as a direct payment to families is on the rocks. A one-year extension is more likely, leaving Congress to take up the matter again next year.

“This money will continue the $300 direct payment that working parents are now receiving, which has helped us through the American Rescue Plan to cut child poverty in half,” Sanders said. “That is a huge deal.”

Negotiations are largely occurring behind closed doors, but reports suggest that Manchin has said that Democrats must choose just one policy out of their top three for families in order to meet his $1.5 trillion spending limit — the child tax credit extension, paid leave or federal subsidies for child care. Other Democrats hope to keep entire programs off the chopping block, but their scope could be limited by income or even employment requirements, two methods for shrinking social programs favored by Republicans as well as Manchin.

Manchin is taking aim at programs that his critics say are both popular among voters and would benefit the people living in his home state of West Virginia, which remains one of the poorest in the nation despite environmental sacrifices made in the name of fossil fuel extraction. An analysis by the Institute for Policy Studies found that the original version of the reconciliation plan would create 17,290 new jobs in West Virginia, compared to the 7,410 jobs created under Manchin’s plan.

Media coverage often focuses on paid leave and child tax credit extension, but other programs that progressives have pushed for years could be trimmed or cut as well. Increased funding for housing vouchers could help a nationwide shortage of affordable housing. More funding for home care workers who provide for disabled people and the elderly would help stabilize families and keep people in the workforce. Of the nearly one in five adults who say they are a family member are in need of support for a paid caregiver, 78 percent say they can’t afford it, according to the Kaiser Family Foundation.

A plan to provide dental, vision and hearing coverage for older people in the Medicare program would also be a major investment in “care infrastructure,” but reports suggest that only the dental coverage may survive negotiations.

Manchin is often described as a “moderate” or “conservative” Democrat seeking to please voters in a red state, but activists warn he could face consequences at the polls by forcing cuts to programs that would benefit families and lower-income workers in West Virginia. A recent non-partisan poll found that 80 percent of West Virginians say Manchin should vote for the Build Back Better plan, including 77 percent of conservatives.

An estimated 50 percent of West Virginia voters are considered poor or low-income, meaning their combined household income is less than $50,000 a year, according to a new study by the Poor People’s Campaign: A National Call for a Moral Revival. Nationally, low-income voters made up 35 percent of the electorate in 2020 and played a decisive role in several battleground states. The Poor Peoples Campaign is holding a rally in West Virginia on Sunday demanding Manchin support the Build Back Better plan, as well as a $15 minimum wage and an end to the filibuster used by Republicans to block voting rights legislation in the Senate.

“The question is not how much does it cost to do this, but how much will it cost us if we don’t,” said Rev. Dr. William Barber, co-chair of the Poor People’s Campaign.