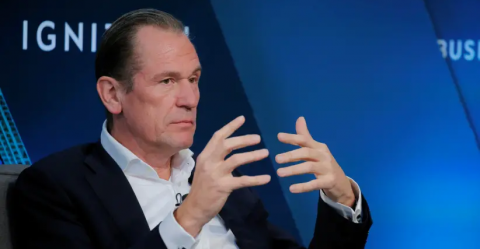 It’s been a rough time for German media giant Axel Springer. The company ousted the top editor at Bild, one of its most influential right-wing newspapers, over sexual harassment charges (New York Times, 10/18/21). Right before the pandemic, the group’s majority owner, the US-based investment firm KKR, delisted the stock from the Frankfurt Stock Exchange, taking the company private (Wall Street Journal, 1/24/20). And at the company’s biggest US outlet, Politico, journalists have sought to unionize (New York Times, 10/29/21).

But the salacious news and financial upheaval have appeared to overshadow that Axel Springer, named for its founder, had not only acquired Politico for $1 billion, but that the US government–focused publication would be expected “to adhere to the parent company’s principles, including support for Israel’s right to exist” (Ha’aretz, 10/17/21). Editorial staffers, however, “will not be required to sign a written commitment to these principles, as employees in Germany must,” to keep their jobs.

No semblance of objectivity 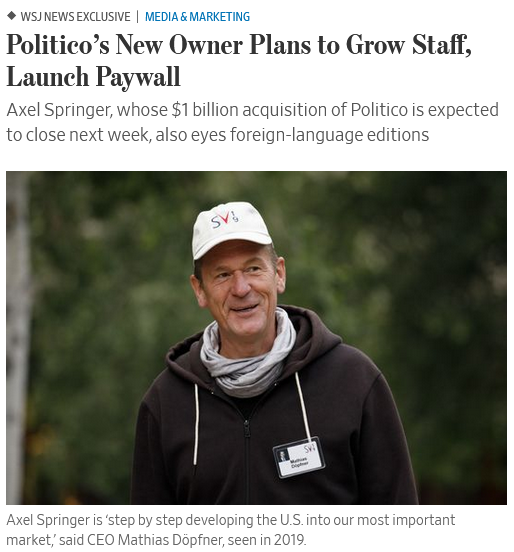 The pro-Israel press has been cheering on the rumored acquisition and the company’s commitment to Israel, quoting the company line that “anti-Israel” staffers should resign (Israel Hayom, 6/21/21; Jerusalem Post, 6/30/21; Tablet, 8/19/21). The media company has not pretended to maintain any semblance of objectivity in covering the Middle East; the Jewish Telegraphic Agency (8/31/21) noted that in the spring, “during the latest round of fighting between Israel and Hamas in Gaza, the company’s headquarters raised an Israeli flag as a show of support.”

Axel Springer has several central principles it expects its outlets to uphold, beyond “the right of existence of the State of Israel”—including “a united Europe,” “the trans-Atlantic alliance” and “a free market economy.” Company CEO Mathias Döpfner sees this explicit ideological agenda as somehow compatible with “his vision of unbiased, nonpartisan reporting,” the Wall Street Journal (10/15/21) reported, as opposed to “activist journalism, which, he said, is enhancing societal polarization in the US and elsewhere.”

The outward declaration that the news organization won’t just be pro-Israel but be a dedicated advocate for its cause, and expect its staff to adhere to this, is extreme even by US standards. Sure, many US outlets, like the New York Times, have shown deference to Israel in its Middle East coverage (FAIR.org, 5/16/12, 5/16/18; Mondoweiss, 9/14/21), but they don’t generally require their reporters and editors to have a specific opinion on the conflict. The Times (1/28/20, 5/14/21, 5/25/21) certainly airs Palestinian voices and criticism of Israel from time to time.

Politico is an important DC news outlet, so the prospect that under Springer it could become a public relations organ for Israel troubles even some advocates for Israel. Emanuel Miller, a media analyst for Honest Reporting, which according to its website responds to “inaccuracies or biases” in coverage of Israel, told FAIR in an email that while he believes Western reporting on the Middle East is biased against Israel, Axel Springer’s “declaration of support for Israel’s existence alone could have been reworked,” and that “perhaps a better approach would have been to express a commitment not to undermine the sovereignty and safety of people in any country.” (Emphasis his.) 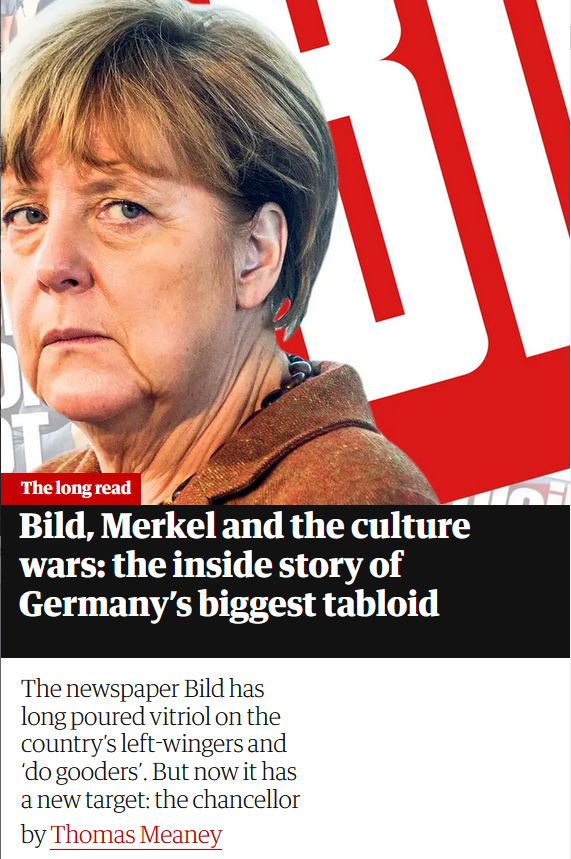 Guardian (7/16/20) : Axel Springer‘s powerful tabloid Bild believes the “best way to counter the left is to portray its demands as totalitarian, and the best way to kill off the far right is to cannibalize its grievances.

To call the company’s founder and namesake “Germany’s Rupert Murdoch” might be understating his importance. Axel Springer was called, upon his death, a “conservative and fiercely anti-Communist publisher who built West Germany’s biggest newspaper empire after World War II,” which includes, in addition to Bild, “the more serious daily Die Welt and dozens of weekly magazines and local newspapers” (LA Times, 9/23/85).

The Guardian (7/16/20) described “Bild’s core commitments” as “pro-US, pro-NATO, pro-Israel, pro-austerity, pro-capital, anti-Russia, anti-China.” These commitments are deeply rooted in the Cold War propaganda battles between the capitalist West and Soviet-aligned Eastern Europe, with Germany as a prime battleground. William Blum wrote, in his epic book Killing Hope: US Military and CIA Interventions Since World War II, that an

important recipient of CIA beneficence was Axel Springer, the West German press baron who was secretly funneled about $7 million in the early 1950s to help him build up his vast media empire. Springer, until he died in 1985, was the head of the largest publishing conglomerate in Western Europe, standing as a tower of pro-Western and anti-Communist sentiment. The publisher of the influential West German weekly Der Spiegel, Rudolph Augstein, has observed: “No single man in Germany, before or after Hitler, with the possible exception of Bismarck or the two emperors, has had so much power as Springer.” His relationship with the CIA reportedly continued until at least the early 1970s.

Axel Springer the company is an old-school conservative institution, spurning the isolationist and nationalist tendencies of Brexit and Trumpism. The above Guardian piece notes that the group hates the ascendant far-right Alternative für Deutschland party in Germany. It values big “globalist” institutions like NATO over the far-right, provincial anti-liberalism that has overtaken Hungary and Poland. 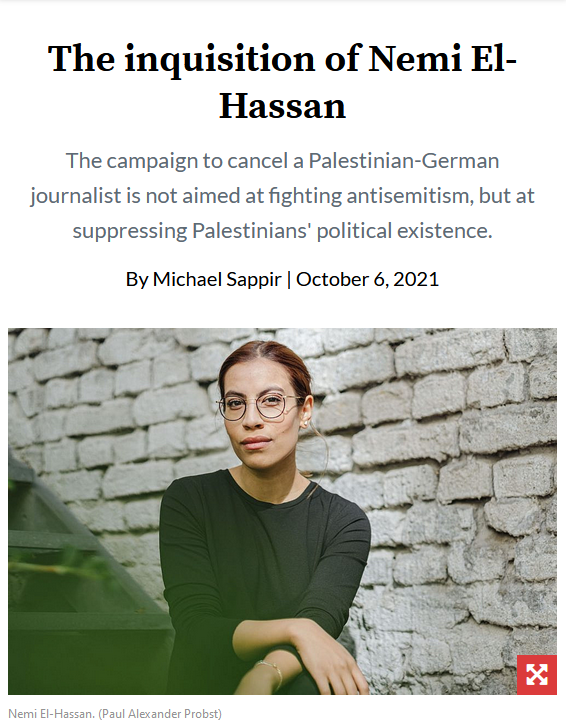 +972 (10/6/21): “Bild unleashed a second salvo of “evidence” that was to seal El-Hassan’s fate: as recently as a few weeks ago, she had ‘liked’ several Instagram posts by Jewish Voice for Peace, a pro-BDS organization based in the United States.”

Bild’s influence on dissuading German media from touching pro-Palestinian commentary is strong even today. +972 (10/6/21) reported that Nemi El-Hassan, a German from a Palestinian-Lebanese family, was initially slated to host a science show on the broadcaster WDR, but her invitation was revoked under insinuations of antisemitism, in a firestorm started by Bild.

After decrying “the public broadcaster’s announcement of her new job, Bild surfaced images of a 20-year-old El-Hassan in a hijab and keffiyeh,” taking part in a 2014 pro-Palestine protest in Berlin. She apologized to Der Spiegel (9/16/21) in an attempt to subdue the backlash, but this ultimately didn’t save her job. She said of both Bild and WDR (Der Tagesspiegel, 11/2/21; Berliner Zeitung, 11/2/21): “There is a line between critical journalistic work and a targeted campaign to dismantle a person. This limit was exceeded in my case.”

This is typical of the mood in German media today. Electronic Intifada editor Ali Abunimah (5/13/21) noted that state broadcaster Deutsche Welle apologized for having him interviewed about Israeli aggression in Gaza. The broadcaster sent a memo to staff after the incident, cautioning them against featuring such content in the future (Twitter, 5/15/21).

As Berlin-based Jewish journalist Fabian Wolff (ExBerliner, 5/27/21) put it, pro-Israel activists and operations like Axel Springer exploit the guilty conscience of Germans about the Holocaust, as well as antisemitic tendencies in the German left in the 1960s and 1970s:

The German media’s approach is not centered on Jews or how to best combat antisemitism. It’s more about making Germans feel good about themselves and feeding into a German superiority complex….

It’s more about Germans pretending to be on the side of Jews, so they can fight with people they disagree with politically, and then pretending it’s for the protection of the Jewish community, while often attacking people who are themselves Jewish. The people who use these accusations will totally consider themselves good defenders of Jews, even as they attack Jews in antisemitic ways. For years, my joke used to be that, if I ever started talking openly about how I feel about Israel, it will be the Germans who turn away from me—not the Jews.

The chief enforcer of this media attitude in Germany, Axel Springer, is now expanding its presence in the US market; it already owns Business Insider, the 15th most-popular news site in the US. The fear is that the company will weaponize its US presence against criticism of Israel and pro-Palestine perspectives the way it has in Germany. 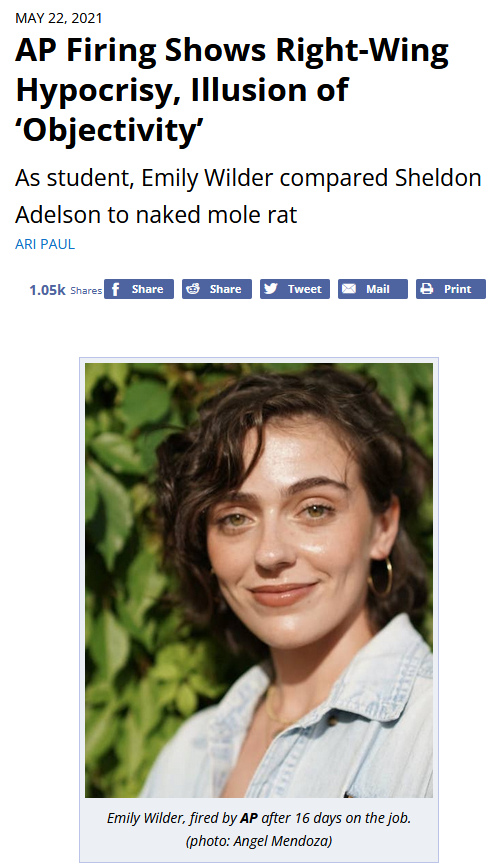 AP‘s firing of Emily Wilder (FAIR.org, 5/22/21) shows that criticism of Israel and its supporters is already tightly policed in corporate media.

The United States doesn’t have the same historic issues as Germany, but the pro-Israel activist community is clearly eager to narrow the public conversation in its favor. The Zionist Organization of America  (9/23/21) has not just criticized members of the “Squad” (the contingent of democratic socialist congressmembers), but has called for their discipline and ouster from committees, due to their skepticism toward continued US monetary support for the Israeli military. The AP fired a young Jewish staffer upon the demands of right-wing activists who cited her pro-Palestinian activity prior to her hiring (FAIR.org, 5/22/21).

Sonya Meyerson-Knox, senior communications manager at Jewish Voice for Peace, told FAIR, “We have every reason to believe that Politico will now take a leading role in pushing US media discourse further to the right,” adding that the Axel Springer’s pro-Israel mandate at Politico is not “only reprehensible and a clear affront to US media standards of neutrality,” but also “propaganda” masquerading as reporting.

For example, Meyerson-Knox pointed out that when Politico (10/25/21) reported that Facebook’s “efforts to curb hate speech in the Arab world were not working” because  it failed to monitor “Arabic-language hate speech and terrorist content,” the report didn’t “mention the incredibly high rates of Hebrew hate speech targeting Palestinians.” Such hate speech has been noted by the UN Human Rights Office of the High Commissioner (6/1/21) and the free expression group IFEX (6/17/21), she noted.

Politico is not in the same league as outlets that cover international conflict, like the AP or the New York Times, but it has become a go-to source for inside-the-Beltway news. If another outlet quotes Politico on Washington’s Middle East policy, will it essentially be repurposing pro-Israel PR? Will a Palestinian-American congressmember like Rashida Tlaib, or groups like Human Rights Watch that have labeled the Israeli occupation as “apartheid,” expect to get a fair shake from a Politico reporter?

As Meyerson-Knox asked, “Why would any individual or organization with a commitment to social justice have any faith in Politico’s reporting on any issue anymore?”