Big Panic For a Democracy That Never Was 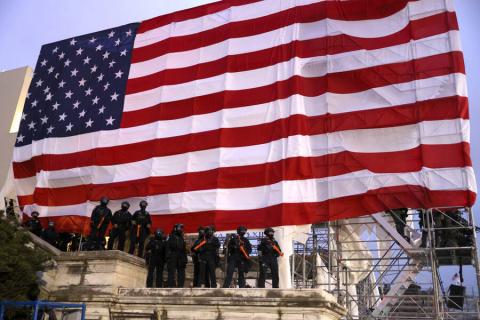 Donald Trump is no more of a threat to democracy than the U.S. Constitution itself.

It is 2021, and people have already started worrying about Donald Trump stealing the presidential election in 2024. That’s good, actually — far better than the alternative of staring in gape-jawed amazement when the World’s Dumbest Coup succeeds three years from now. But if Americans are truly concerned about the prospect of their country becoming one in which a minority destroys the rule of democracy, I have bad news: We’ve already been there for a while now.

In The Atlantic this week, Barton Gellman lays out at great length a dark and plausible scenario in which Donald Trump runs again in 2024, loses the election, but succeeds where he failed in 2020, by getting various Trumpist state legislatures and members of Congress to collude and hand him an electoral victory anyhow. It is clear that this very thing could happen. Extremist Republicans in a number of swing states are right now attempting to take hold of key positions that would allow them to toss out the will of the voters in their states and put forward pro-Trump slates of electors that would, of course, be ushered in by the slimeball wing of the Republican Party in Congress (read: the entire party) and rubber-stamped by a right-wing Supreme Court. If 2020 was a ham-fisted dry run for stealing a presidential election, 2024 will be a much better rehearsed one. There are too many uncertainties this far out to predict that this sort of thing will happen, but if you don’t think that it can happen you are dangerously delusional about the state of our politics today.

Gellman describes this awful scenario in grave terms, as a ​“Democratic collapse.” Elections expert Richard Hasen warns, ​“We face a serious risk that American democracy as we know it will come to an end in 2024, but urgent action is not happening.”

There is no doubt that if pro-Trump state legislatures were successful in using their position to ignore the popular vote outcome in their states, it would create a constitutional crisis. That is not the way the system is supposed to work. But what is the core fear here? It is not just blind fealty to the U.S. Constitution that Gellman is touting — the Constitution, after all, has been amended 27 times already, a pretty good sign that it was never considered perfect. Rather, the suggestion is that democracy itself will be shattered if these things come to pass.

“One of the minimal requirements for a democracy is that popular elections will determine political leadership,” Nate Persily, a Stanford election law expert, is quoted as saying. For Gellman, the idea that this bald Republican power grab might work represents an existential threat. ​“There is a clear and present danger that American democracy will not withstand the destructive forces that are now converging upon it,” he writes, because today’s Republicans are ​“willing to win at the cost of breaking things that a democracy cannot live without.”

I certainly agree with Gellman and others who feel alarmed that Trump and the Republicans will be willing and (maybe) able to steal the 2024 presidential election if the political stars align for them. Where I part ways is on the idea that this transgression would be a far greater outrage than anything we have seen before. That’s absurd. If your concern is that America is in danger of not having a democracy that represents the will of the people, you should look more closely at what America is.

Since its founding, America has had in place the Electoral College, an institution that exists solely for the purpose of subjugating the popular will of the people to that of the ​“states,” or, more generally, to the will of a select minority. How about recent history?

In 2000, Al Gore received 48.4% of the popular vote, and George W. Bush received 47.9%. Bush was elected president, thanks to the Electoral College.

In 2016, Hillary Clinton received 48.2% of the popular vote, and Donald Trump received 46.1%. Trump was elected president, thanks to the Electoral College.

No significant actions were taken by elected leaders to try to abolish the Electoral College after either of these elections.

In American history, a president has been elected who lost the popular vote five times. If Trump were to steal the election in 2024, he would not be the first to overturn the will of the voters. He would be the sixth. To assume that such an action by Trumpist forces would constitute a greater moral outrage than any of the previous times is to mistake bureaucratic rules with the underlying moral forces they are supposed to protect.

Take one very modest step back and consider the structure of the United States Congress. The House of Representatives is a democratically representative body, at least in its broad design. The Senate, in which the 580,000 residents of Wyoming are afforded the same amount of representation as the 40 million residents of California, is wildly undemocratic. In fact, the institution functions to give mostly white, rural Americans many times the proportional political power of more non-white urban Americans. Like the Electoral College, the Senate is anti-democratic: It exists explicitly to thwart the possibility that the United States government might function as a democratic representative of the popular will.

These bodies are core structures of the Constitutional design of our government. (We won’t even go into gerrymandering, campaign finance laws, voter suppression laws, the Supreme Court, the filibuster and other more fluid factors that also contribute to the existence of minority rule.) I say this simply to point out that America is not a democracy that is in newfound danger of being lost. It is an oligarchy facing a threat that is new in its specifics, but quite familiar in its goal of ensuring that a fanatic minority clings to power against the will of the majority of the public.

I am glad that Donald Trump and the Republican Party’s unabashed lust for power and complete lack of moral scruples are causing people to start panicking. Panic may lead to political reforms. That would be nice. But let’s not fucking kid ourselves here: This panic is not caused by the possibility that America might not be democratic. If that were the concern, we would have seen reforms in 2016, and in 2000, and, for that matter, in 1776. The fear today is that our Constitution may be forever damaged. It is worth remembering that our fetishism around that Constitution is what made us such an anti-democratic nation in the first place.

Hamilton Nolan is a labor reporter for In These Times. He has spent the past decade writing about labor and politics for Gawker, Splinter, The Guardian, and elsewhere. You can reach him at Hamilton@​InTheseTimes.​com.