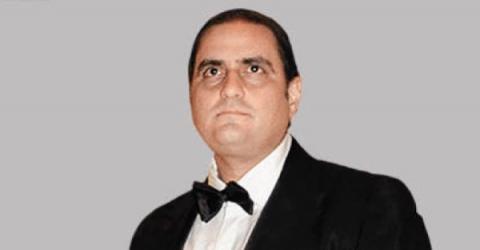 A Colombian businessperson named Alex Saab was traveling to Iran on behalf of the Venezuelan government in June 2020. His official mission was to negotiate shipments of medicine and other essential products to Venezuela.  He was arrested in Cape Verde at the behest of the US government, where he remains to this day; President Joe Biden has continued Donald Trump’s effort to extradite him to the US.

Western corporate media have been frank about the fact that Saab was targeted for helping Venezuela get around US sanctions. Though you’d struggle to learn it from those media, these sanctions have been directly linked to tens of thousands of Venezuelan deaths since 2017 (FAIR.org, 6/14/19). Articles about Saab’s case have also ignored all the powerful arguments that the sanctions are illegal under both US and international law.

Imagine being imprisoned for nonviolently attempting to prevent a heinous crime. That sums up the absurdity of Saab’s predicament–and Western media’s coverage of it. 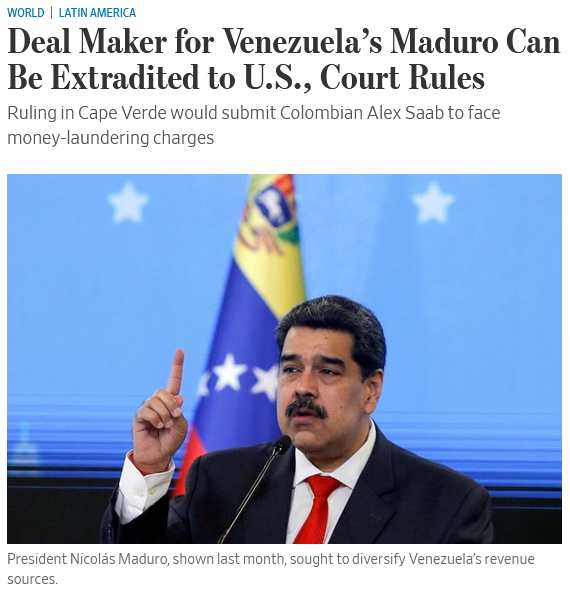 In January, a Wall Street Journal article (1/5/21) about Saab’s case quoted Martin Rodil, who it described as “a Venezuelan in Washington who works with federal agencies to recruit witnesses to build cases against corrupt Venezuelan officials.” Rodil told the Journal that US prosecutors want  to “go after the banks that have been helping Venezuela to sidestep sanctions.” Rodil explained that “Alex Saab was the guy who would go to China, he’d go to Turkey, he’d go to Dubai, Iran and to Eastern Europe, Serbia, that’s what’s valuable about him.”

Reuters (3/15/21, 3/18/21) has casually reported that Saab “faces extradition to the United States, which accuses him of violating US sanctions,” and that he has been “repeatedly named by the US State Department as an operator who helps Maduro arrange trade deals that Washington is seeking to block through sanctions.” A Reuters article (8/28/20) about Saab’s case in 2020 mentioned in passing that “the United States this month seized four cargoes of Iranian fuel bound for Venezuela, where fuel shortages are once again worsening.”

Apparently Reuters could not find an independent source to dispute the legality or condemn the extreme cruelty of seizing desperately needed fuel shipments to Venezuela (FAIR.org, 6/4/21). Was the news agency unaware that Alfred De Zayas (a former UN investigator assigned to Venezuela) has spent years arguing that the US violates the legally binding UN Charter by attempting to overthrow Venezuela’s government (Democracy Now!, 1/24/19)? 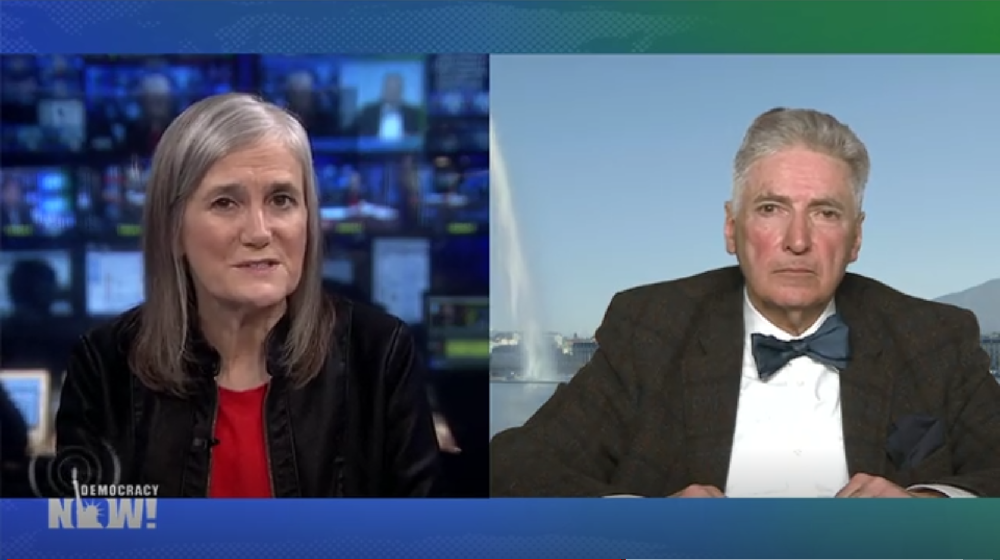 In fact, De Zayas said in 2019 that US sanctions on Venezuela should be investigated by the International Criminal Court as possible crimes against humanity (Independent, 1/26/19).

Article 2 of the UN Charter says: “All Members shall refrain in their international relations from the threat or use of force against the territorial integrity or political independence of any state.” Note that even threats are illegal under international law, never mind an actual use of force. Presumably, the Western media would consider it an illegal “use of force” if Venezuela were suicidal enough to seize urgently needed shipments to the US.

De Zayas, an expert on international law, has explained that

nothing in the UN Charter can be read as authorizing in any way unilateral coercive measures [sanctions], which are incompatible with general principles of international law, violate the prohibition of interference in the internal affairs of other states and violate their sovereignty.

He added that the repeated, near-unanimous UN General Assembly resolutions condemning the US embargo on Cuba “can be seen as a restatement of the law on unilateral sanctions.” De Zayas noted that even when sanctions are approved by the UN Security Council–as the Venezuelan sanctions are not–the Security Council itself

‘Coercive measures of an economic character’ 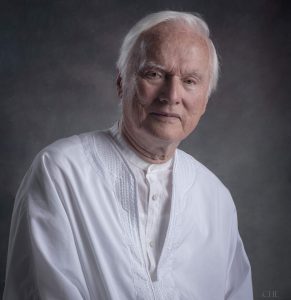 Idriss Jazairy (Ethics & International Affairs, 9/6/19): “Unilateral measures not only adversely affect the rights to international trade and to navigation, but also the basic human rights of innocent civilians.”

Moreover, the OAS Charter, which the US has signed, also has very strong anti-sanctions language:

No state or group of states has the right to intervene, directly or indirectly, for any reason whatever, in the internal or external affairs of any other state. The foregoing principle prohibits not only armed force but also any other form of interference or attempted threat against the personality of the state or against its political, economic and cultural elements.

No state may use or encourage the use of coercive measures of an economic or political character in order to force the sovereign will of another state and obtain from it advantages of any kind.

Again, if the US were the country being victimized, the media would not need legal experts to say that seizing fuel shipments, threatening military attack, deliberately inflicting economic hardships on the public and encouraging generals to overthrow the government were all gross violations of international law. The same applies to openly targeting a businessperson for trying to carry out business in the face of illegal sanctions. 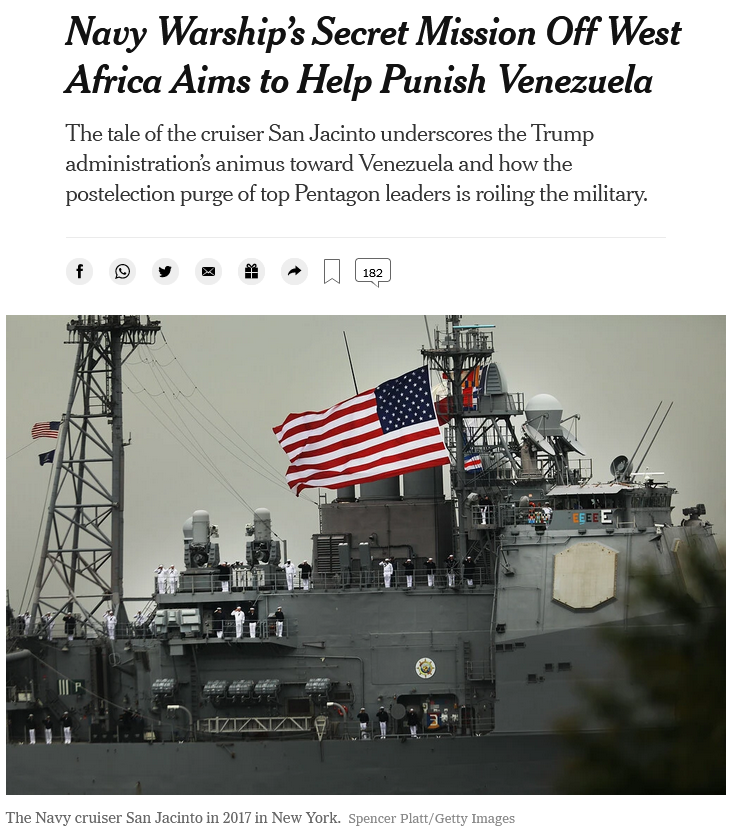 How could Reuters and other big Western outlets also have missed the detailed report written in 2021 by UN special investigator Alena Douhan, which called on the US to end its fraudulent “national emergency” regarding Venezuela? Independent journalist Slava Zieber interviewed Douhan about her report, but prominent Western media ignored it (FAIR.org, 6/4/21).

In US law, the outrageous lie that Venezuela poses an “extraordinary threat” to the US is the legal basis for a “national emergency” that justifies imposing sanctions. US aggression against Venezuela therefore shows as much contempt for US law as it does towards the UN Charter.

A New York Times article (12/22/20) last year about Saab’s case was nonchalant in mentioning US crimes :

The showdown over Mr. Saab is the latest twist in the tense relationship between the United States and Venezuela. In 2017, Mr. Trump said he would not rule out a “military option” to quell the chaos in Venezuela. In 2018, the Trump administration held secret meetings with rebellious military officers from Venezuela to discuss their plans to overthrow Mr. Maduro.

And in August, the United States seized more than 1.1 million barrels of Iranian fuel that was headed to Venezuela in a high-seas handover that blocked two diplomatic adversaries from evading American economic sanctions.

The US has been trying to overthrow Venezuela’s government since 2002 when the New York Times (4/13/02) and other US newspapers applauded a US-backed coup that temporarily ousted President Hugo Chávez, who died in 2013 (Extra! Update, 6/02).

One tactic the US has deployed against Venezuela, many years before it dramatically intensified its tactics to truly barbaric levels under Trump (and now Biden), is to claim jurisdiction over any use of the US financial system, however incidental.

The US indictment against Saab alleges that as far back as 2011, he was involved in paying bribes to Venezuelan officials in Venezuela. How on earth can the US claim legal jurisdiction over corruption that foreign officials and businesspeople (as opposed to US-based corporations) allegedly perpetrated in Venezuela?

When you have the world’s dominant financial system, you can (when it suits you) act as if you had jurisdiction over the whole world. That financial power is key to making US sanctions so devastating. For example, out of fear of violating US sanctions, Swiss Bank USB blocked payments that Venezuela made to the United Nations COVAX program to purchase Covid-19 vaccines.

Greg Wilpert and Joe Sammut explained in the book  Viviremos: Venezuela vs. Hybrid War (International Publishers, 2021), that “with more than 60% of central bank reserves, and most of commerce, in dollars,” the US government is well positioned to “weaponize” any use of its financial system to behave like a global dictator. US economist Michael Hudson argues that the US could use the SWIFT bank clearing system to make Europe “permanently dependent” and “under US control” (Grayzone,  5/12/21). 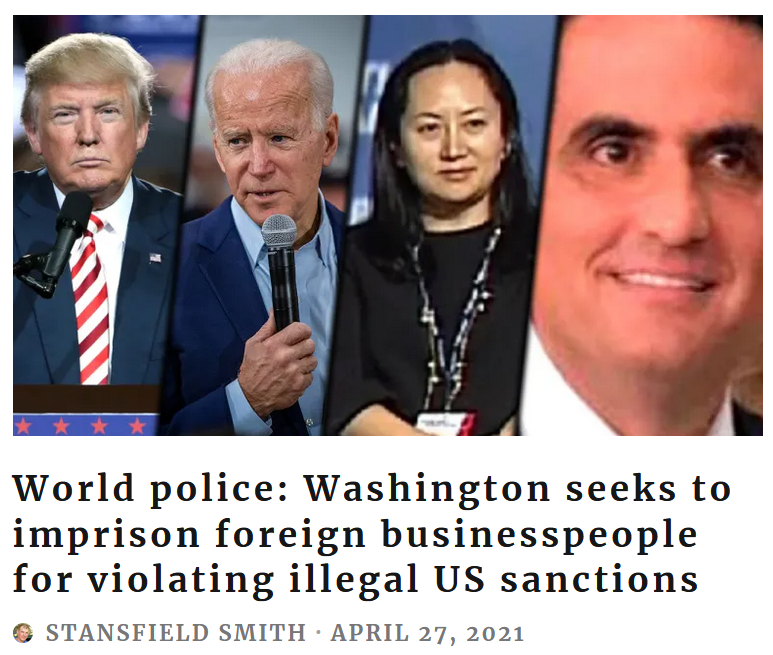 Stansfield Smith (Grayzone, 4/27/21) “The US government has taken its unilateral coercive measures to an even more ominous level by charging and attempting to extradite foreign businesspeople who have been abiding by international law, rather than the economic dictates of Washington.”

Writing for Grayzone (4/27/21), US activist Stanfield Smith reviewed Saab’s case, along with the similar prosecutions of North Korea’s Mun Chol Myong and Huawei executive Meng Wanzhou of China. Smith noted that the US has even used its financial might to threaten the International Criminal Court for moving to investigate US war crimes in Afghanistan:

National Security Advisor John Bolton bullied them, stating: “We will ban its judges and prosecutors from entering the United States. We will sanction their funds in the US financial system, and we will prosecute them in the US criminal system…. We will do the same for any company or state that assists an ICC investigation of Americans.”

This turned out to be no idle threat: The Trump administration ultimately slapped sanctions on the ICC and its staff.

Informed critics of US aggression can easily be found to comment on Saab’s case, if you read alternative media, but major corporate outlets in the West aren’t interested; they prefer to cite anonymous US officials claiming that fake critics exist online. A Financial Times article (3/17/21) about Saab’s case stated:

According to one intelligence analysis recently seen by the Financial Times, Caracas has used scores of false Twitter accounts in a bid to sway public opinion and pressure the Cape Verdean authorities into sending Saab to Venezuela.

A few years ago, the US media, aping Washington, expressed alarm that China might use its growing economic strength to assert “veto authority” over governments in Latin America (FAIR.org, 6/6/18). But Wilpert and Sammut (actual experts, not the “false Twitter accounts” that anonymous US official described to the Financial Times) expressed a much more urgent and reality-based concern–one that’s highlighted by Saab’s case:

Venezuela and other countries suffering from US aggression cannot wait for these world-historical shifts toward a more multi-polar world. The United States will also have to change from within.

US financial hegemony cannot end too soon, nor can the Western media’s casual acceptance of US brutality and criminality.