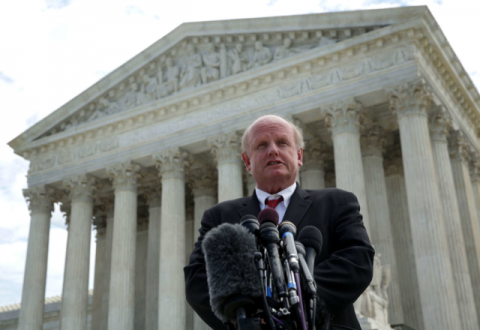 An attorney representing the Arizona Republican Party on Tuesday helpfully admitted outright what has long been obvious to observers of the GOP’s decades-long assault on the franchise: Easier voting makes it harder for Republicans to win elections.

Asked by right-wing Supreme Court Justice Amy Coney Barrett to explain the Arizona GOP’s interest in upholding a state law that disqualifies ballots cast in the wrong precinct — a restriction that voting rights advocates say discriminates against people of color, an assessment backed up last year by the Ninth Circuit Court of Appeals — Republican lawyer Michael Carvin responded that striking down the regulation would put “us at a competitive disadvantage relative to Democrats.”

Voting rights advocates and Democratic lawmakers welcomed the openness with which Carvin conceded the intent behind the Arizona law, one of two state regulations the conservative-dominated Supreme Court is set to rule on shortly — a decision that could have major nationwide implications as the GOP ramps up its voter suppression efforts across the country.

“I mean we all knew this, but didn’t think they would say it out loud,” tweeted Arizona state Rep. Reginald Bolding (D). “Today in the highest court in the land, an Arizona GOP attorney basically admitted Republicans want to suppress the vote because if they don’t it puts them ‘at a competitive disadvantage relative to Democrats.'”

“Republicans want to steal your right to vote and pulverize democracy because they don’t think they can win elections on ideas or humanity,” Pascrell said Tuesday.

Last January, the Ninth Circuit Court of Appeals invalidated an Arizona law banning on out-of-precinct (OOP) voting and restricting volunteers’ collection of early ballots on the grounds that “racial discrimination was a motivating factor in enacting” the regulations. The Arizona Republican Party appealed the ruling to the Supreme Court, which agreed to take up the case.

“One key reason for this disparity,” Stern explained, “is the state’s own crusade to shutter polling places following the Supreme Court’s 2013 decision in Shelby County v. Holder, which let Arizona change its voting laws without federal approval. Maricopa County, where more than 60 percent of Arizonans reside, slashed the number of polling places by 70 percent between 2012 and 2016.”

During oral arguments in the case on Tuesday, the Supreme Court’s conservative majority appeared ready to rule in favor of keeping the discriminatory restrictions in place, potentially spelling further disaster for the Voting Rights Act.

“In its most important voting rights case in almost a decade, the court for the first time considered how a crucial part of the Voting Rights Act of 1965 applies to voting restrictions that have a disproportionate impact on members of minority groups,” the New York Times reported. “Several members of the court’s conservative majority said the restrictions were sensible, commonplace, and at least partly endorsed by a bipartisan consensus reflected in a 2005 report signed by former President Jimmy Carter and James A. Baker III, who served as secretary of state under President George Bush.”

“I’m not sure they’re gonna go so far… just to say that the Voting Rights Act is completely eliminated,” said Berman, “but they might just interpret it in such a restrictive way that it’ll be functionally eliminated or reduced to so little protection for minority voters that they can’t really look to the courts for relief any more.”