Report: More than 24,000 Miles of IN Waters Unsafe for Recreation 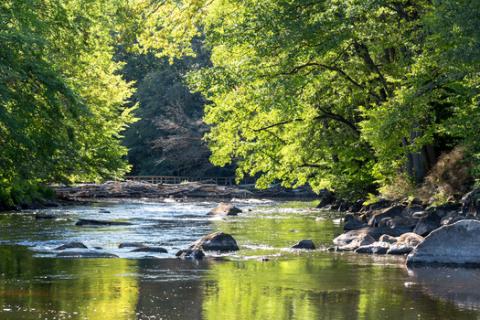 According to the Indiana Department of Environmental Management, E. coli is the number one cause of waterway impairment in the state. The organic pollutant is exacerbated and amplified by runoff from industrial farms. (Adobe Stock)

As the temperature gradually rises, many Hoosiers anxiously await their first beach trip of the year. But you may want to think twice before hopping headfirst into your favorite swimming spot. A new report by the Environmental Integrity Project finds more than 24,000 miles of Indiana's waterways aren't safe for human contact.

Indiana has more documented impaired rivers and streams than any other state, followed by Oregon, with nearly 18,000 miles. However, Tom Pelton, co-director of the Environmental Integrity Project, noted that the report only takes into account documented stream pollution.

"Indiana does a pretty good job of monitoring streams," he said, "and the more monitoring you do, the more pollution you find."

Pelton said Indiana is 11th in the nation for river and stream impairment when ranked by total percentage of assessed miles. In addition to the miles of impaired streams and rivers, the report noted that nearly 9,300 lake acres in the state are unsafe for human contact. The Indiana Department of Environmental Management offers beach closure notifications via its website, text and email.

The report said the bulk of Indiana's water pollution comes from agriculture, which occupies nearly 60% of the state's total land area. Pelton said the federal Clean Water Act allows Indiana to establish regulations on runoff from its more than 800 concentrated animal feeding operations.

"The Clean Water Act allows the state to impose rules on what you do with that manure, how closely you can put it to streams and how you dispose of it," he said. "States like Indiana really aren't doing that. They're not really strongly regulating this industrial-style animal production like they should."

Pelton said the state also should do more to encourage farmers to create runoff-filtering buffer zones, which include trees and natural vegetation between their land and adjacent waterways. At the federal level, he said the Biden administration should address staffing shortages at the Environmental Protection Agency to help control and monitor pollution.