Despite Defeat, Sanders Calls Those Behind Amazon Union Drive an 'Inspiration to Workers' Nationwide 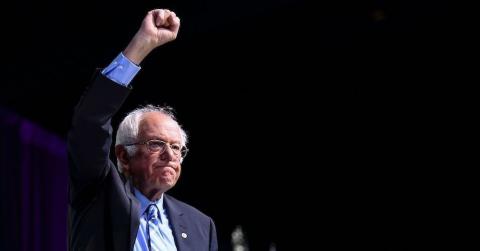 Although employees of an Amazon warehouse in Alabama ultimately voted against forming a union, Sen. Bernie Sanders on Friday called for reforming federal labor law as he applauded the efforts of organizers who took on the retail giant.

Sanders (I-Vt.) was an early backer of the unsuccessful union drive in Bessemer, and recently traveled to Alabama to stand in solidarity with the Amazon workers. At a rally in Birmingham, he praised organizers for serving as a source of inspiration to others nationwide—a message he reiterated Friday.

"At a time of mass income and wealth inequality, and when workers have very little power on the job, I applaud the pro-union Amazon workers in Alabama for their courage and willingness to stand up for workers' rights," Sanders said in a statement. "They have been an inspiration to workers all across the country."

In response to the initial tally from the National Labor Relations Board (NLRB) count—1,798 warehouse workers voted against the union compared with just 738 who voted for it—Sanders said, "I am disappointed but not surprised by the vote."

"It is extraordinarily courageous for workers to take on one of the world's wealthiest and most powerful corporations, a company that spent unlimited sums of money to defeat the organizing effort," he added. "It also appears that some of Amazon's anti-union efforts may have been in violation of NLRB law. And that is something that the union is addressing with the NLRB right now."

Echoing some of the RWDSU's critiques of Amazon's opposition to the union effort, Sanders said that "the fact that the company was able to force workers to attend closed door, anti-union meetings is just one reason as to why we need legislation that finally gives workers a fair chance to win organizing elections."

"Workers should not be intimidated or badgered by a company because they are exercising their constitutional right to form a union," the senator asserted.

Sanders was not the only lawmaker to celebrate the Amazon workers' efforts while calling for broader reforms.

"This election has made one thing abundantly clear, workers across the country need the Protecting the Right to Organize (PRO) Act," he added, referring to legislation that passed the House in March but has to pass the Senate, where Republicans can use the filibuster to block progressive bills.

"If the PRO Act was law, Amazon would not have gotten away with much of their union-busting tactics," Pocan said. "It is imperative that the Senate pass this integral piece of labor legislation."

"This vote is a stark reminder that the PRO Act must be prioritized and passed immediately," said Sciales. "The PRO Act would increase penalties for illegal intimidation and retaliation and other union-busting by companies like Amazon, while making it easier for more workers to join a union."

"The PRO Act is essential in our vision of a Green New Deal and a core part of Sunrise's Good Jobs for All campaign—for the federal government to guarantee meaningful work to all and ensure workplaces empower and protect workers," she continued.

If President Joe Biden and Congress "are serious about strengthening labor and uplifting everyday people," Sciales said, "they'll follow through on their promises and do everything in their power to pass the PRO Act immediately."