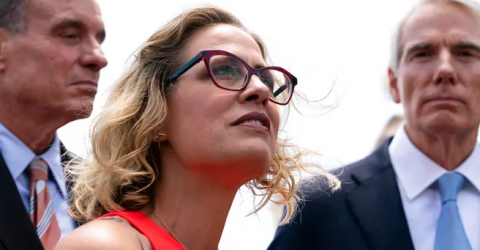 President Joe Biden’s agenda, once seemingly on life support after a small coterie of right-wing Democrats announced they’d oppose pairing a social spending bill with infrastructure legislation, has a new lease on life—thanks to progressive Democrats who held the line.

But you wouldn’t know that from corporate media, which disparaged attempts by left-leaning Democrats in Congress to stay the course on the two bills as the divisive behavior of fringe actors. “Take the win,” a frustrated and bemused Chris Cuomo (CNN, 9/30/21) told progressives.

Meanwhile, the obstructionists, who number less than a dozen in the House and Senate, are treated as the lawmakers with their ear to the ground, bold truth tellers who know what the American people really want. Corporate media values—bipartisanship, the “maverick” title, “moderation,” militarism and more—are regularly deployed to maintain the status quo. That they’re only regularly used to describe the actions of center-right and right-wing politicians shouldn’t be surprising. 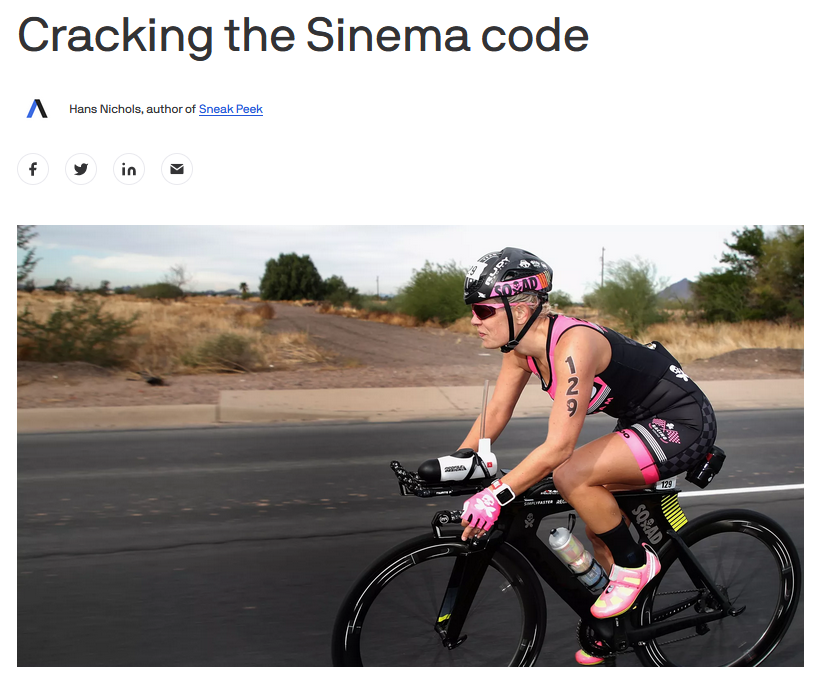 An Axios story (10/1/21) on Arizona Sen. Kyrsten Sinema began with “free advice for anyone trying to bully the wine-drinking triathlete into supporting President Biden’s $3.5 trillion budget bill: She doesn’t play by Washington’s rules—and she’s prepared to walk away.”

Chief among the impedimentary lawmakers receiving a spitshine on their image is Arizona Sen. Kyrsten Sinema. Perhaps the biggest roadblock to a deal, Sinema is portrayed in corporate media as a quirky, party-bucking, principled politician—rather than the reflexive obstructionist she’s proven to be in negotiations (Vanity Fair, 9/30/21).

That lack of purpose in talks with party leaders is paired with her cozying up to big corporate donors. As Sinema has stifled the social spending legislation, she’s reaped the benefits, taking in hundreds of thousands from the financial, insurance and real estate sectors, according to Open Secrets. She held a fundraiser on September 27 (New York Times, 9/27/21) with industry lobbyists opposed to the tax burden they fear would be a byproduct of the bill, and another high-dollar affair on October 2 with her PAC’s major donors (New York Times, 10/1/21).

When it comes to reworking Sinema’s image, Axios (10/1/21) has been one of the worst offenders, setting up the senator to readers as someone you might think has left-leaning politics, but doesn’t:

Progressives could be forgiven for presuming that Sinema, 45, the first openly bisexual member of Congress, who’s easy to spot in her trademark sleeveless dresses, wry wigs and acrylic glasses, would share their woke politics.

They’ve been befuddled, and increasingly enraged, when she behaves more like the late Republican Sen. John McCain, another Arizonan who didn’t mind challenging party orthodoxies. 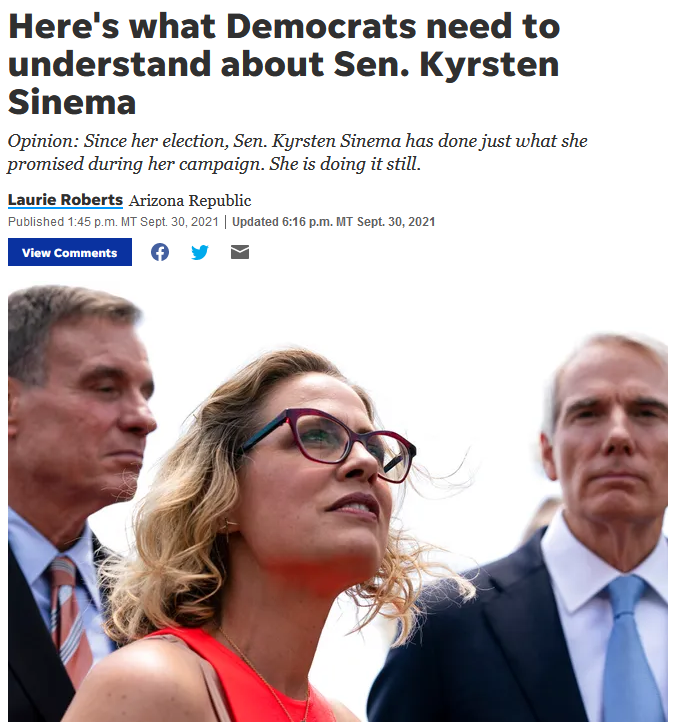 According to the Arizona Republic‘s Laurie Roberts (9/30/21), “Sinema’s brand is all about being a party unto her own.”

Gannett’s Arizona Republic (online as AZCentral), a conservative paper in Sinema’s home state, has argued in favor of the embattled senator even as her refusal to negotiate in real terms about what she wants frustrates Democratic colleagues. In an opinion piece aiming to recast Sinema’s aimless intransigence as evidence of her independence, columnist Laurie Roberts (9/30/21) claimed that by killing Biden’s agenda, Sinema was acting to save it:

She has charted a middle course, in search of solutions that have bipartisan support. Sort of like a certain president who now is pressing for the entire wish list of progressive proposals.

And Bill Maher, the increasingly right-leaning host of HBO’s Real Time (10/1/21), threw his support behind Sinema as well as West Virginia Sen. Joe Manchin, sneering that the two senators “might have their thumb more on the pulse on the average Democrat in the country” than the 95-member Congressional Progressive Caucus does.

Yet the average Democrat—and the average American—supports the full Biden agenda over just passing the infrastructure bill (USA Today, 8/25/21; Daily Beast, 9/16/21). The social spending legislation enjoys majority support of Americans, and doesn’t gain in popularity when it’s pared down (HuffPost, 8/18/21), as centrists have suggested.

The infrastructure bill is popular, too; the $1 trillion spending on roads, broadband and other essential infrastructure has strong support. But spending on expanding existing, popular programs that saw their stock rise during the uncertainty of the pandemic offers the public a different vision of the United States than has been given over the past five decades. The social spending bill is “poised to be the most far-reaching federal investment since FDR’s New Deal or LBJ’s Great Society,” as the Associated Press (9/15/21) put it.

Polling in Sinema’s Arizona shows that voters there have soured on the senator. She’s seen her popularity nosedive with independents and Democrats. A slight bump with Republicans won’t be enough to save her when she’s up for re-election if the numbers hold; GOP voters vote GOP. 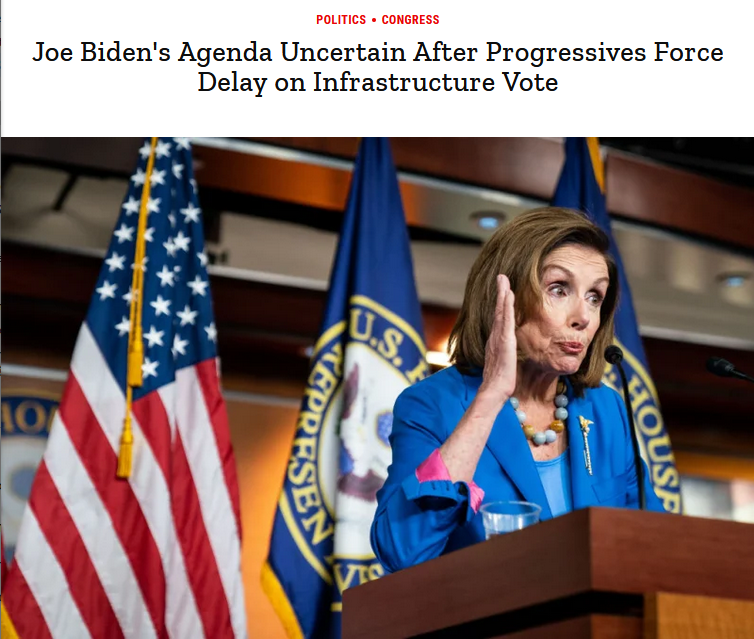 Nevertheless, the framing of the conflict between progressives and the president on the one side and a small group of center-right Democrats on the other consistently plays the former against one another, making the left-leaning caucus members appear unreasonable. Time (10/1/21) deployed just this tactic, characterizing progressives as hostage-taking zealots whose actions could “sink the bipartisan infrastructure bill.” Biden’s agenda was described as “uncertain” due to progressive resistance in the piece’s headline (“Joe Biden’s Agenda Uncertain After Progressives Force Delay on Infrastructure Vote”) and opening paragraphs; it’s only in the ninth paragraph, well down the page, that Time admitted that “the progressive position is in line with Biden’s agenda.”

By contrast, the New York Times‘ Jonathan Martin and Jonathan Weisman (10/4/21) described the small cohort of moderates threatening to hold up the bill in glowing terms, in an article ominously headlined, “Biden Throws In With Left, Leaving His Agenda in Doubt.” As Rep. Ilhan Omar communications director Jeremy Slevin noted, Martin and Weisman describe the nine right-wing Democrats threatening to torpedo the agenda in the House as “well-liked” members, who express their “hope” that the president can “bridge” the divide.

On the other hand, Omar and the other progressives working to support the Biden agenda are presented as stopping the infrastructure bill from going through—in one two-sentence paragraph, Martin and Weisman use “blockade” twice and “blockaders” once to describe the left-leaning members.

The spending bill’s price tag—$3.5 trillion—is frequently used in corporate media coverage as a catch-all for the omnibus bill. The New York Times has used the topline number in headlines repeatedly (8/23/21, 8/24/21, 9/9/21, 9/11/21, 9/18/21, to cite a smattering of examples), focusing perception of the bill primarily on its cost rather than its benefits.

It’s a clever rhetorical trick that obfuscates the purposes of social spending, and it’s notably not the approach corporate media take to military spending, which, if maintained at current levels, would amount to nearly $8 trillion over the same time period. And it’s not used for the infrastructure bill, which is instead primarily referred to as bipartisan, as though its concessions to Republicans (Washington Post, 6/3/21)—notably ruling out raising corporate taxes, after cutting the bill’s $2.2 trillion price tag in half—are a virtue.

Times reporter Weisman courted controversy at the end of September for his Twitter editorializing of the back and forth between the two sides, declaring it was time to take center-right Democratic Sen. Joe Manchin “at his word” and give up on moving the $3.5 trillion bill forward.

“The expansive social policy and climate bill once envisioned isn’t going to happen,” Weisman said. “Here’s what could. Look at extending temporary provisions in the American Rescue Plan with some climate to assuage progressives.”

The point of “climate,” of course, is not to “assuage progressives”—but to keep humanity from destroying the climate.