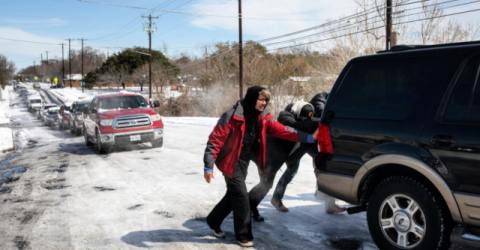 NYT coverage of the Texas Freeze separates cause and effect, lest readers understand that capitalism kills
Dorothee Benz 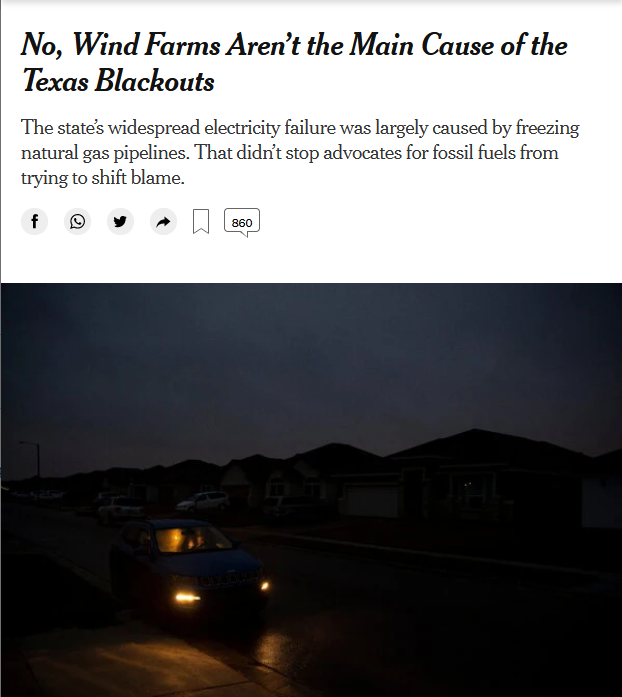 “No, Wind Farms Aren’t the Main Cause of the Texas Blackouts,” a New York Times headline (2/17/21) instructed readers three days after the extreme weather event that precipitated widespread infrastructure failures in the Lone Star State, failures that caused mass suffering and led to dozens of deaths. The article, by Dionne Searcey, appeared after Texas Gov. Greg Abbott was called out by Rep. Alexandria Ocasio-Cortez (among many others) for blaming renewable energy sources for the state’s power grid collapse.

Abbott, the Times accurately reported, was “among the most prominent in a chorus of political figures” blaming renewables for the blackouts. “The talking points,” it said, “reinvigorated a long-running campaign to claim that emissions-spewing fossil fuels are too valuable a resource to give up.” It went on to explain that wind power produces only some 7% of the state’s power, and that insufficiently weatherized infrastructure across energy sources was the real problem. “That didn’t stop some Republicans from targeting green energy as a chief culprit,” the Times intoned.

Yet two days earlier, the Times itself was doing the same thing. In a piece by Clifford Krauss and energy reporter Ivan Penn headlined “Frozen Turbines and Surging Demand Prompt Rolling Blackouts in Texas” (2/15/21), no other energy sources were explicitly mentioned as “part of” the problem, even though Texas’s small renewable energy sources actually outperformed forecasts during the crisis. It seems that fossil-fuel “talking points” influenced the paper of record, as well as Texas politicians. 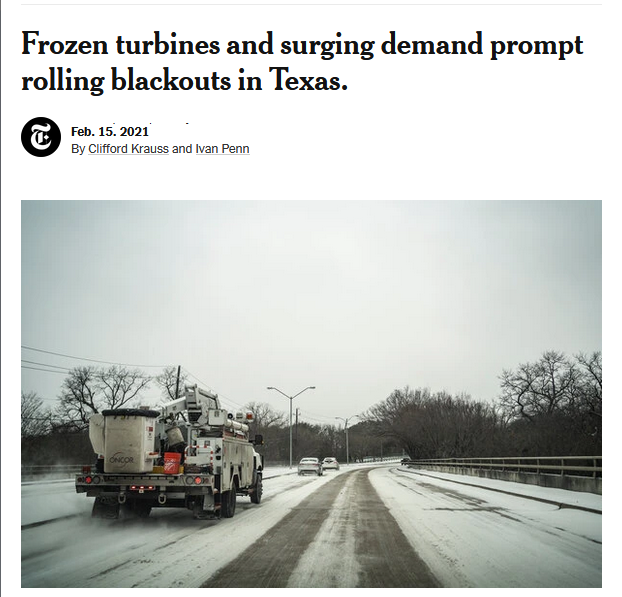 …but just a two days earlier, another piece in the Times (2/15/21) stressed that “part of the problem arose when wind turbines in West Texas became frozen.”

This pair of New York Times articles was illustrative of what I found when I looked at 45 articles the Times posted from February 15 to February 23. Early stories focused mostly on the impacts on people and businesses without much explicit analysis, though nonetheless inescapably suggested an analysis, one that tended to exculpate energy companies and their allies in the Texas government.

In “Winter Storm Disrupts Wide Swath of American Business,” for instance, the Times‘ Peter Eavis and Neal E. Boudette (2/16/21) reported that grid managers “have had to order rolling blackouts after many power plants were forced offline because of icy conditions and some could not get sufficient supplies of natural gas. Some wind turbines also shut down.”  This framing in effect blamed the weather rather than insufficiently weatherized infrastructure, and didn’t explain at all why natural gas supplies ran out. One additional sentence said, “At the same time, demand for electricity and natural gas has shot up because of the cold weather,” without adding that the extra demand was more than the grid could accommodate, thus prompting blackouts.

Rising anger and frustration at the infrastructure failures prompted the first Times piece (2/16/21) that gave more than a few lines to the question of why Texas’s electric grid failed. It, too, started by reflexively blaming the weather: “As a winter storm forced the state’s power grid to the brink of collapse….” 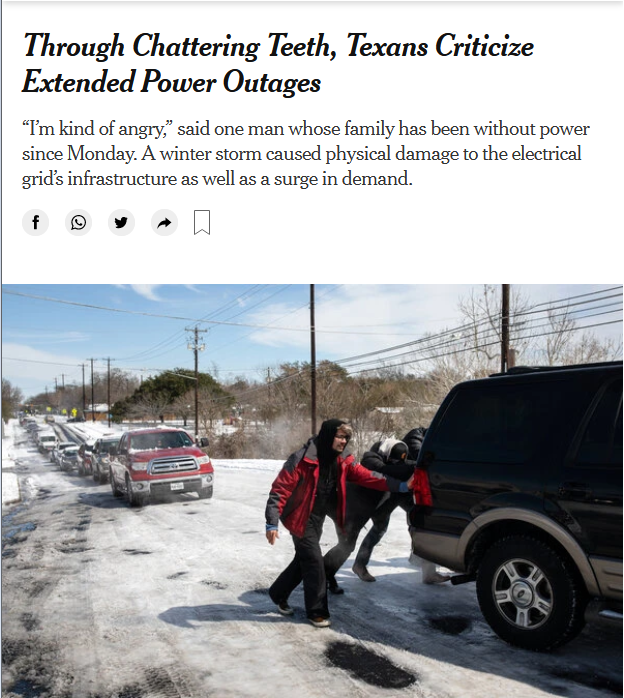 This New York Times article (2/16/21) failed to examine the claim that “the state’s energy market has functioned as it was designed.”

But then the Times cited a counterpoint from the Harvard Kennedy School economist who designed the Texas energy market, and abandoned analysis by simply reporting a “he said, he said” argument. According to this William Hogan, “the state’s energy market has functioned as it was designed”:

That design relies on basic economics: When electricity demand increases, so too does the price for power. The higher prices force consumers to reduce energy use to prevent cascading failures of power plants that could leave the entire state in the dark, while encouraging power plants to generate more electricity.

Is it too much to ask that the paper of record itself assess whether supply shortages, days-long blackouts, lack of potable water, and people freezing to death in their homes is a systemic failure or a system functioning as designed?

The New York Times shrugged off this responsibility, noting simply that “the rules of economics offered little comfort” to those stuck without power.

“The steep electric bills in Texas are in part a result of the state’s uniquely unregulated energy market,” the Times (2/20/21) explained in “His Lights Stayed on During Texas’ Storm. Now He Owes $16,752.”  This article, by Giulia McDonnell Nieto del Rio, Nicholas Bogel-Burroughs and (again) Ivan Penn, went on to repeat the same point/counterpoint, from the same sources, as the earlier one, quoting William Hogan saying, “As you get closer and closer to the bare minimum, these prices get higher and higher, which is what you want.”

But again, there’s no engagement with this view. Just another shrug about a woman who gave in to the rules of economics and said: “I finally decided the other day, if we were going to pay these high prices, we weren’t going to freeze. So I cranked [the thermostat] up to 65.” 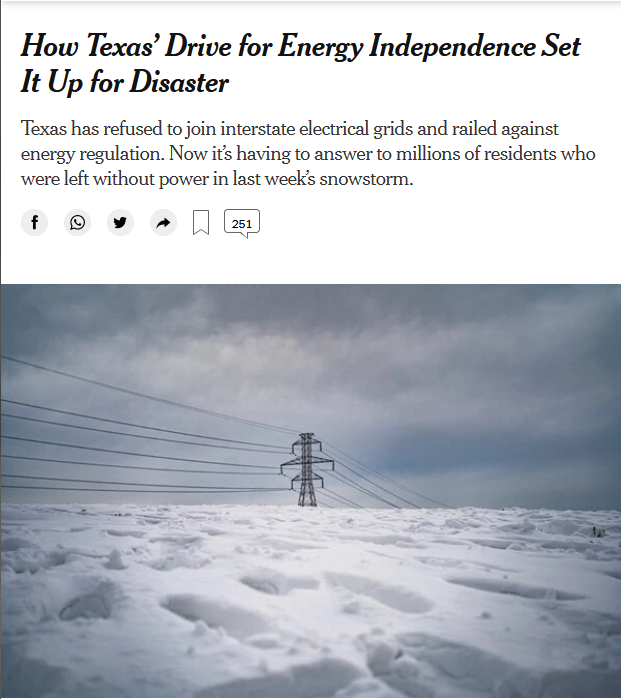 Was it “energy independence” that Texas proponents of deregulation sought, as this New York Times headline (2/21/21) suggests—or higher profits for energy companies?

It was not until a week after the storm that the New York Times (2/21/21) ran a piece on the grid failure itself, “How Texas’ Drive for Energy Independence Set It Up for Disaster,” wherein “energy independence” should really be spelled “market fundamentalism.” The piece, credited to Clifford Krauss, Manny Fernandez, Ivan Penn and Rick Rojas, traced the current problems back to the 1999 decision to radically deregulate the Texas energy market.

“The energy industry wanted it. The people wanted it. Both parties supported it,” the Times said about that decision. It went on to say that the “prediction of lower-cost power generally came true.” No “experts argue that,” no citation; just flat-out statement of fact.

But it’s not true. A Wall Street Journal investigation (2/24/21) demonstrated this week that deregulation raised prices, not lowered them:

Those deregulated Texas residential consumers paid $28 billion more for their power since 2004 than they would have paid at the rates charged to the customers of the state’s traditional utilities.

It seems the New York Times just took the benefits of deregulation on free-market faith rather than factchecking it.

In addition to the (nonexistent) cost savings, the Times said in the same February 21 piece, “the newly deregulated system came with few safeguards and even fewer enforced rules.” “With so many cost-conscious utilities competing for budget-shopping consumers, there was little financial incentive to invest in weather protection and maintenance,” it explained:

With no [reserves] mandate, there is little incentive to invest in precautions for events, such as a Southern snowstorm, that are rare. Any company that took such precautions would put itself at a competitive disadvantage.

Dressed in the antiseptic language of economics—“little incentive to invest”—this article tries hard not to say what it is saying: that the free market cannot provide social goods. That is, absent non-market intervention (i.e., regulation), for-profit utilities simply will not develop the kind of infrastructure that is needed to address human needs that are required for survival. 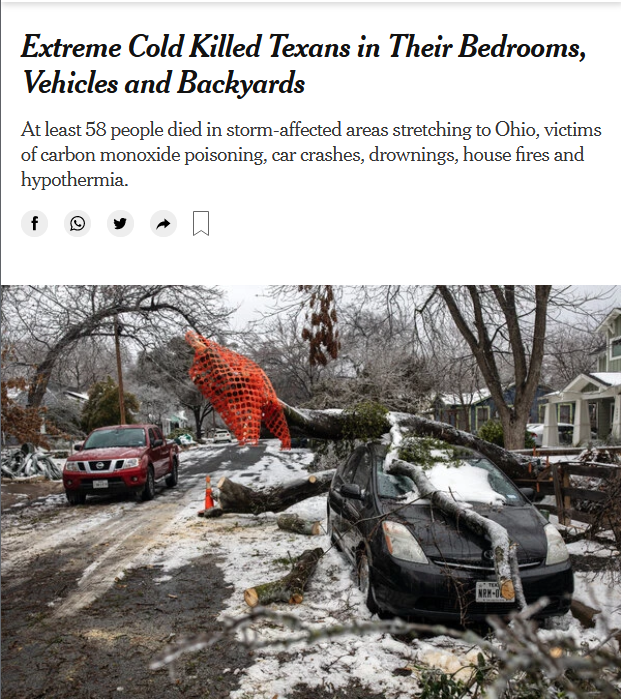 This New York Times article (2/19/21) blames deaths in the freeze on “poverty, desperation and…a lack of understanding of cold-weather safety”—not on the “state’s energy market [that] functioned as it was designed.”

Texans have paid a steep price, not just in electric bills, but in suffering and lives lost, as a direct consequence of the market dogmatism that undergirds their energy system. But the way the New York Times covered the crisis obscured rather than illuminated that. Articles on the crisis that detailed the suffering and losses have avoided analysis of the causes, and articles explaining the systemic failure (such as they are) don’t delve into the human cost.

“Extreme Cold Killed Texans in Their Bedrooms, Vehicles and Backyards” (2/19/21), by Giulia McDonnell Nieto del Rio, Richard Fausset and Johnny Diaz, for instance, painted a grim picture and includes heartbreaking stories. As for analysis, this is all there was: “Coming into clearer view were the dimensions of a public health crisis exacerbated by poverty, desperation and, in some cases, a lack of understanding of cold-weather safety.” No mention of the market functioning as it was designed to, or explanation of the relationship between deregulation and the inability of the electric grid to withstand an extreme weather event of this sort. Just blaming poverty (itself a systemic failure) and the poor, who don’t spend time skiing in Aspen and therefore aren’t familiar with “cold-weather safety.”

Keeping the causes and effects of the Texas Freeze crisis in separate articles lessens the chance that readers will feel the full weight of the reality that capitalism kills. William Hogan is in fact right: The system is functioning as it was designed to. And that’s the problem. Just don’t expect the New York Times to help anyone realize it.