"We Are Emptying Out Their Shelves": Nabisco Workers’ 5-Week Strike Won by Shutting Down Business as Usual 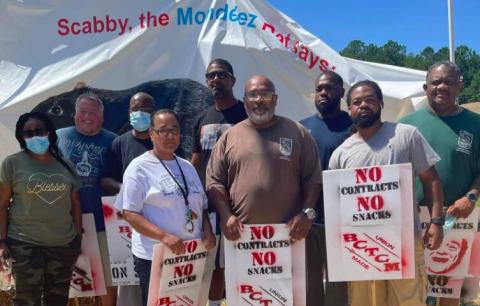 A beaten-down workforce took on a powerful company—and won.

CHICAGO — His shift on the strike line over, James Walsh lingers on the sidewalk to wave his picket sign amid a deafening racket of passing truckers and drivers hammering their horns in support.

“I think we got a chance,” Walsh said last week. ​“We are emptying out their shelves,” he added optimistically.

Nearly four decades ago, Walsh went to work at what was once the world’s largest bakery, Nabisco (now a subsidiary of Mondelēz International). He was just a teenager when he got the job, which also got him a lifetime of something that has nearly disappeared across the nation — a union job with good pay and good benefits. Indeed, his union — the Bakery, Confectionery, Tobacco Workers and Grain Millers International Union (BCTGM) — has proven up to the challenge to keep those benefits.

A five-week strike by 1,000 of the union’s members at Mondelēz came to an end with workers approving a new, four-year contract on Saturday, September 18.

The victory is ​“huge” according to Donald Woods, president of BCTGM Local 1 in Chicago and one of the union’s negotiators. ​“The union wanted to maintain what we had — we didn’t lose nothing,” he says. He adds that, of the 893 workers who voted nationally, only 201 were against the deal.

Instead of the company’s demand for rotating 12-hour, three-to-four-day shifts for workers on high demand sites, Mondelēz has agreed to create weekend shifts, solving the company’s need to meet production demand, Woods says. More importantly, the schedule allows workers to keep their overtime pay for holidays and weekends — benefits that would have vanished with three-day shifts. If current workers do not volunteer for the weekend shifts, the company will hire new employees, Woods says.

Mondelēz also lost its bid to require new hires to pay a share of their healthcare costs, Woods says. (Mondelēz currently pays 95% of union members’ healthcare coverage.) As only the second strike in Nabisco’s history, Woods is hopeful the company has learned a lesson. ​“My experience with the company, [when it] goes through a labor dispute, is that they don’t want to do it again,” Woods adds.

Without a doubt, the moment marks a comeback for BCTGM. Mondelēz handed the union a painful drubbing over the past five years — starting in 2016, when Mondelēz began shifting jobs from Chicago to a new factory in Salinas, Mexico, then halted its pension plan in favor of a 401(k), saying the union’s failing multiemployer pension plan was headed toward collapse. (Earlier this year, Congress voted to stabilize a large number of troubled multiemployer plans.)

BCTGM tried to retaliate with a boycott of Mexican-made Mondelēz products and stirred an organizing drive among Mexican unions at the Mondelēz plant in Mexico, aiming to overturn the company-run, pro-industry union there. But the efforts came to no avail.

But this new showdown serves as a reminder for organized labor that strikes do work — despite the ominous national decline in the number of major labor disputes (involving 1,000 or more workers) in 2020, which fell to just eight, the third-lowest since the Bureau of Labor Statistics began keeping track in 1947.

It’s also proof that strikes work best when an employer can’t do business as usual — a lesson also illustrated by the Teamsters’ victory with UPS in 1997.

It’s also a lesson on the value of community solidarity with labor. BCTGM officials in Chicago and elsewhere had support from other unions in observing their picket lines and showing up. The strike touched a wider mood, picking up news coverage and support from non-union groups. For example, players from the Portland Thorns, part of the National Women’s Soccer League, showed up on the Nabisco picket line in Portland.

Quite significantly, the strike reveals the corrosive energy that comes when a workforce feels beaten down. Despite assurances from the global giant about the limitations of its contract demands, Walsh and others on the picket line had little faith that Mondelēz would keep its word. ​“They want more and more, and finally it just got old,” Walsh told me on a steamy afternoon, a strong wind carrying the sweet smell of baking from the plant.

The company put a positive spin on the strike and settlement and, in response to a request from In These Times, cited a news release stating that the terms in the four-year contracts ​“represent a significant step forward for both the company and its employees.”

Mondelēz can force workers to put in 16-hour shifts, but the new weekend shift prevents the need for consecutive overtime hours into the weekend, according to Woods.

One major fear on strikers’ minds was that Mondelēz would continue shifting more jobs to Mexico, a situation that Mondelēz said would not happen this time. But the closing of long-term plants in New Jersey and Georgia this year — wiping out 1,000 jobs — along with the closing of several plants over the past decade, is still a deep worry. The union’s membership at Mondelēz has fallen dramatically, from 4,000 members in 2016 to 1,500 members today.

Mondelēz’s effort to cut its labor costs also didn’t sit well with the strikers, who saw the company’s finances doing quite well throughout the pandemic. The company’s net income for the first six months of the year was up nearly 60% over 2020 numbers. Mondelēz CEO Dirk Van de Put also received $16.8 million in total compensation in 2020, a 12% hike since 2018. That gives him 544 times the median salary of a Mondelēz worker.

The labor disruptions did come as somewhat of a surprise since Mondelēz officials had seemed confident, saying they had contingency plans on hand for a strike and that production had continued, but ​“not to the same level,” as the strike lengthened. The company had quickly hired the firm Huffmaster to guard its plants and hire strikebreakers to run the facilities, and canceled the healthcare coverage of striking workers.

Lots of manufacturers lately ​“are trying to undo a lot of gains labor has made for decades,” Cummings says. ​“And if they push that agenda, who is the next generation that comes to work in these facilities?”

Asked why the union took on the company now instead of 2016 — when it suffered a major confrontation with Mondelēz — Woods echoed the mood on the picket line.

“It was, ​‘Enough is enough,’“ Woods says. “[The workers thought] if they didn’t stand up now, they would be working minimum wages. So they had to stand up and fight.”

Stephen Franklin is a former labor and workplace reporter for the Chicago Tribune, was until recently the ethnic media project director with Public Narrative in Chicago. He is the author of Three Strikes: Labor’s Heartland Losses and What They Mean for Working Americans (2002), and has reported throughout the United States and the Middle East.