Ocasio-Cortez says we need World War II-scale action on climate. Here’s what that looks like. 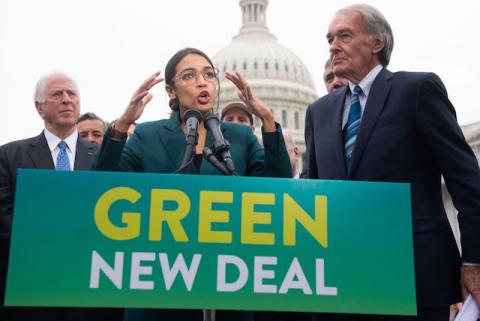 Winning WWII wasn’t socialism. Neither is the Green New Deal.

The world’s leading climate scientists agree. In 2015, for instance, they called for a sweeping mobilization — “a radical transition (deep decarbonization now and going forward),” as they described it — to avoid catastrophic impacts of climate change. And last October, the world’s nations unanimously agreed with our top scientists that preserving a livable climate requires “system changes” across the economy that “are unprecedented in terms of scale.”

Judging by their initial reactions to the Green New Deal resolution, President Donald Trump, Republican leaders, and other longtime opponents of climate action seem to have decided that the best way to block such an economy-wide mobilization is to try to paint it as “socialism.” On Friday, Sen. Tom Cotton (R-AR) went so far as to claim the Green New Deal begins with “socialism” but “ends with the Gestapo.” Major media outlets, like Axios, have already begun parroting the GOP line of attack.