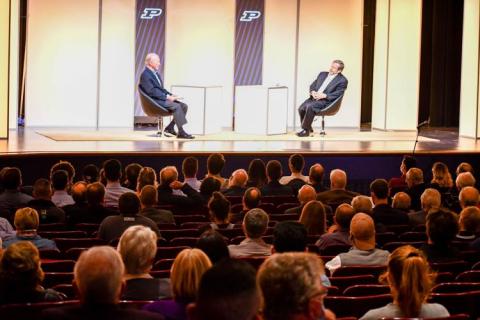 Purdue President Mitch Daniels and guest Steve Koonin have a conversation about the influence of media and politics on the urgency of climate change action.

President Daniels published an opinion lauding Dr. Steven Koonin in the Washington Post on Oct. 12, which accompanied his inviting of Dr. Koonin to present a Presidential Lecture on Oct. 19 at Purdue University.

Daniels waxes poetic about Dr. Koonin as a scientific “contrarian”, lauding his scientific credentials as “impeccable,” including his position as chief scientist for BP (formerly British Petroleum), and he claims that his irreverence for scientific consensus makes him courageous and filled with scientific morality. President Daniels suggests that Dr. Koonin’s courage is a needed salve for a politicized scientific community riddled with a shameful disregard for “truth.” He frames the rebuttal of Dr. Koonin’s perspectives by the scientific community, not as evidence of science at work, but as “name-calling” and “calumny.” He concludes, “As vital as identifying the best climate strategy is, a broader issue involves the willingness of scientists, and the citizens who seek their advice, to tolerate — and maybe even welcome — the dissident who has the courage to speak the truth as he sees it to the powers of his age.”

Here, Daniels misses a crucial point. He positions Koonin’s right to say what he likes irrespective of scientific consensus as an issue of scientific integrity. However, he overlooks the fact that he himself is not one of Koonin’s peers, and is without the credentials and expertise to judge such scientific claims. Daniels compounded this misjudgment by inviting Dr. Koonin to present a Presidential Lecture at Purdue over the objections of renowned climate scientists, including those at Purdue itsel

Providing a scientist who makes claims deemed fringe by peer experts in the field access to a megaphone under the guise of a free and fair exchange of ideas, when one oneself is not qualified to judge the merit of the argument, isn’t courageous, nor is it critical to saving the future of science.

Instead, it feeds public disinformation. In the case of Koonin’s lecture, it wasn’t scientists hearing his arguments on an even footing to judge them, but students and the public, and with no counter-voices to represent the scientific consensus about the climate crisis.

If President Daniels had really wanted to advance a healthy debate on Dr. Koonin’s argument’s merits for the sake of science, then he could have invited any number of climate science experts present on his own campus, whose scholarship has been deemed credible by their peers in the scientific community through carefully crafted publications in peer-reviewed journals, to join in.

But he didn’t. Because this wasn’t about providing some hard-working, under-appreciated scientist doing research in some underfunded back room a platform to share novel insights with a distracted scientific community. It was about providing the former chief scientist of a global oil company who already has a national book contract with the legitimacy of a presidential lectureship at a research university in order to advance climate crisis skepticism. President Daniels might as well have invited flat-earthers to campus to stir up the scientific community in the interests of contrarianism. But there’s no industry with deep pockets and lobbying budgets to benefit from the agenda of flat-earthers.

Academic freedom, one of the core tenets of American higher education and a core part of the mission of the American Association of University Professors, is not the right to say what one likes on a college campus. It is the right for research to be judged by the standards of their field, not by politicians or university presidents. By giving Dr. Koonin the podium at Purdue, President Daniels subverted the very practices that science uses for its own growth and improvement, while claiming to do so in the name of saving science.