When Police Dogs Attack: Why Some K-9 Units Are Under Fire for Biting Suspects 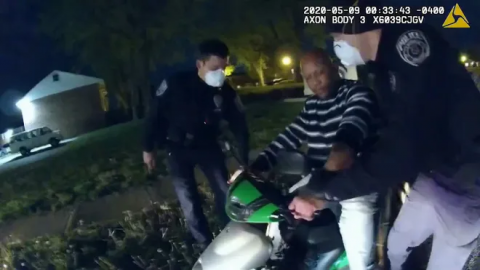 Several biting incidents are raising criticism about the practice of unleashing police dogs on suspects. Inside Edition spoke to two men who say they were left badly scared after police K-9 handlers unleashed their dogs on them.

Police dogs are trained to attack at a moment’s notice and can run down suspects in a matter of seconds, making K-9 units an important tool for police departments across the country.

Wearing a special protective suit, professional dog trainers Josh Jacobson and Mike D'Abruzzo from Fearless K9 put on a demonstration to show Inside Edition's chief investigative correspondent Lisa Guerrero how serious bites can be when some police dogs attack.

"If you weren't in this suit, what would have happened to your arm just now," Guerrero asked.

"Probably with a dog of that size, he probably would have broken my forearm,” said Johnson, who allowed a trained dog to attack him while in a special bite suit.

But some police departments are coming under fire for how they have utilized some of their four-legged members.

In Salt Lake City, police were responding to a domestic violence call when Jeffrey Ryans says the dog clamped down on his leg for 30 agonizing seconds.

Ryans says he was already on his knees with his hands in the air when a police officer ordered his dog to attack. He showed Inside Edition the scars left behind where the dog bit him on his leg.

The officer involved in the incident was arrested and charged with aggravated assault. He has denied any wrongdoing

And Richard Bailey says he is lucky to be alive after police officers in Lafayette, Indiana, ordered their dog to attack him.

The officers were responding to a 911 call about a man allegedly drinking and attacking three people, but Bailey's attorney Fatima Johnson says her client was already on the ground with his hands behind his back when the dog was unleashed.

The dog can be seen gnawing on Bailey’s neck in disturbing bodycam video of the incident.

“He doesn’t have a chance to defend himself, to protect himself, and for 37 seconds, they let that happen. They let that dog rip at his throat,” Johnson said.

The officers were cleared of any wrongdoing by a special prosecutor, and the chief of police says Bailey was resisting arrest.

But nowhere has the problem been as bad as Indianapolis, where police have been accused of unleashing their dogs on dozens of unarmed suspects, many of whom are involved in low-level crimes like shoplifting or driving without a license.

A Pulitzer Prize-winning investigation by the Indianapolis Star exposed how police dogs in the city had bitten more than 240 suspects in a 3-year period from 2017 to 2019. That’s more bites than units from 11 other major cities combined.

“Why have so many people been bitten by police dogs here, more than in any other police department in the country?” Guerrero asked.

Another officer interrupted, saying the question was a “false narrative,” before Taylor walked into a city council meeting.

The Indianapolis Police Department says their officers have acted within the law and credits their K-9 unit for capturing dangerous criminals. They say they plan on reforming policies, including no longer deploying dogs on suspects in misdemeanor cases.