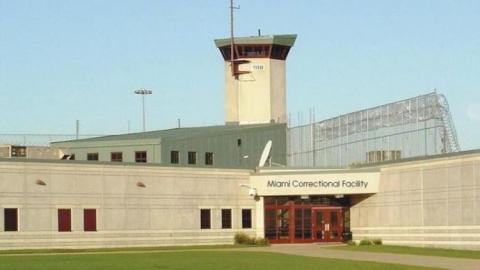 10 prisoners allege they were held in darkness, shocked by dangling live wires

BUNKER HILL — Four more inmates at Miami Correctional Facility are suing the prison alleging they were subjected to brutal conditions while being held in isolation units, including one inmate being forced to use a plastic bag as a toilet for five days.

Trevor O’Neal, Nalakeio Bennett, Latroy Maxwell and Charles Rodgers on Tuesday joined six other inmates who filed lawsuits last month against the prison, which they say “deliberately ignored the horrific conditions in which they were held.”

The lawsuits were all filed by the American Civil Liberties Union of Indiana on behalf of the inmates.

In the grievances, the inmates said they were placed in isolation cells inside the restrictive housing unit, where prison officials had covered broken outside windows with sheet metal and never replaced or repaired the single light inside the cell.

The lawsuits assert that led to the inmates living in sometimes pitch-black conditions and being shocked by live wires that hung from the broken light fixture. Other windows were never replaced, exposing some prisoners to rain, snow and cold for weeks.

In the lawsuit filed by Bennet, the inmate asserts he had been stabbed just before he was moved into restrictive housing, and he frequently hit parts of his cell in the dark, causing his stab wound to reopen and bleed. In response, prison staff gave him bandages, according to the complaint.

O’Neal said in his lawsuit that he was also held in a cell in total darkness and received shocks from the live wires in the ceiling before he was transferred to another isolation unit. In that cell, the toilet was clogged by another inmate’s feces, creating a smell that was “overpowering and revolting,” the complaint says.

O’Neal immediately complained to a number of persons about the toilet, but officials refused to take the steps necessary to fix the toilet and refused to allow him to be placed into a cell with a working toilet, according to the lawsuit.

Instead, O’Neal was given a plastic bag into which he was required to both urinate and defecate for five days until maintenance was finally called and quickly fixed the toilet, the lawsuit alleges.

Rogers said in his lawsuit that he also lived in nearly total darkness inside one of the cells, in which the emergency call button didn’t work to notify staff of any medical or other emergencies.

On a number of occasions, Rodgers was forced to beat on the door to attract medical attention when he suffered from shortness of breath, according to the complaint.

Kenneth Falk, legal director of the ACLU of Indiana, said that the 8th Amendment requires inmates must receive “minimal civilized measures of life’s necessities” that Miami Correctional failed to meet.

The lawsuits assert the prison continually ignored complaints about the living conditions in the cells or calls to make basic repairs, pointing to a pattern of cruel and unusual punishment practiced inside the facility’s restrictive housing unit.

“Horrifying stories that continue to emerge from Miami Correctional Facility’s isolation unit shock the conscience and violate the Constitution,” Falk said in a release. “In case after case, prison officials subjected these men to brutal conditions no human being should ever experience — knowing full well the pain and trauma they were inflicting.”

The Indiana Department of Correction said in an email it does not comment on active litigation.

Carson Gerber can be reached at 765-854-6739, carson.gerber@kokomotribune.com or on Twitter @carsongerber1.