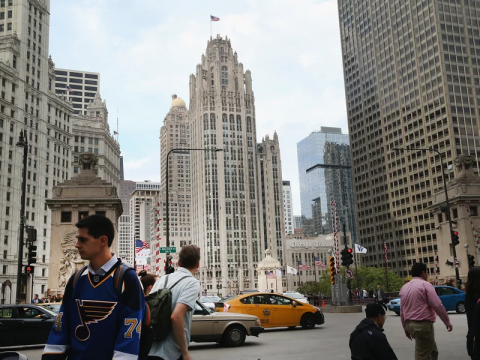 The Tribune Tower, the iconic former home of the Chicago Tribune, seen in Chicago, Illinois in 2015. The newspaper lost a quarter of its staff to buyouts after it was acquired by Alden Global Capital in May.

Have you heard of the hedge fund Alden Global Capital?

If you're a reader of local newspapers — particularly the Chicago Tribune, The Baltimore Sun or New York Daily News — you're going to want to make sure the answer is yes. That's because the fund is stepping in to buy — and then gut — newsrooms across the country

And that has consequences for democracy, as journalist McKay Coppins writes in The Atlantic. Below are highlights from his conversation with Morning Edition's A Martínez.

NPR reached out to Alden for a response. A spokesman took issue with the entirety of the story, and laid out a long list of questions attacking the integrity of the reporter, The Atlantic and some of his sources without addressing some of the more specific claims within the report.

As newspapers vanish, so does civic engagement

Research shows that when local newspapers disappear or are dramatically gutted, communities tend to see lower voter turnout, increased polarization, a general erosion of civic engagement and an environment in which misinformation and conspiracy theories can spread more easily.

Coppins notes that there's even some research indicating that city budgets increase as a result, because corruption and dysfunction can take hold without a newspaper to hold powerful people to account.

"A lot of cities almost operate with the assumption that there will be at least one local newspaper, in some cases several local newspapers, acting as a check on the authorities," he says. "And what we've seen in a lot of these places where newspapers have been scaled back or even closed is there really is no comparable product in place, whether it's by the government or by another news organization, to do what these local newspapers have done for hundreds of years."

What does Alden see in the news industry, which isn't known for being particularly lucrative?

Coppins describes Alden as a specific type of firm: a "vulture hedge fund." It has figured out how to make a profit by driving newspapers into the ground, he says, since Alden's aim is not to make them into long-term sustainable businesses but rather maximize profits quickly to show it has made a winning investment.

Some of these papers likely would have been liquidated if the fund had not stepped in to buy them, as Alden's president told Coppins. But that's not true for all of them.

The Tribune Company (which owns the newspapers mentioned above) was still turning a profit when Alden bought it, but the hedge fund immediately offered aggressive rounds of buyouts and shrunk its newsrooms in the name of increasing profit margins.

He says he visited the Tribune's office and was "really shocked by how grim the scene was." It's traded in a prestigious downtown newsroom for a "Chipotle-sized office" near the printing press.

A quarter of the newsroom (including many big-name reporters, columnists and photographers) took the buyouts Alden offered, and while some great reporters remain on staff, it's nearly impossible for them to fill those gaps, Coppins says.

Meanwhile, in Vallejo, John Glidden went from covering crime and community news to holding the title of the only hard news reporter in town, filling a legal pad with tips he knew he'd never have time to pursue. He was fired after criticizing Alden in a Washington Post interview.

What does the future of local newspapers hold?

A recent Financial Times analysis found that half of all daily newspapers in the U.S. are controlled by financial firms, and Coppins says that number is all but certain to keep growing.

"The question is, will local communities decide that this is an important issue, that it's worth saving these newspapers, protecting them from firms like Alden, or will they decide that they don't really care?" he asks.

Some people believe that local newspapers will eventually be replaced by new publications, which Coppins describes as "built from the ground-up for the digital era." That may well be the future of local news, he says. But in the meantime, there isn't really anything that can fill the hole these newspapers will leave if they're shut down.