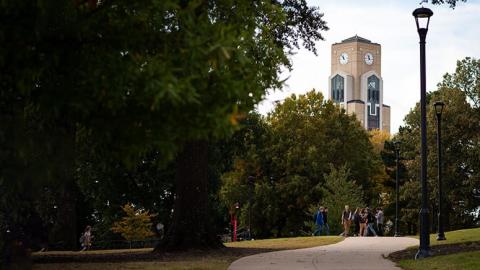 Black fraternities and sororities at Arkansas State University were targeted in racist attacks online this week—but students say the posts are just part of a much larger problem on campus.

“On behalf of the entire Arkansas State University community, I condemn the recent statements of anonymous individuals,” Chancellor Kelly Damphousse wrote in a statement released Thursday. “The language and labels used by persons posting about the weekly [National Pan-Hellenic Council] events on campus is simply unacceptable and disgraceful… The type of statements made recently related to Black students and members of NPHC organizations are shameful and unwelcome at Arkansas State University.”

KAIT 8 ABC reported that anonymous messages were posted on Wednesday night to the social media platform Yik Yak, which serves as a community-discussion site for users within a 5-mile radius. The posts reportedly targeted the nine National Pan-Hellenic Council Greek organizations, which historically center around the culture of the African diaspora. According to the Arkansas State University chapter of the NPHC, statements were made telling Black students to “get back on the boat” and that “Black is a disease.”

In a statement posted to Instagram, the university chapter of the NPHC condemned the “hostility” and “belittlement” directed toward Black students.

“Not only is it shameful and discouraging to see our peers using an anonymous app to shame and belittle us, but it is also a mockery of our traditions and history behind our organizations,” the NPHC posted on its Instagram page. “For so long, minority students have been unable to feel comfortable on their college campus[es], and this is a prime example. As a student body, we are to exemplify unity and understanding for EVERY student—no matter their race or ethnic background.”

The post ended by calling on all students to work together and specifically urging white students to unite with their classmates of color.

“It’s so disappointing to witness when stuff like this happens,” one student wrote under the post. “They’re not random people but the students who we sit beside… in classes.”

“Extremely disappointed by the evident trolling and racism displayed by a person or individual on the internet,” another student commented. “I know this doesn’t reflect the entire Arkansas State University values, but I appreciate the Black organizations coming together to discuss the racism and hardship we face while being at a [predominantly white institution].”

As reported by The Guardian, Yik Yak has previously been under fire for its lack of accountability with its user base.

“Notorious in the past for anonymous bullying and harassment, this social media platform has returned to university campuses across America in the last year with the same terrible and irresponsible results of its previous version,” Chancellor Damphousse wrote in her statement. “As screen shots of the comments are posted elsewhere, we want to remind everyone of the unaccountable cyberbullying the platform encourages.”

The social media site did not immediately return The Daily Beast’s request for comment Friday.

Smith said the anonymous nature of the platform can be frustrating and messy, especially when officials are trying to get to the bottom of who created the posts.

“Yik Yak is… an anonymous app with anonymous owners. And it’s geo-based. So, you can only see [posts] within 5 miles of you,” Smith said. “So, you can see where it becomes fairly fertile ground for derogatory comments of all types… and it’s not necessarily that you have to be a student in high school or college or a member of that community. You can just be driving through it and make that comment. Now, a lot of students use it to be gossip-y and share their opinions. Unfortunately, sometimes those opinions go way too far.”

But students say racism at the university isn’t simply restricted to online forums.

“This isn’t the first time an incident like this has occurred at this university,” a student-athlete posted on Instagram. “It gets swept under the rug, but I’m suppose[d] to go back and recruit other African Americans to attend this university and lie to their face and tell them that they aren’t just another diversity number here? That the university cares about them?”

In a shocking display of racism, a Black student at Arkansas State University was interrupted during an interview with KAIT 8 ABC on Thursday with students yelling “white power” as they drove by.

“It’s things like that which make me just disappointed,” the student, Orion Hulsey, told the news outlet after it happened. “No one should ever walk around their college campus and hear that.”

Smith said the student body has persevered despite the racism. After the Yik Yak messages went public, the NPHC held an additional rally held to show pride and support for Black students.

“It was well received… I would not want to speak for our students of color because, as a white staff member, I can’t speak for them. But I do get the sense that that was an important moment,” he said. “There was a lot of support shown to them by other students, students [who] are not students of color. They were doing their best to make clear that they were welcome and they were loved and they were a part of our A-State community.”