LIES AND WAR: From Truman to Rumsfeld and Beyond

Post-modernists talk about “discourses,” “narratives,” “tropes,” and verbal “deconstructions.” They should be commended for suggesting how words are used to mobilize, inspire, deceive, promote self-interest, and, too often, justify killing everywhere. Former Arkansas Senator, J. William Fulbright in describing how he was tricked by his old friend President Lyndon Baines Johnson to support a resolution authorizing escalating war in Vietnam said: “A lie is a lie. There is no other way to put it.”

The story can begin any time. As World War Two was ending, the Greek government constructed by Great Britain after the Nazis were defeated sought to crush a rebellion by activists who objected to their newly imposed rulers. The Greek rebels included former anti-fascists freedom fighters, some of whom were Communists or Socialists. The British, no longer able to support the repression of the Greek Left in what was a civil war, called on the Americans for help.

In February,1947, Truman foreign policy advisers met to discuss what to do about the Greek civil war and the threat of “Communism” spreading along the Mediterranean. The Republican Chair of the Senate Foreign Relations Committee, Arthur Vandenberg, attending the meeting. said he would support U.S. military and economic aid for the unpopular Greek government. But, he said, tell the President he better “scare hell out of the American people.”

One month later, President Truman gave his famous Truman Doctrine speech to the Congress and the American people. He warned the American people, who until that time still had positive feelings toward the Soviet people, that the United States and the “free world” were going to be engaged in a long-term struggle against the forces of “international communism.” The Truman Doctrine was not about nations and movements with different interests and ideologies but rather a global struggle between the forces of good threatened by the forces of evil.

United States administrations ever since have justified aggressive foreign policies by lying and distorting the realities behind complex international relationships. In addition, when a politician, a journalist, a scholar, or a whole peace movement criticizes targeting nations and movements as diabolical and security threats, these critics are challenged as weak, indecisive, cowardly, and even worse, stalking horses for the vile enemy or enemies.

Campaigns of propaganda masquerading as truth have been a constant feature of international relations, particularly since World War Two. The reality of U.S. struggles against demonized enemies tells a sobering story. Deaths in wars and interventions in which the United States participated from 1945 until 1995 totaled about ten million people. These figures, extracted from the valuable research of Ruth Sivard, (World Military and Social Expenditures, 1996) do not include injuries and forced migrations of millions of people fleeing combat zones. Nor do these figures include the wasteful trillions of dollars of military expenditures and environmental damage resulting from a war system.

…Don Rumsfeld is, to use a phrase that is used too loosely but that certainly applies in this case – a ‘great American’ – and has been for decades. And if you want to look for a genuine model and prototype for your own careers, you could not have chosen a better role model than him. Mitch Daniels interviewed at the Rumsfeld Foundation, November 4, 2020. 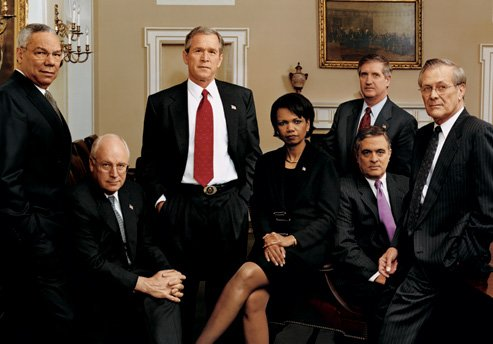 Neoconservatives, celebrants of war, have had a long and growing presence in the machinery of United States foreign policy. James Forrestal, the first Secretary of Defense in the Truman Administration, was a leading advocate for developing a militaristic response to the Soviet Union in the years after World War II. As historian Andrew Bacevich pointed out, Forrestal was one of the Truman administrators who sought to create a “permanent war economy.” He was, in Bacevich’s terms, a founding member of the post-World War II “semi-warriors.”

Subsequent to the initiation of the imperial response to the “Soviet threat” — the Marshall Plan, NATO, wars in Korea and Vietnam, the arms race — other semi-warriors continued the crusade. These included the Dulles brothers (John and Allen), Air Force General Curtis LeMay, and prominent Kennedy advisors including McGeorge Bundy and Walter Rostow, architect of the “noncommunist path to development,” in Vietnam.

Key semi-warriors of our own day, Donald Rumsfeld, Dick Cheney, Elliott Abrams, Robert Kagan, and others who formed the Project for a New American Century (PNAC) in the 1990s, gained their first experience in the administrations of Richard Nixon and Ronald Reagan. The PNAC view of how the United States should participate in world affairs is to use military superiority to achieve foreign policy goals. The key failure of Clinton foreign policy, they claimed, was his refusal to use force to transform the world. For starters, he should have overthrown Saddam Hussein in Iraq.

The neoconservative policy recommendations prevailed during the eight years of the George Walker Bush administration. International organizations were belittled, allies were ignored, arms control agreements with Russia were rescinded, and discourse on the future prioritized planning for the next war.

And concretely the United States launched long, bloody, immoral wars in Iraq and Afghanistan. Over 200,000 Iraqis were killed in the US war, thousands were displaced, and violence spread throughout the Middle East and Persian Gulf. And despite the 2003 Office of Management and Budget office prediction of Mitch Daniels that the war would cost $60 billion, recent estimates suggest the true cost of the Iraq war approached $3 trillion. Cost estimates, claims that the US troops would be welcomed as liberators, and the war would be over quickly all turned out to be false. Secretary of State Colin Powell’s declaration before the world that the Iraqis had weapons of mass destruction proved false as well.

Subsequent to the Iraq War, the United States has been engaged in overt and covert war, economic embargoes to bring down governments it does not find to its liking (Libya, Syria, Iran, the Ukraine, Venezuela, Cuba), and has spent billions more on the military (over 800 military bases in 39 countries) while its domestic infrastructure declines. Now, the Biden Administration is ramping up support for confrontations with China and Russia.

Lies and War Are a Testament to Citizen Skepticism

Getting back to Senator Vandenberg’s advice to President Truman about how to gain support of the American people for moral/military crusades, leaders and media are warning about a new global terrorist threat, this time cyber attacks and space weapons, and a renewed post-Soviet threat from Russia and China, a new Cold War. The intensity of the selling job is testament to the good sense of the American people who continue to say “no more wars.”