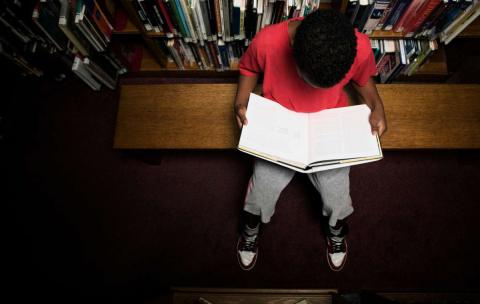 Neither kids nor teachers are simply one-dimensional victims of ignorant policy.

A favorite quote from Stanley Kunitz, two-time poet laureate of the United States, hangs on a wall in my classroom: “Poets,” he writes, “are not easily domesticated… and they can be outrageous; but they are also idealists and visionaries whose presence is needed… to clear the air of corruption and hypocrisy, to mock oppression, and to challenge [spiritual] apathy.”

Poets, yes, by all means, and teachers and students too, along with citizens and community members, researchers and artists, residents of every stripe and kind. Everyone is invited to clear the air of corruption and hypocrisy, to mock oppression, to challenge apathy — everyone, yes, and with a special duty and burden for teachers.

I’ve taught for more than 50 years, and my students today are all studying to become teachers themselves. They’re an idealistic bunch: They all want to do meaningful work, they all want to do good, and mostly they want to unleash the dreams of youth and change the world — step by step, one student at a time.

The idealism Kunitz describes is a vision most of my students aspire to — not a submissive naïveté nor the willful abandonment of reality, but rather a kind of leaning toward an ideal, embarking on the never-ending pursuit of new knowledge, novel insights and understandings, and that complex, fugitive concept called “truth.” Of course, they fall short — falling short is guaranteed, for enlightenment is always partial, and the truth, in any finished sense, always elusive — but that in no way diminishes the significance of their labor.

This immense journey asks these teachers to reject dogma, orthodoxy and superstition; to unstick themselves from a fantasized past when everything was settled and putatively perfect; and to dismiss the idea that the present moment is in any sense a point of arrival with nothing much up ahead. It encourages them to disregard notions of a fixed, preordained future with every conflict resolved, every synthesis achieved, every mystery explained. It urges them to get busy in projects of repair and renewal, posing new questions, struggling with unique problems. They feel — mostly — up to the challenge.

But, of course, this is not an easy time to become a teacher: The perennial problems of too few resources and too little support are now joined by a weaponized opposition to curiosity and inquiry itself. When Texas State Representative Matt Krause released a list of 850 books and advised school libraries to report whether they had any of the titles on his list, a school district in San Antonio removed more than 400 books. When the McMinn County, Tennessee, school board voted unanimously to ban the Holocaust graphic novel Maus from the school’s classrooms and library, a Tennessee pastor organized a book burning, live-streamed on Facebook, where books with “demonic influences,” including Harry Potter and Twilight, were fed to the flames. When Florida passed the so-called “Don’t Say Gay” bill recently, Gov. Ron DeSantis’s press secretary made its bigoted subtext explicit, calling it an “anti-grooming” law.

This is not an easy time to become a teacher: The perennial problems of too few resources and too little support are now joined by a weaponized opposition to curiosity and inquiry itself.

As governors and senators join the troglodyte chorus, it becomes increasingly clear that as terrible as banning authors like Art Spiegelman is in itself, the main targets are my idealistic students and English teachers anywhere in the country.

The main victims of this galloping censorship are children and youth, of course, but it’s important to note that while truth-telling can and is being banned in schools by state legislators and local boards, it’s a wide, wide world out there, and repression activates resistance. Neither kids nor teachers are simply one-dimensional victims of ignorant policy. Teachers are launching Banned Books Clubs and after-school local history study groups at high schools around the country, and the message is clear: You need no one’s permission to interrogate the world.

We’re reading The Life of Galileo by Bertolt Brecht in my class now, and the drama, the tensions and the contradictions feel eerily contemporary. Galileo’s breath-taking discoveries about the movement of the planets and the stars ignite in him the desire to pursue a particularly radical idealism: “The cities are narrow and so are the brains,” he declares boldly. “Superstition and plague. But now the word is: since it is so, it does not remain so. For everything moves, my friend.” Galileo seems at first unstoppable: “It was always said that the stars were fastened to a crystal vault so they could not fall,” he says. “Now we have taken heart and let them float in the air, without support, they are embarked on a great voyage — like us, who are also without support and embarked on a great voyage.”

Here Galileo ups the ante, questioning Church orthodoxy and challenging the establishment in the realm of its own authority. For the Church, the great voyage is a sanctioned and planned journey, the steps mapped out with precision and certainty, and with all the support we will ever need in the institution of the Church itself.

Clearly more than theories of astronomy are at stake. The findings of his research, surely, but also the joy, the excitement, the reckless hope, all mark Galileo as a radical visionary — he wanted to open people’s minds and change the world.

Galileo’s struggle is punctuated with joy and grief, hope and despair, pain and torment and pressure, but when he finally capitulates and denounces what he knows to be true, when he is received back “into the ranks of the faithful” by the Church, he is exiled from humanity — by his own words. In the end, he is confronted by a former student, one of his crestfallen disciples: “Many on all sides followed you with their eyes and ears,” he says, “believing that you stood, not only for a particular view of the movement of the stars, but even more for the liberty of teaching — in all fields. Not then for any particular thoughts, but for the right to think at all. Which is in dispute.”

The liberty of teaching and the right to think at all is a right that is in deep dispute in our schools now, and in the larger society.

Bill Ayers is a distinguished professor of education and a senior university scholar at the University of Illinois at Chicago (retired), and founder of both the Small Schools Workshop and the Center for Youth and Society, where he taught courses in interpretive and qualitative research, urban school change, and teaching and the modern predicament. A graduate of the University of Michigan, the Bank Street College of Education, Bennington College, and Teachers College and Columbia University, Ayers has written extensively about social justice, democracy and education, the cultural contexts of schooling, and teaching as an essentially intellectual, ethical and political enterprise. He is currently the vice president of the Curriculum Studies division of the American Educational Research Association.